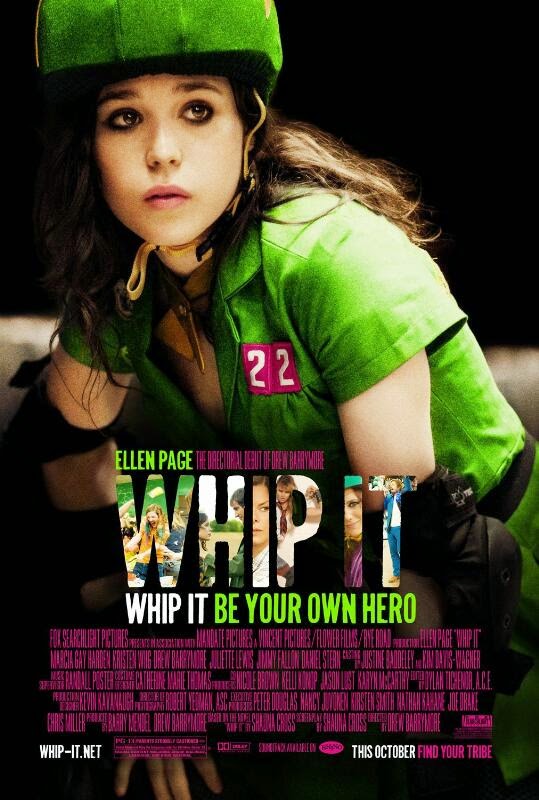 Tagline: "Be Your Own Hero"

She's been entertaining us in one way or another for most of her life, whether by her acting or her 'extra curricular activities', so I suppose it was inevitable that the delightful Drew Barrymore would eventually turn her talented hand to directing. But what sort of film would she choose? A romantic comedy like The Wedding Singer? Brainless action like the horrific Charlie's Angels? Or something similar to one of the many serious drama's she's starred in? Actually, no. It turns out to be something quite different. Something akin to the small-town American indies on which I'm so keen, but most other people haven't heard of.

Whip It is set in the world of the Roller Derby, which, to be honest, is a sport I had never even heard of before encountering this film. Nonetheless, it's an amateur contact sport practised primarily by women and contested by two teams of five each. Four players from each team begin racing around the oval track before the remaining member of each team known as 'jammers' start from further back. The jammers then have to race round and round the track attempting to pass as many members of the other team as possible. The players on that jammer's team attempt to clear a path for her while the opposing players try to stop them. For each opponent successfully passed, that team scores a point.

At the start of the film, however, Bliss Cavendar (Page) had no more idea what Roller Derby was than I did. She is a smart but somewhat directionless 17-year old living in a small Texan town called Bodeen. She is shunned by the 'cool kids' at school, has an unsatisfying job in a fast-food restaurant called the 'Oink Joint' where her best (and only) friend, Pash (Shawkat), also works, and she doesn't really have any interests or goals. Her mother, a former beauty queen, pushes her into entering pageant after pageant, and she goes along with it despite not really caring about them. During a shopping trip with her mother, however, Bliss encounters some roller derby players distributing fliers.

Immediately intrigued, she and Pash lie to their parents and travel to Austin to watch the clash between arrogant champions, the Holy Rollers, and perennial losers, the Hurl Scouts. Upon meeting Hurl Scout, Maggie Mayhem (Wiig) after the derby, she is invited to attend a tryout. After a bit of practise, she attends the tryout where she discovers she is one of the fastest skaters around and is offered a spot on the team! The only problem from here is trying to improve the losing attitude of her new team and dealing with the building rivalry with Iron Maven (Lewis) and her Holy Rollers. Around the same time as all this she meets budding rock star, Oliver (Pigg), at an 'after party'. They hit if off, but with so much of her time now being taken up by her new pursuits, her friend and parents have to take a back seat.

As mentioned, I had no idea what a 'Roller Derby' was before I saw this film, but if it's really anything like this, it looks pretty damn entertaining! It's an interesting subject on which to base a film, and Drew Barrymore, who also has a co-starring role as fellow Hurl Scout, the violence-loving Smashley Simpson, looks like she's having a fantastic time, both on-camera and off. The diminutive Ellen Page is as lovable as always (okay, maybe not Hard Candy) as Bliss, showing once again she's more than just a little cutie - despite her being a bit selfish, she'll still have you cheering her all the way. Whilst perhaps a little stereotyped, Pigg also does a decent job as confident, brattish rock singer, Oliver.

The main players are all very well supported too. I've long been a fan of Juliette Lewis and she's bang on form here as the cocky and ruthless star player, Iron Maven, and the other players including Eva Destruction (Graynor), Bloody Holly (Bell - Death Proof), and Wiig as Bliss' new friend, Maggie Mayhem, are all great fun to watch. Before you ask, yes there are some males in the film too, although not many! Andrew 'brother of Owen and Luke' Wilson is the Hurl Scouts team manager, Razor, who takes great pride in his 'playbook' (which of course the team dismiss as nonsense) and event compère, Johnny Rocket (Fallon) has a lot of fun with his innuendo-laden commentaries. Bliss' parents (Stern and Harden) do a lot with their limited screen time too, with the latter suffocating Bliss with her controlling ways while her father just sits back, happy to let his wife be burdened by her.

Lastly, lovely little Alia Shawkat has grown up a bit since I last saw her in Arrested Development but she's still endearing and makes a great 'best friend' as Pash. Hope to see more of her soon. The bottom line is, I watched this film because I liked Ellen Page in Juno and was intrigued to see Drew Barrymore's directorial début, plain and simple. I'm not sure what I went in expecting, but this definitely wasn't it! However, to say I was pleasantly surprised in an understatement - the events depicted are entirely inconsequential to all but those most directly involved, but that doesn't stop this film from being an absolute joy to watch for it's entire length. This is exactly the kind of film I like - well cast, good acting, decent story, etc, but beyond all that, interesting, earnestly portrayed characters that you find actually yourself caring about.

Special mention also goes to the absolutely fantastic soundtrack. As is often the case with movie soundtracks, you'll probably not have heard of half the bands here, but the songs are almost all great and perfectly selected for their scenes, with the roller derby songs in particular suiting the action to a tee. So, Drew Barrymore's career as a director is off to a damn good start. Considering those involved, I was expecting this to be a pretty entertaining film, but it ended up being an even more thoroughly enjoyable 100-odd minutes than I thought, and one that I'll undoubtedly sit through many more times! I'm sure it won't appeal to all - it's not a sugar-coated chick-flick or a gun-laden blokey action film. What it is, though, is the best film I've seen this year so far...