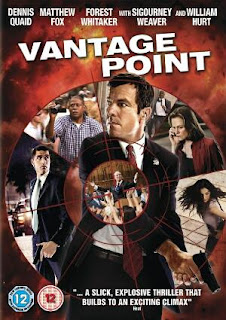 He gets a lot of stick but it's a tough job being the US President. Everyone wants to shoot the guy for one thing, if good old Hollywood is to be believed at least! This particular President, Henry Ashton (Hurt) is in Salamanca, Spain, about to address a large crowd regarding the anti-terrorism treaty he's about to sign. Soon after he begins, someone, from somewhere, shoots him. In the midst of the ensuing panic, there are two explosions. Before and during these events, we are casually introduced to several people in and around the crowd who may have an interesting perspective on the unfolding chaotic situation. Some may have something to hide, some others may be able to help catch those responsible. It's up to Secret Service Agent, Thomas Barnes (Quaid), to work out which.

The events leading up to and immediately after the gunshot and explosions are then replayed through the eyes of each of these people. First is TV news producer, Rex (Weaver), who is in her production room watching various cameras filming the events, trying to make sure she has all angles covered. Then, events rewind and we see them through Barnes himself as well as his Secret Service colleague, Kent Taylor (Fox) as they are rocked by the explosions and bedlam breaks loose. Next we see events unfold through Spanish cop, Enrique (Noriega), American tourist, Howard (Whitaker), and several others including the perpetrators themselves, before the timeline finally continues and Agent Barnes races to uncover the terrorists deeper plot and untangle the mess before anyone else gets hurt whilst those involved race to prevent him!

It's a concept that's been done before, but perhaps not in such a high profile film. Whether it works well or not is debatable. Both I and apparently a test audience soon grew tired of the film rewinding to the start despite the fresh perspective offered by each character. However, the story is intriguing enough after to hold your attention and the initial frustrations soon die down as you enjoy the mounting tension as more and more information is revealed. The relatively inexperienced Travis directs the numerous action scenes well, including some fantastic chase scenes of both the foot and vehicular variety, and there is some nice camera work, particularly the multiple views of some parts of the rewinding sequence.

The cast assembled here is by and large a highly talented one but it is also pretty large. Some seasoned actors therefore don't get the screentime their talent deserves, notably Signourney Weaver, but of the ensemble, Quaid probably gets the most. He remains as watchable as ever as Thomas Barnes, the nervous Secret Service agent on his first Presidential assignment since taking a bullet protecting the President six months earlier. Forest Whitaker too, is enjoyable to watch, but the role doesn't really ask too much of him. I guess the same could be said of many other cast members, but as action-thrillers go, you could do a lot worse than this. Some people will probably hate the same few minutes being replayed over and over, instead impatiently wanting the story to continue, but when it does, you view the proceeding with fresh insight over all those concerned. It doesn't set new standards for any of the sub-genres it covers, and it could've possibly been a bit longer, but as a standard terrorism/assassination/kidnap/chase thriller, it's and interesting and exciting 90 minutes.