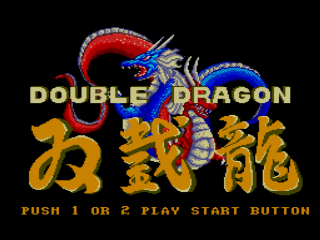 Almost all games have their fans and detractors, and now and then, particularly passionate residents either side of the fence engage in fierce fights and arguments regarding the game in question. Among the biggest I remember back in the 80's were the epic Double Dragon Wars. The arcade game was immensely popular and to say conversions of it were eagerly awaited is putting it mildly. When they arrived, they were met with... indifference from many. But the die-hard fans vigorously defended them, and of course but there was also a lot of criticism. Obviously some versions were better than others, but the only one I've played is the Master System version. But how did it fare? Did it prove as controversial as many of the other versions, or did fans finally have the definitive version they were looking for to finally end their arguements?

Taking the tried and tested route of girlfriend-gets-kidnapped-by-evil-criminal-gang, in this case the 'Black Warriors' gang, the 'Double Dragons' of the title are in fact twin brothers, Billy and Jimmy Lee (which makes you wonder how they distribute the affections of the girlfriend, Marian). In order to win her back, the brave brothers must fight through four long stages filled with the sort of no-good thugs and criminals you might expect to find in such places, with each one ending in a boss fight. Initially armed only with their fists, they have a few moves available with which to dispatch these punks including punches, kicks, elbows, jumping kicks, etc, and they can even gang up to double-team opponents. Some of the more ruthless enemies carry weapons such as baseball bats and whips. If you can knock over one of these, the weapon is then available to use yourself which is very handy as they're obviously much more powerful! Even better, you will occasionally come across helpfully discarded steel drums, boxes, etc, which can be picked up and thrown at the bad guys!

Graphically the game is a bit of a mixed bag. From static screenshots it probably looks like one of the best versions of the game outside of the arcade, and the four stages are nicely varied, consisting of inner-city streets, a factory, a large wooded area, and finally the big boss' hideout. The sprites aren't enormously varied but all look suitably thuggish. However, the problem is a familiar one for Master System fans - sprite flicker. Lots of it. It's often easy to overlook this problem with Master System games as it doesn't usually affect proceedings to any significant degree, but this is one of the worst cases I've seen on the poor old MS. The on-screen action is sometimes hard to discern when things get busy, especially when playing in two-player mode, and when there's several characters close together you may end up wondering where your guy is at times. It's not the end of the world though as there are seldom more than three enemies on the screen at once, and this is still a highly playable and addictive brawler.

Top quality fighting games are hardly prevalent on the little Master System, and even with the problematic graphics this remains one of the best. It could do with a few more moves, but it's fast-paced, very playable, and control over your character is good and responsive. The music and sound effects are pretty good too and the game offers a decent, though not impossible challenge. It can be a bit frustrating and your energy bar will sometimes dimish at an alarming rate, but luckily you have infinite continues (until the last stage) and, as a two-player scrolling fighting game, it offers a rare treat nonetheless. Even including offerings on other systems, until Streets of Rage came along, this was for a long time the zenith of two-player scrolling fighting games for me and my good friend (and scrapping partner), Luke, and even now we still have a riot playing it. Just wish those graphics didn't flicker as much!