As retro gamers, we, by our very definition, have been playing games a long time. During this time, only the most privileged of us had the luxury of access to most or all of the systems available. Most of us had to make do with just one at a time, and often not even the system of our choice either. I didn't really know much about home computers when my parents bought me a ZX Spectrum for Christmas but luckily it turned out they had made a good choice. 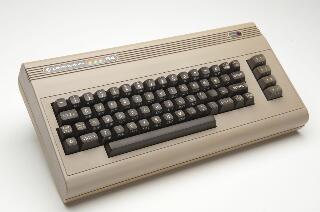 I soon discovered that some of my friends also owned Spectrums, including one of my best friends, Stu. A couple of my other friends owned Amstrad CPC's, including my other best mate, Luke. I did not, however, know anyone who owned a Commodore 64 which, looking back, is pretty strange! Not long after becoming a Speccy owner I also somewhat predictably became a Speccy fanboy and began looking upon the C64 as an inferior rival machine, something which the lack of any C64-owning friends made worse. As a result of this, I have to this day not played any C64 games! As you might imagine, as a self-professed retro gamer, this is an entirely unacceptable state of affairs! To this end, I have decided that I must immerse myself in the world of all the computers and consoles I missed the first time around due to having a rival machine, or for some other reason, and I will start with the much-loved Commodore 64.

My original idea was to ask my fellow Retro Gamer Forum members to vote for a single game that they felt best represented the old beige breadbin, and then do a detailed report on that, but I was soon besieged by many suggestions covering a great variety of genres. So, instead I will have a quick play of some of these titles and present my first impressions of both the games themselves, and the system generally, here in this series of features.

The first game I tried (and, historically for me, the first C64 game ever played) is: 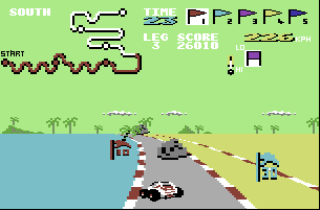 This is one I've heard about ever since it first came out but never got around to playing on any system. I've long heard, however, that the C64 version is the best. So... the best version of a previously unplayed but highly regarded game... Seems like as good a place to start as any! In my experience, into-the-screen racers are rarely enjoyable on older systems so to find that this is an instantly accessible and playable game is all the more pleasing. As most of you will no doubt know, the game involves racing around each of the five courses to a fairly strict time limit. Driving through gates and collecting flags earns you points, whilst hitting any of the many objects that litter each course (such as rock, walls, barriers, etc) costs you valuable time. I've really enjoyed playing this highly-regarded classic. The graphics are a bit blocky (one of the things I used to use in my anti-C64 arguments!) but there's nice use of colours and it's great fun and very addictive. I'll definitely be returning to this one at some point. So, we're off to a good start! 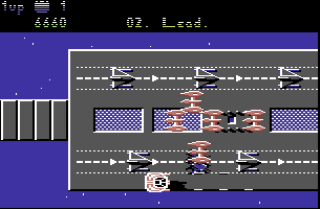 I think I played this very briefly on my Speccy but this represents my first go on it proper. It's a fairly unique game in that it's both a horizontal and vertical scrolling shooter! In other words, it's viewed from above but scrolls horizontally, and it's a little disorientating to start with. To be honest I found it really tough going - in addition to the odd viewpoint, it seems to be something of a trial and error game with seemingly unassuming ground objects causing death but others not. After quite a bit of practise however, I made some progress, as you can see from the screenshot! Graphically I found it a bit drab and I don't like the sprite for the ship you control (the 'Manta'), but the music and sound effects are pretty good. It's very addictive too - it's one of those shmups that's tough but one that you're determined to do well at. Another good one then, and one I'll be playing again. Having said that, I can't imagine I'll be seeing all fifteen levels any time soon! 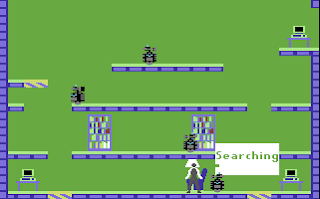 I actually had (and still have) this on my good old Master System, so this version is actually a slight step down for me. However, it and its sequel are most famous as C64 games so I thought I'd give this version a go too. Running and jumping around the multi-platformed complex of Professor Elvin Atombender remains as playable and addictive as it ever was and I can see why this version was so popular. Control over your athletic avatar is as precise as you would expect and, after some practise, some pretty lengthy sessions can be enjoyed. However, the problem that I experienced in the MS version is also a problem here - those bloody puzzles! I was never much cop at them and I'm still flummoxed! A timeless classic though, to be sure. 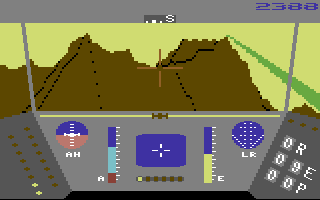 Whilst I had heard of this game, I really didn't have a clue what to expect, so after loading it and flying aimlessly around the jagged landscape for a while, I figured I'd better try to find out how to play it. A brief period of research later and I actually made some progress! Apparently the goal is to fly around looking for downed pilots and rescue them. Of course, there's more to it than that - you have to actually land your craft near the pilots, cut the power, wait until they run over, then let them in before they die in the poisonous atmosphere whilst lots of mountain-top guns try to stop you! I enjoyed getting the hang of this one and was particularly proud of myself when I rescued my first pilot, but I still found it to be a bit aimless - I was flying around for about 10 minutes without finding a pilot at one point. Still, perseverance will no doubt pay dividends and persevere I will. 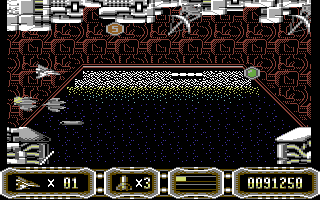 After having this one recommended I was surprised to see how late it was released. I was well into blasting away on my MegaDrive by this point so it's little wonder I've never heard of it. If I had played it during that period though, I'm not sure it would've been a huge step down - this is impressive stuff! Clearly taking its inspiration from other classic shmups, notably R-Type, this game really shows what the C64 is capable of. Featuring fast, numerous sprites, both decent in-game music and sound effects (even the Amiga rarely had this!), silky smooth scrolling, and plenty of challenging, addictive shooting action. On first impressions at least, this is the best shmup I've played on any 8-bit computer.

So, after playing my first five C64 games, I'm now starting to get a good idea of what the system was like. First impressions are excellent but I'm not finished yet! I'll play a few more yet before giving my final verdict on the classic micro, so look out for the next five!

Exploring the Commodore 64 - Part 2
Posted by RetroKingSimon at 11:19