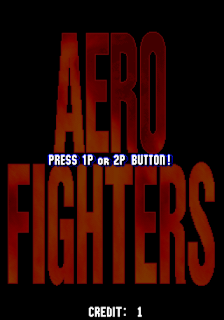 As any self-respecting shmup fan knows, now and then comes a game that, despite not being hugely remarkable in itself, goes on to prove very important in the genre at large. Aero Fighters is among these. Obviously it wasn't the work of just one person, but having a significant role in its creation while working at Video System was a certain Shin Nakamura. Shortly after its completion, he and a few colleagues left to form the now legendary Psikyo who went on to create some of the finest vertical scrollers seen during the remainder of that decade and beyond, including such classics as Strikers 1945, Gunbird, Sengoku Blade, and Zero Gunner. Not all of Psikyo's great shmups drew inspiration from Aero Fighters (perhaps more commonly known by its Japanese name of Sonic Wings), but all of them owe it a debt. 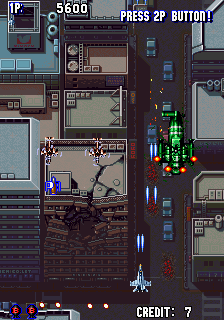 Like most of the Psikyo games that followed, Aero Fighters is a vertical scroller, on this occasion a military-based one. Before play begins you are given the option of choosing from four pilots, each representing a different country, and each possessing a different attitude in their outbursts in the between-level cut-scenes. The US pilot is predictably cocky ("I'll fly anywhere at anytime!"), the Japanese one is all business ("Next mission..."), the crazy Swedish guy just laughs each time, and the British pilot is only interested in his bit of skirt ("Enemy took my bride"). Each of them also flies a different jet fighter (based on real aircraft) equipped with a powerful, rapid fire main cannon as well as a screen-clearing smart bomb style attack, although you only get two of these per life. 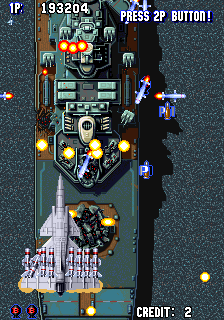 The main cannon on all the jets can be powered-up four times by collecting the floating icons left behind when you destroy some of the larger enemies, although the power increase from the fourth upgrade is only temporary. You will also find addition smart-bomb icons now and then but that's the extent of the weapon upgrades in this game - no giant, screen-filling beams of death here, you have to do your despot-vanquishing the old-fashioned way! One nice feature present here is the way you play through the stages. They are set in various countries around the globe, with the first three you face being in a random order. The pilot you select doesn't face a stage in his home country, so each time you play the game may present the different stages in a different order. Which is nice. 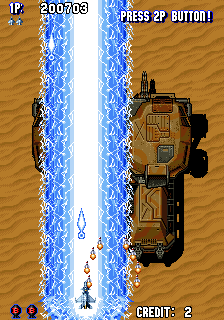 After completing the first three stages, taken from the four pilots home countries, there are four more stages for you to battle through, in a set order this time, before the evil terrorists are defeated. It's a great approach to a shmup and one that sees you return to it over and over again. Of course, it doesn't hurt that it's a damn fine blast too! Graphically the game is pretty awesome. Aside from the bosses, the sprites are fairly samey - jets, helicoptors, tanks, gunboats, etc, with minimal animation, but later on some more interesting ones appear, and the bosses are pretty impressive throughout, especially the giant transforming tank thing (in the shot to the left), and the smart-bomb effects (one of which is also featured to the left) are awesome, as are the fantastic backgrounds! 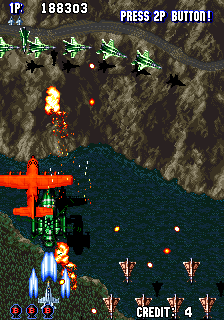 Sound-wise, there's not too many effects, but those that do exist are great with a particularly satisfying shooting sound, and most of the music is great too, especially on the stage with aircraft hangars in the mountains! However, as you might expect if you've played any of Psikyo's games, Aero Fighters is really tough going! Luckily you can continue forever as long as you keep pumping in the coins (or pressing '5' on the keyboard!). The enemy onslaught is relentless here and their bullets move really quickly most of the time too - on some occasions it seems impossible to not lose a life, and things do border on 'bullet-hell' insanity at times. Hard or not though, no one can deny that playing this game is an exciting, adrenaline rush of an experience, especially for two players at once, and the short time you'll likely be playing for makes it one of the most addictive shmups I've played!