Anyone who grew up in the 80's and had a classic 8-bit micro would have worshipped the game compilations that appeared regularly throughout the latter half of that decade, and with good reason - a single new game would cost us upwards of £8, so who could say no to a collection of five, sometimes even more, games for a pound or two more? Whoever thought them up was a hero to all of us Spectrum, Amstrad CPC, and Commodore 64 owners! I was a proud Spectrum owner and of all the years I enjoyed gaming on it, a large percentage of this time was spent with compilations and the treasures contained therein. Here are my favourites:
5 - The In Crowd (1989)
I remember for many years my favourite Spectrum mags were going on and on about this one but it was one of the few 'big name' compilations I didn't own. It wasn't until the 8-bit era was coming to an end that I finally managed to get hold of a copy. Was it worth the wait? Well, it has some decent games that's for sure: Karnov, Gryzor, Barbarian, Crazy Cars, Predator, Combat School, Platoon, and Target Renegade. While it's true there's not many classics on here, this compilation still proved amazing value for money by sheer weight of numbers! 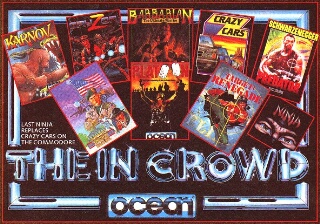 4 - Arcade Muscle (1989)
This is another one I got quite late on, but given my love of arcade games and conversions of them, it was inevitable it would make an appearance here! There's a bit of everything too. Platform fans get the rock-hard Bionic Commando to vex them, car (and shooting) fans get the never-ending Road Blasters, shmup fans get one offering of each type with the fantastic Side Arms and 1943, and lastly fighting fans are also catered for by the original (and oft-forgotten) Street Fighter! Quite amusing to see after playing the later games in the series, but it's a decent enough Speccy brawler all the same. A nice variety of highly playable games from US Gold. 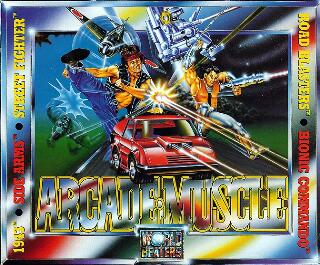 3 - Giants (1988)
Say what you want about the OutRun conversions, but I still enjoyed the Speccy effort included here, monochrome graphics and all! The only game here I didn't play much was 720 and that's just because I didn't really 'get' it. California Games is here and as much fun as ever (I particularly enjoyed the BMX event on this version) and Gauntlet 2 and Rolling Thunder are both fantastic games, and great conversions too. The latter is rather hard but very playable, and Gauntlet 2 is... more of the same old Gauntlet action really, but who's complaining? 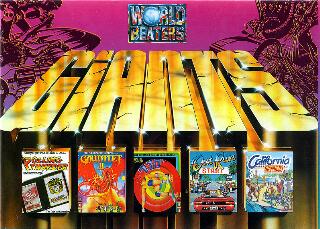 2 - Magnificent Seven (1988)
A bit of a stupid name considering it had eight games on it (although one them was 'free' to enable Ocean to still use the catchy moniker). I had this one for near enough the entire time I had a Speccy. I remember my sister and I having great fun trying to work out what to do in Frankie Goes to Hollywood's minigames thanks to this one, and it also led to my lasting affection for Arkanoid and Head Over Heels. The other games weren't bad either - The Great Escape, Yie ArKung Fu, Wizball, Cobra (by the late, great Jonathan 'Joffa' Smith - RIP), and the slightly wiffy Short Circuit. Cracking compilation and nice variety too! 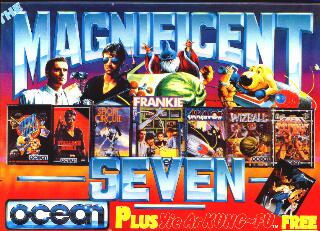 1 - Taito Coin-Op Hits (1989)
Yeah, good old Taito! A compilation featuring eight games is good enough, but eight Taito games? They have long been one of my favourite games developers and this is one big reason why (or eight). I was already a big Arkanoid fan by the time I got this, so to find Arkanoid 2 included alongside the first game here was great news, and there's some equally great news if you're a vertical scrolling shmup fan with the amusingly-named Slapfight as well as the blinding Flying Shark included, both receiving great conversions, particularly the latter. Fans of close-quarters combat are accounted for with Rastan, Renegade, and Legend of Kage providing many hours of violence. Lastly, we have the immortal Bubble Bobble. The only thing that could've made this collection even better is the inclusion of The New Zealand Story! Taito Coin-Op Hits is, in my opinion, the Spectrum compilation with the consistently highest quality of games on it. I'd certainly be impressed if there's any better! 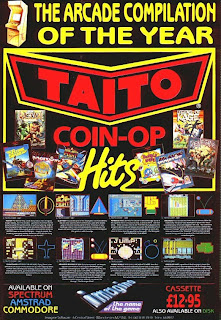