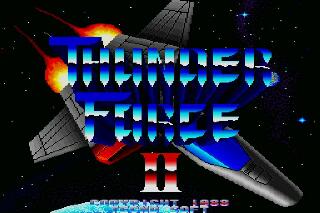 My quest to uncover the origins of the much-loved Thunder Force series has led me to some interesting systems. The next? The Sharp X68000. After having finally used one of these fabled machines, albeit under emulation, I'm unable to decide if Sharp were geniuses or idiots. For the X68000 is apparently a system of formidable power and impressive abilities. So how did they manage to keep it from everyone outside Japan? During the course of its life it was famous for the standard of its arcade conversions, but there were a few original games released on it too, and among them was Thunder Force 2. Contrary to popular belief, this was also the first system to see it too.

As any regular Red Parsley readers may be aware, I had an absolute bloody nightmare trying to emulate the systems that host Thunder Force 1. The 'Win68kHighSpeed' emulator I used was much better than the PC-88 and 98 nightmare I had a few months ago (it even supports control pad use!), but it was hardly bereft of problems. Fortunately, however, I was able to get TF2 running on it, and when I did I was a little surprised - it didn't even cross my mind that Sharp's little machine (well, I say little but it was actually more like a mini-tower PC!) would be able to give the mighty MegaDrive a run for its money, but it damn near ended up showing it up! This was one of the first games I ever got for the MD and that's the only system I've ever played it on, so any differences present in this earlier version would be immediately apparent. And there were lots!

The first difference I noticed was the graphics, naturally, and having now seen both the versions of TF2, it's hard to say which looks the nicest. The side-viewed stages look more or less the same to my eyes but the overhead stages do not. There are different enemies between the versions for one thing, including a cool/annoying flying caterpillar thing that follows you around, and the sprites seem to be a little smaller here too. The biggest difference, however, is the backgrounds which feature some nice transparency effects and parallax scrolling. This is most noticeable on the first stage around the water areas but can be seen on others too. As can be seen to the right, the overhead stages on the X68000 version also have a handy map to show the location of the bases, the destruction of which is of course the object of these stages.

The difference that was next easiest to notice was the difficulty. As you may recall, my ability to explore the world of Thunder Force 1 was hampered by its extreme difficulty level. This game isn't quite as bad as that, but it's a lot closer than the MD version! For example, when playing TF2 on the MD, I can finish the first stage in under a minute with no lives lost. Here, it took me a good few restarts before I even got to the second stage! I have since found myself wondering if it's even possible to finish this version without cheating! Suffice to say, it's tough going. One other major difference between the two versions of TF2 is that this one has two extra stages - one overhead and one side-viewed, the former in particular being somewhat reminiscent of the Dyradeizer stage from TF1. They look a little dreary compared to the other stages but they at least retain the great aesthetic variety between stages.

The only other differences I noticed between the two versions are the existence of a short intro-sequence featuring static images with text overlaid, and the fact that the speech is clearer on the X68k (and more plentiful - listen for the profanity when you lose your last life!). The superb music is all the same here and the game plays the same, just except it's a lot harder! It's still a very playable game and I'm glad to have finally played this original version
of it, but I think I'll stick with
the MD version for enjoyment
purposes!