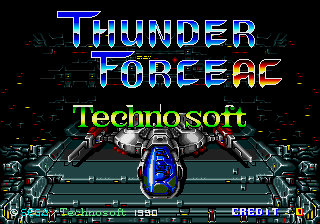 Despite having two quality prequels, it was Thunder Force 3 on the MegaDrive/Genesis which really saw Techno Soft's innovative franchise take off. So much so in fact, that later in the same year that they lit up the MD's release schedule, its amazing success convinced them to take the unusual step of quickly creating an arcade version too! Developed by the same team and released by Sega on their own arcade hardware, the game was to all intents and purposes a 'Directors Cut' of Thunder Force 3. Whilst initially appearing to be a direct port of the MD game, it is actually home to a few unique features. Aside from some slight cosmetic changes, however, it takes a while to discover what is new here.

After taking a while to get to grips with the controls (they're in a different configuration to my preferred layout on the MD) I soon started slicing my way through this game in a very familiar way. As I mentioned, there are some minor cosmetic differences between this game and TF3 and that's probably most noticeable on the first stage which features a more brightly coloured background and some different sprites (notably the Sunflowers of Doom which now appear to be cybernetic). The second and third stages also feature some minute foreground changes and a few sprite redesigns (particularly Seiren) and some enemies appear in different positions or formations, but to the untrained eye these first three stages will seem identical.

Upon reaching the fourth stage, however, it becomes more apparent what changes Techno Soft made to the game. Replacing the fourth stage is an entirely new one set in an asteroid field and some sort of old, abandoned base which culminates in one of the tougher boss fights in the game against one of ED-209's buddies. Replacing the icy world of Ellis is another new stage, but for this they looked to the last game in the series for inspiration. Yep, as the eagle-eyed among you may have already spotted, the fifth stage here is amalgamation of of the sixth and eigth stages from Thunder Force 2! They've done a pretty good job with it though and it's arguably better, and certainly more challenging than TF3's offering. The final stage here is pretty much the same as TF3's, though with the same sort of cosmetic adjustments as the first three.

All of the stages in the MegaDrive game featured hidden power-ups here and there which for the most part have been repositioned here, but the power-ups generally are far more plentiful too. As well as being delivered by the nippy little red ships, they can also be found simply floating in space now too which obviously makes the game a little easier and it wasn't the toughest shmup in the world to start with! It also helps your hi-score too as collecting a power-up that you've already got will see you awarded with 10,000 points (this happened in TF3 too but was much less common). Sound-wise, Thunder Force AC is nigh-on identical to TF3 with all music and sound effects returning unscathed with only slightly better quality speech to show for the added power of the arcade hardware, but considering TF3 has one of the best shmup soundtracks ever, this is no bad thing! There is also a couple of new tunes too but they're not quite up to this high standard.

It's a testament to the instant awe Thunder Force 3 inspired and its immediate success that not only was an arcade version commissioned, but so soon after the MD game was released too, but it's also little strange considering it's usually the other way around. It might've made more sense to unleash the sequel in the arcades first, then convert it the the MD, SNES, etc but nonetheless, it was the existing MegaDrive game that saw an arcade release and Techno Soft have at least tried to make a few changes. I've played TF3 so many times now that I'm bound to miss the levels that have been replaced here but their replacements suit the game well too. This is still probably a bit too easy for an arcade shmup though - Techno Soft should've ramped up the difficulty level a notch or two rather than made it even easier, but it's still an amazingly playable game of stunning quality in all areas without question. Besides, any means of broadening the fanbase of the awesome Thunder Force series is fine by me!