Hello and welcome to a new Red Parsley feature! As regular Red Parsley readers will know, my game reviews tend to be somewhat on the lengthy side. This is purely because I like to get the details as accurate as possible, but it does end up making each piece a rather time-consuming affair. This new feature will consist of much shorter reviews and my general first impression of the game in question. Some of them may be expanded into full reviews at some point, others will not. Hope you like them! 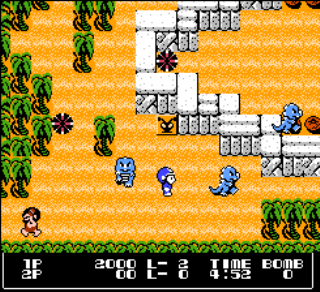 Having recently had a look at an entertaining maze game starring Doraemon, I thought it would be nice to see the game from which it was derived, and I was quickly able to see not only where the two games are similar, but also where they're not. The amusingly-titled Booby Kids is not set in such confining mazes as the later PC Engine game but it does have some things in common with it. Enemies are dealt with by digging holes and then burying them inside, and both games feature the same objective - namely, to collect all the items in each area (which look like pumpkins this time) to unlock the exit and progress to the next area. The graphics are actually pretty nice here featuring some appealing scenery and sprites and I particularly like the cheerful music. The game is very entertaining to play too, and unlike Doraemon's game it actually offers a decent challenge. The only problems here are somewhat sluggish controls, which I guess I could live with, but also that the whole stage resets when you lose a life. This is a real shame as it pretty much makes this a one-life game. A nice surprise initially but with a sizable flaw.