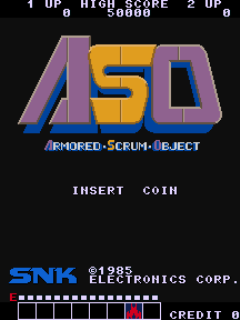 You know, the history of videogames can be funny. As genres were born, some examples of their games were forgotten almost as soon as they appeared while others went on to be remembered as landmarks, even legends in the years to come. The ones most fondly recalled were generally the most playable, not necessarily the most innovative, and that brings me to ASO (or Alpha Mission as most will probably know it). I must confess that I'd never seen or played it before undertaking this feature. I had vague knowledge of its sequel on the Neo Geo, but this original? Not a clue. When I started playing it though, I was rather pleasantly surprised for, as it turns out, ASO is a very innovative game considering its age! Is its obscurity a blip in history or is it deservedly ignored? 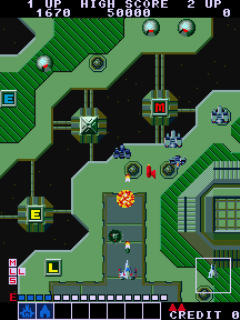 Its innovation doesn't extend to its story though! Yep, it's the same old nonsense - evil aliens attacking Earth, blah, blah, blah. In this case, seven waring races from the Tetranova galaxy have been fighting with such ferocity that all their homeworlds have been destroyed. Finding unity in their newfound homelessness, they have joined forces to find a new home on which they can recover and rebuild their fleets before going to war once again and, as you may have guessed, that new home they've selected is Earth! Eeek! Fear not though, as you've been given the chance to kick them off using the SYD attack fighter, which for once isn't an 'advanced prototype' either! Using this ship you must fight through twelve areas before Earth can be saved and peace restored to one and all. 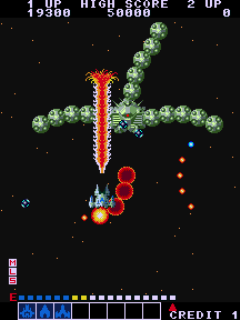 One of the first things I noticed about ASO is that the twelve vertically-scrolling stages generally feature just as many targets on the ground as they do airborne ones. To that end, the SYD fighter is capable of firing its laser cannon to take out the squadrons of various enemy craft but it can also fire missiles to destroy ground targets. Many of the latter include several types of gun turrets, but there are also many parts of the scenery that can be destroyed and it's in the smouldering remains of these that the game's many power-up icons can be found, and this is perhaps what impressed me most about the game. Yes, its mixture of airborne and ground-based targets is somewhat reminiscent of Xevious but the plethora of collectible icons here is impressive for such an early game! 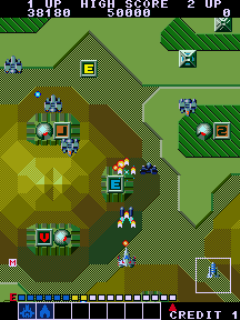 This is also where things can get a little complicated! The icons are marked by both letters and colours. Those marked with 'S', 'L', or 'M' will upgrade the SYD's speed, laser power, and missile power respectively, but the ones marked with 'E' will gradually increase your energy meter which powers the various weapons or 'armors' available. The SYD has two of these permanently - the lasers and missiles - but the others must be collected and each is split into three pieces. Once all three pieces of a given armor are collected it is available for use, but only once your energy reserves have reached a sufficient level too. Once this happens you can select which armor you wish to use (only out of the ones you've collected of course) and unleash it accordingly! There are eight different collectible armors altogether and aside from a shield they are all offensive including more powerful cannons, super-missiles, and energy beams, right up to a powerful smart-bomb style attack. Using any of them will deplete your energy and they only last for a limited amount of time or number of shots, plus some are better in certain situations than others, so strategic use is advised! There are many other icons to be found too - twenty in total, amazingly - and even one of my sizable reviews isn't big enough to go into all of them, but suffice to say it's possible to upgrade and downgrade your ship's various attributes and, mercifully, there are also icons that let you keep your various power-ups after a life is lost, one each for speed, lasers, and missiles. 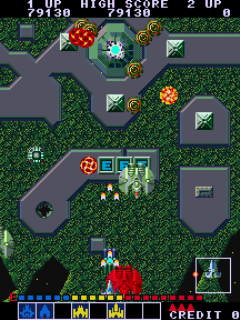 Other icons include ones that increase the size of your energy tanks, ones for warps and bonus points, extra lives... all sorts of things, and as long as you keep firing those missiles, the landscape will be littered with them, and that's probably the best thing about this game - your progress is almost entirely down to intelligent collection and use of the millions of icons or 'energy tiles'. In spite of their numbers, however, the stages themselves are constantly busy with lots of small enemy fighters flitting backwards and forwards taking pot-shots at you, punctuated by the occasional larger, more powerful craft, but the end-of-level bosses are very challenging, at least at first before you adapt to their attacks and learn a few tricks. Some even fire homing-bullets which are really annoying! 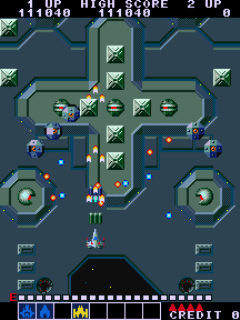 This combined with the slightly sluggish controls and the fact that the collision-detection often makes your ship seem to be a little bigger than it is conspire to make this one tough game! While the music and sound effects are merely functional, the graphics here are pretty impressive. The stages aren't enormously varied despite seemingly being set on both spacestations and on planets, but the sprites are varied and well-detailed too and the great use of colour means things rarely get confusing. This is all impressive enough anyway but when you consider that ASO was released in the same year as the legendary but more basic Gradius, it's pretty amazing! SNK have managed to pack a huge amount into this game - its twelve stages, twenty power-up icons, and eight weapons is far in excess of anything else I've seen from other games of this age and on top of that it's great fun too, if a little hectic. It's very much a game where practise pays off though and I'm now greatly looking forward to giving the sequel on the Neo Geo powerhouse the once over! Ultimately the few little niggles mentioned prevent this from being a top-ranked blaster but I'm still very surprised it isn't better remembered.