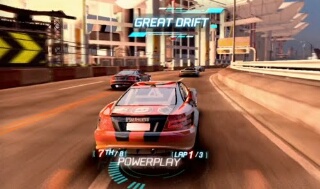 Playing this game was actually something of a landmark for me. It was at the R3Play gaming expo when my good friend, Luke, beckoned me toward the unknown - an Xbox 360. That's right, playing this game represents the first time I'd ever played any game on a 360! I remembered seeing adverts for Split/Second in magazines but I didn't really know anything about and neither did Luke as far as I know, but we courageously took up the challenge nonetheless and picked up the 360 controllers (wow, wireless!). The next few minutes (well, I think it ended up being about an hour!) was a gaming session sufficiently awesome enough to even convince me to finally buy a current-gen console, for it turned out Split/Second is a super-fast, super-exciting arcade-style racer of just the type I like. It kind of reminded me of a cross between Motorhead (the PS1 game, not the band) and Burnout (before EA screwed it up), particularly the latter as far as the awesome handling and drifting is concerned, but it's definitely no pretender. This is a fantastic racing game with a lot more to it than you might at first think, and I'm eager to discover all of it for myself!