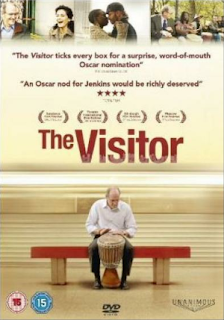 Tagline: "Connection is everything"

Thomas McCarthy is a talented fellow. He's primarily an actor, featuring in films like Meet the Parents, Good Night and Good Luck, and 2012, as well as a few TV shows too such as Boston Public and The Wire, but he is also a talented writer and director, and it's these ventures of his in which I am most interested. As many will probably not be aware, Tom's screenwriting abilities have brought us the superb Pixar adventure, Up, but he also wrote and directed one of my very favourite films, The Station Agent, a low-budget but superbly crafted exploration of loneliness featuring some fantastic performances from its four main actors. The critically-acclaimed film, his directorial debut, went on to win numerous awards and plaudits and showed great potential for any future projects, but his sophomore effort was a long time coming.

Like McCarthy's previous film, The Visitor features few principal actors and follows a similar theme, albeit in markedly different circumstances. Walter Vale (Jenkins - Six Feet Under) is a widowed college professor from Connecticut who has grown rather anti-social and now lives his days alone and unfulfilled. Upon being asked by the head of his department to present a paper in New York, he reluctantly agrees and travels to the apartment he keeps in the city only to find an illegal immigrant couple living there (Sleiman and Gurira). After initially kicking them out, he takes pity on them and lets them stay there with him. Wary of each other to begin with, Walter and Tarek gradually forge a friendship which soon takes a dramatic turn when the latter is arrested and taken to a detention centre and his worried mother (Abbass) arrives in New York looking for him.

It seems clear to me that Tom McCarthy strikes up a great relationship with his actors. Evidence of this can be seen by the fact that the stars of The Station Agent were all guests of The Visitor's premiere despite the fact that none of them appear in it, but regardless of that, it also means he tends to get great performances from them. Richard Jenkins is generally good value in all his (often minor) roles but here he's superb in his portrayal of Walter. He doesn't like his job and he doesn't like his life, it just takes a while before he admits it to himself. His new-found friendship with Tarek is almost like a wake-up call, an opportunity to be the person he actually wants to be for a change. As odd as it may look to see a 60-year old white guy enthusiastically pounding an African drum, he thoroughly convinces throughout and was duly nominated for an Oscar for his efforts.

Portraying Tarek and Zainab, the couple befriended by Walter, are relative newcomers, Haaz Sleiman and Danai Gurira. Zainab spends her days selling ethnic jewellery in a market but remains wary of Walter. The happy-go-lucky Tarek, on the other hand, is charismatic (this film's Joe Oramas to Walter's Fin) and the unlikely duo of he and Walter form an enjoyable friendship which is quickly put to the test. After Tarek's arrest his screentime is more limited and his lively nature is sorely missed, but when his mother, Mouna, arrives wondering why she hasn't heard from him, it's replaced by the new friendship that she and Walter form as they anxiously try to organise his release.

So, is Tom McCarthy's second film as good as The Station Agent? Well, yes and no. They do have a few similarities and, while his first film is more re-watchable in my opinion, this film touches on matters of greater importance, especially in recent years. In the wrong hands, this could've been a melodramatic mess but McCarthy's restrained direction makes it a highly entertaining look at post-9/11 attitudes to immigration in the US which, thanks to the great performances as well, makes it uplifting and thought-provoking. After all, to quote the film's other tagline - "In a world of six billion people, it only takes one to change your life..."