Poor old Bomb Jack. After an exceptional mid-80's debut his future looked bright and he could've been one of the very first platform heroes but despite a couple of sequels, he instead faded into obscurity. One of the sequels, Mighty Bomb Jack, appeared only a couple of years after the original and took the addictive bomb-collecting, enemy-avoiding gameplay and introduced scrolling stages as well as numerous bonus collectibles. A year after that, Elite offered their own unofficial sequel, creatively titled Bomb Jack 2, which strangely took away Jack's power of flight, instead requiring him to leap from platforms to adjacent platforms. The next game in the series was also sadly the last to date and it was... Bomb Jack Twin. 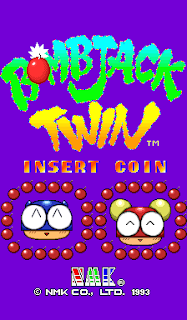 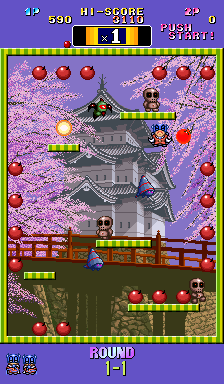 Appearing some six years after Elite's franchise-destroying game, Bomb Jack Twin took the gameplay back to the basics, but made one vital addition - a two player mode. Yes, that's right - joining in with Bomb Jack's bomb-collecting tomfoolery this time is a female Bomb-collector (Bomb Jill?) and together they must once again save the world's landmarks and cities from... actually, did we ever find out who was responsible? Anyway, the stages here are basically polished-up copies of those found in the first game with one exception - they're a lot harder! It appears, therefore, that rather than merely offering the option of a two-player, this game is designed to be played that way.

The reason it's harder, you see, is because the enemies are both much more numerous, and much faster. Just look at the screenshots below - both were taken by me a few seconds after the start of the stage and there's already six or more enemies on the loose! The longer you last, the more of them there will be and some of them chase you around the screen at a ridiculous speed. The first stage eases you in a little but after that you'll need the reflexes of a gazelle to get very far on your own and the 'P' icon becomes more vital than ever before! 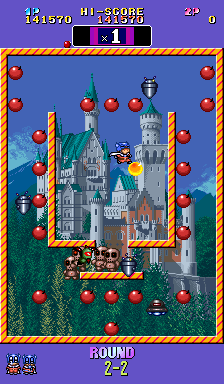 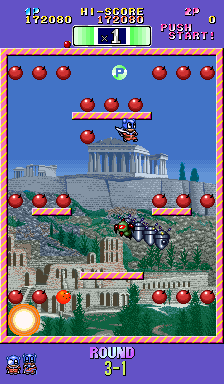 As you can probably see, one of the biggest changes the series has seen from first game to this one is the graphics. It's been nine years since the first Bomb Jack so this game looks much fancier with its beautifully drawn sprites, some nice animation, and nice backdrops. Some of the music and sound effects return from the first game (in remixed form, of course) but they are joined by some new ones too, and everything is top-notch presentation-wise. But does the pretty new look make it a better game?

Stages are set in thirteen locations around the world and before play begins you'll see a map screen showing where you are. After three rounds, then a bonus round (same sort of objective but with no enemies and a tighter time limit), you'll move to the next dot on the map, and control over Jack (and Jill) through the game is again extremely tight and precise which is more necessary than ever here! Obviously this game is the best in the series for enjoying with a friend since it's the only entry in the series with such an option, and fantastic (if often short-lived) fun it is too, but when 'flying solo' I think I'd have to go for the original. If you've got the necessary skills, Twin is a superb game, but it'll just prove too tough for most single-players. 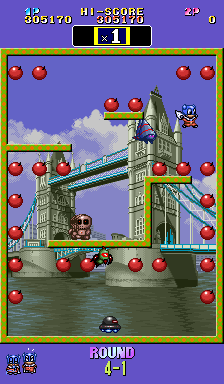 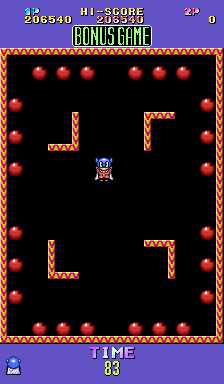