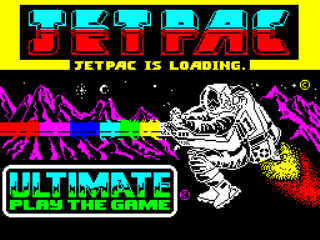 Most gamers who grew up in the UK around the same sort of time I did (you know, the 80's 'glory days'), probably had one of the 8-bit micros that were doing the rounds at that time and for me it was the ZX Spectrum. I got into gaming late though, and missed the Speccy's early years which also meant I ended up missing most of the games released by the now legendary Ultimate and, to my eternal shame, I've never got around to playing them since either. This is once again where good old Red Parsley comes in handy for me as it provides a great excuse (not that one should be needed, admittedly) to rectify this glaring oversight! To that end, this series of features will look at all of the games released by Ultimate and I guess it makes most sense to start with the first game!

Developed by Tim and Chris Stamper, the founders of Ultimate, Jetpac is a simple game as you might expect, and it stars Jetman. It's your job to guide him around the single-screen stages to reassemble his rocket and then refuel it by collecting the fuel pods that fall onto the screen one by one. On most stages after this he'll just need to refuel it but every now and then there will be a new rocket to reassemble and he'll have to repeat the whole process from scratch. Jetman can fly using the titular device for indefinite periods and is also armed with a laser to take out the endless swarms of aliens that drift across the screen attempting to stop him from half-inching their resources (such as precious metals and gems), which also drop onto the screen periodically and can be collected for bonus points. The stages are also looped meaning if he flies off the left of the screen he'll emerge on the right and vice-versa. This is useful for evading aliens but can also be risky as the aliens do the same!

Each stage is home to a different kind of alien (until they eventually start repeating) and they are the source of the game's difficulty. Each type of alien moves in a different way and your ability to deal with them will determine how far you can get. For example, I have most trouble with the ones that look like gonks but others may find them a breeze. I think most players would agree that this is still a pretty tricky game though, regardless of which types of alien cause you problems! The sound is predictably almost non-existent and the graphics are also fairly basic, and suffer from a bit of colour-clash for good measure, but at least they are colourful, and they're nicely detailed too. Jetpac has never been a flashy, show-off game anyway though, even I know that - it's famous for its gameplay and nothing else and after just my first few seconds playing it I could see why. It may be simple but it's also extremely well-crafted. As is often the case, this combination makes it a very addictive game, and one that I'm pleased to have finally played!