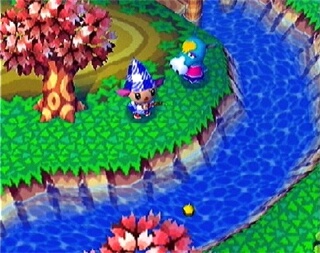 Actually, this time it's not strictly a first look as I've already played this game quite a bit, but I've never 'taken the plunge', so to speak, and bought it myself. As some will know, I grew up as a Sega fanboy and much of my console gaming has been done on their systems, but an old friend of mine is the same except with Nintendo. He's the sort that buys every incarnation of GameBoy and DS the day they come out and plays every release of every Nintendo IP to completion, etc, and out of all of them the one he is most obssessed with is... Animal Crossing! After he showed it to me a few times I started to see why too - it must be the most chilled out game ever! I guess I'd have to categorise it as an RPG but it's more of a 'life simulation' really, and is quite unlike anything I've played before! 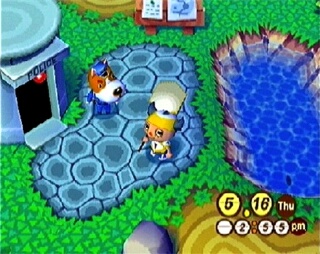 The game, if you can call it that, sees you as a new resident in a rural town which is populated by anthropomorphic animals. You can make friends with them, send and receive gifts, decorate and furnish your house, get a job, take part in contests, and all sorts of other things. You can even collect and play NES games! There really is so many details to the game and a lot of what happens in it depends on what you do or how you act. It all happens in real-time too, with all the characters going through their daily routines whether you play it or not. Indeed, if you spend any time away from it, they'll all be asking where you've been when you come back! The characters are brilliant too, with each taking on their own personality. Perhaps the best and most well known is KK Slider who is a musical dog who puts on shows for you! Even special occasions are celebrated here and the game sticks to the real seasons as well. I guess it says a lot about my taste in games that I prefer this to Shenmue, which is not only a celebrated Sega franchise, but is also essentially the same sort of thing, only with a far more dramatic story. To be honest, I've been scared to buy this game, I'm sure I'd become addicted to its strangely captivating world and its unique inhabitants but I think I'll give in soon!