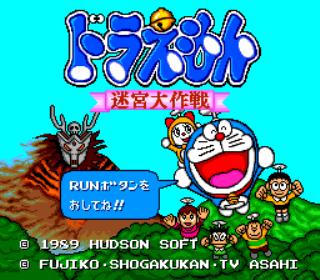 Having recently introduced some Red Parsley readers to the wonder that is Doraemon (a post met with overwhelming indifference it seems!), I thought it might be timely to feature a game based on his antics. In fact, there are currently over 50 videogames based on or featuring everyone's favourite robotic cat, but this is one of the few to make it out of Japan. Well, kind of. For there was once a rather obscure arcade game called 'Kid no Hore Hore Daisakusen', better know in the West as 'Booby Kids' (snigger) which received an NES port. It was later also ported to the PC Engine (or rather a game based on it was released) but the sprites and theme of the game were altered to incorporate Doraemon and friends, naturally, given their popularity in their native realm. However, this version was then released on the TurboGrafx-16, but since most Americans don't know who Doraemon is, all the original graphics were put back into the game and it was released as 'Cratermaze'! This review, however, will focus on the Doraemon version of the game. Because I like him.

Not everyone likes Doraemon though it seems. There he was, happily flying along on his magic carpet device with his friends when an evil spirit turns up and kidnaps all of them except Doraemon himself! It's now clearly up to the splendid blue moggy to rescue all his friends. This is done by guiding him around the many overhead viewed, scrolling mazes in each of which you must collect sixteen... well, they look like pies or something, but I imagine they are dorayaki, Doraemon's favourite food! After they're all collected a key will appear which unlocks the exit to that round. Of course, the rounds are also inhabited by various peculiar beasties which pootle around the mazes seemingly aimlessly, and all of them cause Doraemon to lose a life if one of them touches him. Fortunately there are a few things that make his task a little easier to shoulder.

In order to deal with the horrific beasts prowling each round, Doraemon is capable of digging holes in which he can trap them. Once this happens, another press of the same button sees the hole filled in, thereby cruelly ending the life of the enemy in question. For each of them you kill you'll receive bonus points at the end of the round but, beyond potentially getting you out of a tight spot, that's about all killing them does. They will immediately respawn nearby and are pretty much just there to get in the way and prevent you from... umm, collecting all the dorayaki's! Helpfully, one of the several power-ups available doubles the number of holes Doraemon digs at once so you can dispose of the enemies from a greater distance, but be careful - on the higher of the two difficulty settings he can fall into the holes himself!

There are sixty rounds in all, each one being several screens in size and of course littered with various power-ups too. There's speed-up boots which, like the one already mentioned, last indefinitely, but there are some more with rather more limited time-spans including a clock which freezes all the monsters, a spray which slows them all down, an invincibility shield, a bubble-gun which traps and kills any enemies that you shoot, something which turns the level blue and all of the enemies into ice, and perhaps best of all - bombs! These are used Bomberman-stylee, killing any enemy in their blast range (well, this game is by Hudson Soft!). Other items found now and then include teleporters (which, like Gauntlet, send you to the nearest similar device) and spring pads (which can just as often be a pain as they are helpful!).

Doraemon Labyrinth, as it's sometimes called by Westerners, is a curious game. There's definitely nothing spectacular about it but at the same time everything here is pleasant enough with one exception - it's far too easy. The graphics and sound certainly don't push the Engine to its limits but they do their jobs well. The stages and sprites aren't particularly varied but everything is neat and well-drawn, with the titular metallic feline looking great. The music too, which for the most part will be familiar to fans of the anime, is pretty good as well, which just makes it more of a shame that Hudson didn't think to increase the difficulty to any noticeable degree. To be honest, I got bored of playing after 30 minutes or so, having not even come close to losing a life, but I strongly suspect that if you were so inclined you could play through this entire game in your first sitting, even on the higher of the two difficulty settings!

That's the most (or only!) frustrating thing about this game - it's genuinely enjoyable to play for a short while and features some nicely designed stages - but the absence of any kind of challenge offers little incentive for prolonged play. Hudson Soft are generally purveyors of some top-notch games, especially on the Engine (such as the splendid Bomberman series which this game plays a little like), so I can only assume this title is either aimed exclusively at young children, or is a rare slip up.