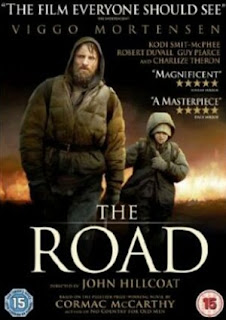 Tagline: "In a moment the world changed forever"

Let's face it - as a race, we Humans are pretty stupid. For all our marvellous inventions and innovations, we still have all the violent and aggressive instincts inherited from our less-evolved relatives down through the ages and it's only a matter of time before we end up destroying ourselves. A good few film-makers have had this notion before and the results have been mixed - for every Terminator or Mad Max there's been a Steel Dawn or The Postman, but this latest effort comes from a very highly-regarded source. Adapted from Cormac McCarthy's Pulitzer-prize winning novel of the same name, The Road is another post-apocalyptic drama, but rather than featuring wars or heroic deeds, this film is simply about a man and a boy and their struggle to stay alive. 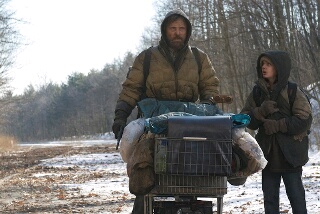 Indeed, the cause of the devastation is never explained although it certainly doesn't take us long to see what sort of state the world is now in. Some sort of natural disaster is a possible cause but it's more likely the world's idiotic leaders engaged in some sort of thermo-nuclear exchange, for the world inhabited by the unnamed Man (Mortensen) and Boy (Smit-McPhee) is a bleak, desolate, and grey one, largely without any hint of redemption. We see glimpses of Man's past life via flashbacks, both shortly before and shortly after the 'event' which wiped out much of the life and all of the civilisation on the planet, but a vast majority of the film follows Man's efforts to lead his son down the road of the title to presumed safety at the coast. 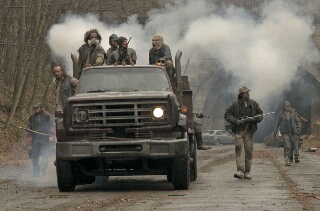 Despite being devoid of animal or useful plant life for the most part, however, the world isn't completely deserted. During their travels, in between foraging in deserted buildings for food or anything useful, they do occasionally encounter other people. Some are in a similar situation to them but others have more sinister intentions, including, of course, armed gangs looking to take food, possessions, even people by force. Being forced to live almost every moment in, at best cautious fear and at worst terror and despair, is something that's hard to even imagine, but seeing the world through the eyes of Man and Boy, you can understand why his wife gave in a long time ago, and that's testament to the amazing job by the filmmakers. There are plenty of cameos to be found here (an almost unrecognisable Robert Duvall is particularly good) but understandably dominating the screen time are the characters of Man and Boy, so they needed to be portrayed by top actors. 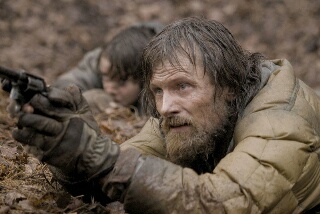 As most of us will know already, Viggo Mortensen is a consistently fantastic actor, and one who takes his roles very seriously, so it's no surprise to find here that he is thoroughly convincing as Man who, while resourceful and intelligent, also struggles desperately to raise his son in completely unthinkable circumstances. Young Kodi Smit-McPhee, too, exudes both innocence and naivety as the vulnerable Boy, but also seems wise beyond his years at times as well. This isn't a film for the 'graphics tarts' - near enough the entire film is shot in gloomy shades of grey and brown, but the way the bleak landscape has been captured does a superb job of conveying the desperate plight faced by the protagonists. Buildings crumble, trees gradually topple, as the world gives up trying to support us and fades into nothing. The film does paint a terrifyingly convincing picture of what life really could be like in such circumstances. It's hardly a feel-good film and it's not too re-watchable either, but it's so well made, and acted and packed with emotion, you'll be hooked while it lasts.