For anyone who grew up with an intense interest in gaming there were of course always some systems they liked and some they didn't like, but I'm willing to bet there was also one which they were always intrigued by, one they wanted but probably never even got to see nevermind own. A system that seemed to take on an almost mythical aura of wonder and excitement. For me that system was the PC Engine SuperGrafx. 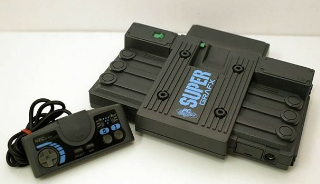 The original PC Engine was an amazing machine itself, like the Holy Grail to a videogame-obsessed teenager like myself. All the hype and excitement surrounding it in the pages of magazines like C&VG built it up and up - even my dad was impressed with it! But then reports started surfacing of a new, more powerful PC Engine. What could possibly be better than the amazing Engine? Well, as many of you may well know by now, it was not well received and few games were ever released for it, but even in spite of that it retained its mysterious and enticing aura in my mind and it has remained ever since. Until, that is, I attended the Replay gaming expo in Blackpool where I was excited to see this very console nestled menacingly between a standard Engine and and a NEC PC-FX. Finally I had been granted the opportunity to use a real SuperGrafx in the flesh (so to speak) and I seized it!

Whatever faults the SuperGrafx might've had, it's always sad to see a console flop as dramatically as this one did and sadly, as a consequence of this, there were only ever five dedicated games released for the system, with a further two that worked on both the standard Engine as well as the SuperGrafx, benefiting from improved graphics on the latter. Here I'll take a look at all five of the dedicated titles released for it: 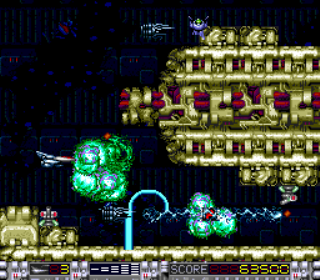 Amusingly sub-titled 'The Mission Code for Rage Crisis', this is one of just three all-original games made specifically for the new system and to be honest, I can't decide if it's the best or the worst of them! It's a pretty traditional side-viewed shmup set over various alien landscapes and through space with you in command of a small but formidable space fighter. There are of course numerous power-ups to be found including speed-ups and various fairly unoriginal but effective weapons, but there are also drone-type devices which seem to have a bit more sentience than most as they home in on and zap the enemies for you! It's a good idea in theory but they do make the game rather easy (except the bosses - eek!). The graphics are pretty nice though - their style reminded me of an Amiga game to start with but there is some nice backgrounds and bosses and the music is good too. Aldynes is a decent horizontal-scroller but there's better examples on the standard Engine. 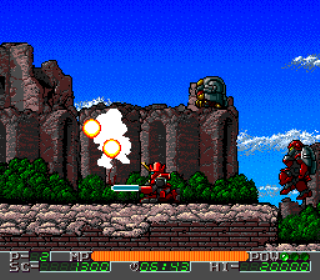 Out of all the SG games, this is the one I knew least about prior to this feature and my instant first impressions of it weren't too good. Predictably based on an anime series, Granzort itself is a giant robot warrior fighting to rid the world of invading monsters which, in the case of this game, results in a side-viewed run 'n' gun adventure. Granzort looked and moved a bit clunkily to start with, but after I'd played this for just a short while I soon realised it's actually pretty sweet! As Granzort the player can switch between three different robot configurations, each with its own attacks which are more effective against certain enemies than others. The music is catchy and the graphics are really nice too, particularly the backgrounds. I'm pleasantly surprised to find that Granzort is a top-notch platform/combat game and I'll definitely be playing this some more. 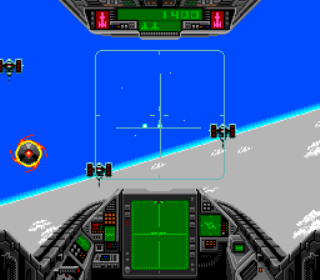 This was the first SuperGrafx game I played (at Replay) and I was initially rather deflated. It certainly didn't strike me as demonstrating a significant leap in graphical abilities but after playing it a for a while I started to rather enjoy it. It's essentially a first-person take on After Burner and requires little further explanation beyond its slightly more futuristic setting. Your craft is equipped with cannons and heat-seeking missiles with which you must take out the many enemies that advance from the horizon. The music here is largely forgettable and the graphics aren't particularly impressive, with somewhat sparse backgrounds and uninspiring sprites, but there are some nice weather effects and the chosen perspective allows for the inclusion of a useful HUD which helps make this a fairly enjoyable, if unoriginal into-the-screen shmup. Probably not as good as After Burner on the standard Engine though! 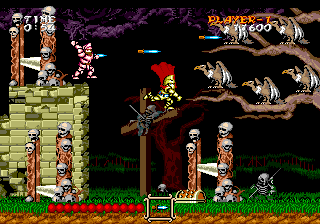 This was the SuperGrafx game the magazines mostly used screenshots of to tantalise us readers with and I can see why - it's a cracking conversion of Capcom's arcade classic. As most (old) gamers will already know, it's a hard-as-nails platform shooter which sees you, as Sir Arthur the knight, battling hordes of undead creatures across many creepy locations in an effort to save his lover from the evil clutches of Lucifer. Frequently compared to the fantastic MegaDrive version, this SuperGrafx port very nearly succeeds in eclipsing it which, when you consider it's still technically running on an 8-bit machine, is an amazing achievement! This is a superb port of a superb game and is every bit as playable as the best versions around. 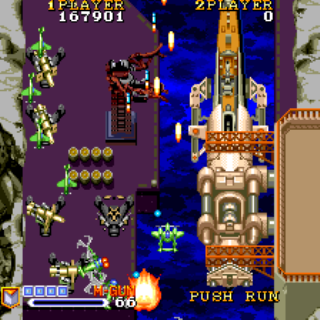 Yep, it's another shoot 'em up! This time a conversion of the arcade game of the same name and latest in the 194x series of WWII-set vertical-scrollers from Capcom. Surprisingly this port for the SuperGrafx is the only official conversion the game received which is surprising given its quality. As you might expect, the game sees you taking on the entire enemy military single-handedly, this time using a P-38 Lightning fighter aircraft. You start with a pretty feeble forward-firing cannon and three 'loops' (smart bombs) but numerous power-ups are of course forthcoming. It's a fast-paced game, with enemies zooming around all over the place and appearing from all sides of the screen so it's pretty tough going in single player mode, especially considering how small many of the sprites are. Luckily there's a nice two-player mode which helps. A hard but good shmup which ably demonstrates the SuperGrafx's sprite-handling abilities!

Verdict:
And there we have it - the entire back catalogue of the SuperGrafx! To be honest it's hard to know what NEC were thinking when they decided to go ahead with this machine. The PC Engine was a big success in Japan, a moderate success in the US (which is good considering how little they promoted it), and highly sought after in Europe (where they stupidly never released it), and the Engine CD-ROM was going pretty well too, featuring many games that wouldn't be possible on a standard Engine so, to a mere mortal like me, it would've seemed like a better idea to concentrate on that machine.

Admittedly, NEC's vision was more grandiose to start with though. The SuperGrafx was originally intended to be a full 16-bit system dubbed the 'PC Engine 2' but somewhere along the line something happened and NEC got cold feet, scaled down their plans for the new machine, and released it earlier than expected as the SuperGrafx. Hardware improvements over the standard PC Engine ended up being negligible with the new system using the same CPU as its predecessor, benefiting only from additional RAM and a couple of extra chips.

I'd love to interview the heads of NEC around this time to find out exactly what they were hoping for with the SuperGrafx. Its games are all good and do look nice for the most part but there's better examples of each of them on a standard Engine. The most baffling thing for me though is NEC's decision to make the SuperGrafx another HuCard-based system. While it does allow the console to be backwards-compatible with Engine games, I can't work out for the life of me why they didn't make it a CD-based system, especially considering the Engine CD-ROM was well established by this point.

So, it wasn't a success, and deservedly so to be honest. It had very few improvements over the popular PC Engine which already had hundreds of games available (not to mention a CD-ROM), and it had perhaps the smallest number of dedicated games of any console ever. It seems hard to see the console as anything other than a lesson by NEC in how to squander success and money, but in spite of this and everything else, I still can't help but be entranced by it! Just look at it - has there ever been a cooler or meaner-looking console?
Posted by RetroKingSimon at 17:17