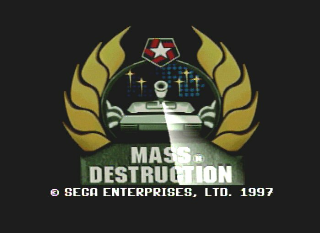 The poor old Saturn had a bit of a torrid time in the UK and US but it met a little more success in Japan and it's the titles released only there that have made the system something of a collector's favourite. Among the most prestigious and desirable of the sexy system's Japanese exclusives are the large number of amazing 2D shmups it was blessed with, most of which could not be fittingly represented on any other machine of their time (and yes, that includes the PlayStation - hee hee!). So, for the first game of this new Red Parsley feature focusing on the shmups released for Sega's 2D powerhouse, I'll very sensibly start with... one that has 3D graphics and was released in all major territories around the world!

Worldwide release or not though, Mass Destruction has never been a game that has garnered much attention and it's my mission to change that! Taking its cue from the multi-player, flag-capturing frolics of Return Fire, NMS's game ditches the multi-player mode and adds a loose mission-structure instead, plus a story has been tacked-on too (although little mention is made of it in the game's instruction book) which revolves around your attempts to bring down a 'fanatical tyrant' and his army known as 'The Republican Army'. This involves a series of free-roaming missions, viewed from an angled overhead perspective where your objective, as you may have guessed from the title, is to destroy everything!

Actually, that's not strictly true. You do get mission targets which must be razed, but what I probably should've said was you can destroy anything, and let's face it... most of us will! Yes, enemy tanks and missile launchers, all manner of buildings from houses up to skyscrapers, even trees - absolutely anything can be shot and blown up here! Regardless of whether you stick to your mission targets or go on a free-for-all, however, you're going to need some serious hardware. Your permanent means of offence, and indeed defence, throughout the game is your tank and you get a choice of three, each with obligatory 'scary' names - the 'Viper' (average speed and armour), the 'Cobra' (slow but strong armour), and the 'Cheetah' (fast but weak armour). Near the start of the game, any of these can be used effectively, but in later missions you'll need to choose more carefully - some missions will suit one tank much more than either of others.

One area that the tanks are the same, though, is in their weaponry. Each has a rotating turret and comes with a cannon and chain gun as standard, both of which have unlimited ammunition, but the other weapons only become available when you pick them up. Sometimes they'll appear in the ruins of destroyed buildings or installations and other times they can simply be found lying around, but once you've obtained them you'll have access to some much meaner and more destructive firepower. There are six others available including hi-explosive shells, mines, mortars, a flame-thrower, guided missiles and the Vortex Bomb (a smart bomb), but all have limited ammunition. Only the chain gun, mortars, or guided missiles can be used for destroying aerial targets, but the others are more than adequate to handle everything else the RA can throw at you.

Once you've chosen a tank it's time to get destroying! Your next choice is which mission you want to tackle first. There are five rows of 'folders' on the mission select screen (which presumably contain your orders) and you can initially select the first from any of these rows. Once you've chosen, a mission briefing will follow outlining your primary and secondary targets. If you forget them, there's a radar in the bottom-left of the screen during play that will show you what's nearby or you can access a map that will show the entire level including the location of all targets. Once you've finished a mission you must find the 'extraction zone' which is marked on the map, although to finish a mission 'properly' you must also find and destroy the bonus mission targets which aren't mentioned anywhere (except probably some internet cheat sites).

Each mission is set over one of four different landscapes - Arctic, Desert, Suburban, and Rural. Each of these is obviously different in appearance, but more importantly each is home to some unique features. Arctic missions, for example, are the only places you'll find nuclear reactors or airports, and Suburban missions are where tower blocks, communication sites, and military bases/camps are exclusively found. It's not as simple as trundling in and shooting up everything, though. Each area is populated by numerous enemy vehicles (mostly other tanks) and soldiers who fire rockets and throw mortars, and their key installations are even more heavily defended as you might expect, with such armour-piercing monstrosities as rapid-fire anti-tank rocket launcher batteries. All of this pummelling does take its toll on your tank too. Each of them starts the game with a thousand armour points but luckily there are Red Cross crates dotted about here and there, one of which replenishes a hundred armour points and the other less common one replenishes five hundred.

And that's pretty much it! It's not a complicated game and despite its free-roaming nature Mass Destruction is very much a shoot 'em up, albeit one with a bit more depth than most. Most of the stages here are pretty sizable and there's also a good few secrets to uncover in them but the biggest lure of playing this game is the immense satisfaction it gives! This is of course helped by the splendid graphics and sound. There's some nice variety between the landscapes and each is home to its own features. There's some nice water effects too, and the sprites are pretty decent, but it's those amazing pyrotechnics that'll impress the most. As mentioned before, practically everything in the game can be shot and blown up, and when you do, things explode in spectacular showers of sparks and flame, and they can even be blown up twice!

The music is also top-notch with a selection of electronic dance-style tracks that can be selected, or if left alone the game will cycle through them, and the sound effects are even better, particularly the agonizing screams of the soldiers if you shoot them, set them on fire, or run them over, and all the shooting and explosions are nice and bassy too. There are a few things that could've made this game even better such as a two-player mode, different vehicles (like Return Fire), a more in-depth mission structure, etc, but as it stands it's still a superbly enjoyable game. The enemy AI is good (soldiers hide from you or run away if you go after them, for example) and control over the tank is flawless. All in all this game may not be very well known but in my opinion you could do a lot worse than give it a bash. It looks and sounds nice, is amazingly good fun, but above all that - who doesn't enjoy blowing shit up?!