Having now had my first taste of the much-loved Commodore 64 (I was going to say 'recently' but it's actually an alarmingly long time since the first post - here), I figured it was time to revisit it and try a few more games. Like the first post, the games featured here were all available elsewhere but were probably most famous as C64 games, especially a certain few, but unlike last time I'm somewhat more familiar with these games, having played them or similar games elsewhere, which should actually prove better for familiarising me with the C64's abilities. One thing to note is that, as you may have noticed, all the games selected are arcade-style games. I thought this would be okay since I'm just seeing what the C64 is like as a system and I don't really have time to learn the intricacies of some of the great strategy and adventure games the system offers such as The Sentinel, Forbidden Forest, Citadel, etc, but I certainly intend to play them eventually, at which time I'm sure you'll hear about it here! For now though, here's my first impressions of these games: 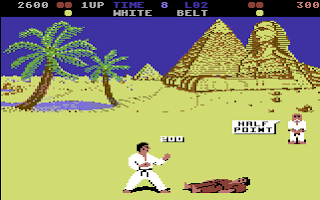 I've long been a fan of the supreme IK+ on the Amiga but I must admit I've never played this prequel before. As far as 8-bit micro's are concerned I was always an 'Exploding Fist' fan but if the time I've now spent on this is anything to go by, I've been missing out! IK+ is great fun but is pretty fast-paced, even manic at times, with its three simultaneous combatants. IK is a little more sedate. Since it's just one-on-one contests, you're afforded more time to try to out-fox your opponent and score a knockdown. I greatly enjoyed this one with its finely-honed gameplay, good selection of moves, and nice, varied backgrounds, and it will definitely see more play! 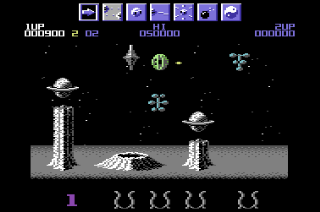 It was at R3Play when I was reminded of this game, while watching the great Jon Hare doing his presentation. He asked who had played Wizball (his first big hit) so I enthusiastically raised my hand! Then he asked who had played the 'proper' version on the C64. I had to sheepishly lower my hand, but I vowed that I would play it, and soon! I used to own the Speccy version and I didn't really have a blinking clue what I was doing, but I also later bought it for the Amiga and enjoyed it much more there, actually making a little progress (just a little though!). Having now played this original version, I'm... a little disappointed to be honest! I've been hearing C64 fans raving about this game for so many years, I was expecting to be bowled over. I was expecting all my indifference towards the game to disappear as it became instantly clear why the game was so revered. But that never happened. The graphics are quite nice and I found it very addictive, but I also found it tough and frustrating too, and the sound is awful. I did quite enjoy playing it, and it's a game that it's satisfying to do well at so I'll keep trying, but not this version I'm afraid. I'll go back to the Amiga version I think, sorry C64 fans! 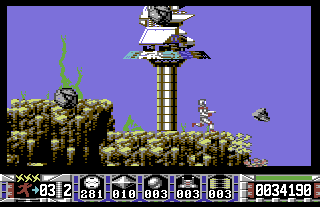 This is another one I've played elsewhere (kind of), specifically Mega Turrican for the MegaDrive, but it is again a game best known on, and originally developed for the C64, and I must say... it's impressive stuff! Turrican was perhaps initially noticed for its admittedly superb aesthetics but, as I soon discovered, even this first version of the first game is far from a one-trick-pony - the superb graphics and music merely complement the top-notch game design rather than cover its flaws. Although seemingly influenced by Metroid on the NES, Turrican is much more focused on action, specifically shooting, but of course even I knew that much already! There's a lot of blasting to do here though, with several weapon power-ups available to increase the range and power of hand-held gun (or 'arm-cannon'), and with a large number of varied enemies to mow down as you clamber around the large, multi-tiered stages, there's certainly a lot to hold your attention. I've played a good few 'run n gunners' over the years, and I greatly enjoyed the MD version of Turrican, so I'm pleased to find that this original version is just as much fun to play. Now to have a look at the sequel! 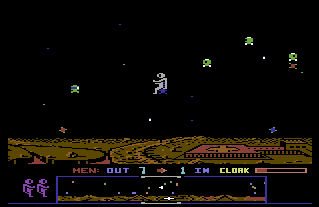 Considering I'm supposedly an Archer MacLean fan, it's rather embarrassing to confess here that I have never previously played this game! I am a big fan of Datastorm on the Amiga though, and finally playing Dropzone reveals the Amiga game to be far more like Archer's classic than Defender, of which it is supposedly a clone. So, not only was it quickly familiar to me but I also soon saw why it's so loved (unlike my time with Wizball!). It took me a few moments to work out where I was supposed to be dropping off the pods but I was soon blasting away fairly convincingly. Having said that, Datastorm is no walk in the park and this game is even harder! The pods are seemingly abducted by the Landers (sorry, they're called 'Planters' here) every few seconds so the priority is to rescue them very quickly it seems. After that it's a manic shooting gallery as you attempt to take out all the evil alien ships. This really is a superb shmup, probably the best I've played on any 8-bit micro, and has some great little touches, especially those fantastic firework-like explosions. A superb title I would've undoubtedly spent a lot of time on if I had a C64. 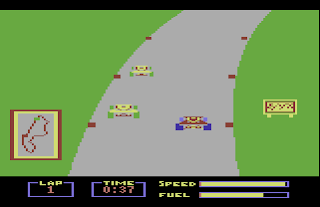 Now I don't like to be unkind to a system which I'm pretty much just using as a guest at this point, but whoever suggested I give this one a try must've surely been taking the piss! I'm firmly of the opinion that into-the-screen racing games are a genre that the earlier systems couldn't really do justice to, and this is a very early example, but c'mon! This Epyx release reminded me one of those handheld LCD games where you move the car at the bottom of the display left or right across three lanes to avoid the infinite slower cars that also occupy them. Those devices are okay for what they are but I would expect a lot more from a C64 (or indeed a Speccy) F1-style game! The graphics and sound here are dire and the gameplay gets annoyingly repetitive after just a few minutes of play. Maybe the sequel is better but I can only assume I've been the victim of a joke with this game!

Verdict:
Well, it took me more than 20 years but I've now finally played some games on this iconic system, and it's a little tough to summarise my experience. To use a football analogy, it's like supporting Liverpool for all these years, then trying to see what it would've been like to be a Manchester United fan the whole time (the CPC would be like Scunthorpe or something of course - hee hee!). Sure I could enjoy watching the United team play but would my heart really be in it?

I certainly can't deny that the C64 is a competent machine though, with some outstanding games, and is almost certainly more technically gifted than the Speccy - despite having far blockier graphics, the extra colours do make a difference and the famed SID sound chip makes a huge difference - the Speccy's audio 'abilities' are hard to defend, even as a Speccy fan! I'm a big fan of videogame music so I imagine listening to old SID music must be an enormously nostalgic experience for gamers who grew up with a C64 and that's something I certainly missed out on.

The experience of being a C64 owner must've been pretty similar to that of being a Speccy owner - the machines are fundamentally very similar of course - but I reckon I would've had a great time as the former. Perhaps they are suited to different types of games befitting their particular specialities but I've greatly enjoyed discovering these great C64 games regardless. That said, I'll always have more affection for the Speccy, that will never change (it is best, after all!), but I am no longer a stranger to the ways of the C64!

Exploring the Commodore 64 - Part 1
Posted by RetroKingSimon at 16:48