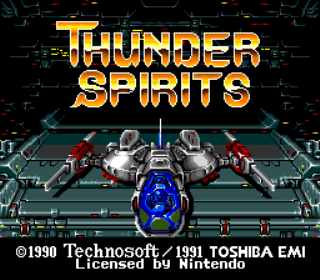 Wherever you stand in the whole MegaDrive vs SNES war, if you're level-headed and of sound mind, you can't possibly think that either system wipes the floor with the other. I was and remain a huge MegaDrive fan - 'Sega 4 Life' and all that - but I can humbly acknowledge that the SNES is still a pretty awesome console with some fantastic games. It's true that Sega's machine is better for some genres, while Nintendo's is better for others, but one area I always thought they were pretty close was shoot 'em ups. Both systems have some great examples of this technically-demanding genre but there are surprisingly few that appear on both machines so a direct comparison is not often possible. One notable example, however, did eventually appear on both systems. It was a much revered game on the MegaDrive whose name was, and still is, uttered with the utmost reverence. It has once again undergone a name change but it's still a game whose name begins with 'Thunder'... 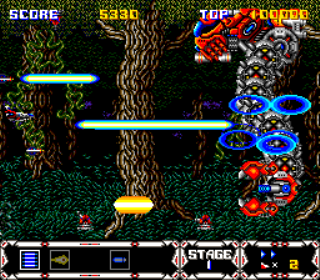 It was known on the MD as Thunder Force 3, of course, and was considered by many to be the jewel in its shmup crown. It was also, for a short while, exclusive to Sega's 16-bit powerhouse until its immense popularity gave Techno Soft the idea of re-releasing it in the arcades. This they did, albeit with a few changes, as Thunder Force AC, and this SNES game is a direct conversion of that rather than the MD game. I've already covered the original game fairly extensively here (as have a million other sites!), so I'll instead see how Toshiba have gotten on with the conversion. The SNES has a good few tricks up its sleeve but can it equal, or even better, the masterpiece found on the MegaDrive? Well, despite what I'm sure was their best efforts, it seems this mighty shmup was either beyond them, or beyond the abilities of the SNES itself. 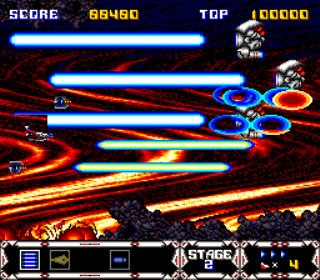 As mentioned, Spirits is a conversion of AC so it features the two stages from that which replaced the underground caverns of Haides and the frozen world of Ellis found in TF3. Aside from that, everything should be more or less as it was on the MD. Unfortunately, it's not. In screenshots, everything will look very familiar and indeed, the backdrops, sprites, weapons, etc, are all faithfully reproduced for the most part, but there are a few small discrepancies. There are fewer colours used and some of the secret weapons are missing, for example. The formerly great music and sound effects also now hurt my ears. The biggest problem, though - pretty much the only real problem in fact - is the surprising presence of some awful slow-down. If your ship is fully tooled-up, just shooting your weapons can cause a significant problem, nevermind when the screen is also filled with sprites or moving objects. Does it mean the SNES is a less capable platform? That's not really for me to say, but besting the MegaDrive game was always going to be a tall order in any case, and this effort has sadly fallen short. It's still a great game, and it's far from unplayable, but it also tarnishes what was for me a near-flawless shoot 'em up.