Some of my Top Five lists here at Red Parsley are very difficult to compile due to the high number of candidates worthy of inclusion. This particular Top Five, however, has proven to be the trickiest yet, but for a different reason.

As most of you will probably know, the Saturn was a 2D powerhouse but most developers struggled to create decent 3D graphics on it. Many tried though, which has resulted in a lot of mediocre racing games, amongst other genres, meaning I actually had trouble finding five games good enough to include here! Lesson learned - play more Saturn racing games - there must be five really good ones, surely? 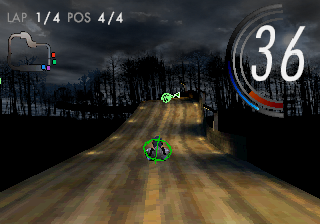 One of many futuristic racings games to appear in the late 90's, Scorcher is a real rarity - a Saturn-exclusive game from a third-party developer (okay, there was a PC version too, but that doesn't count)! It didn't really set the world alight though and it's quite easy to see why. The graphics aren't bad from a technical point of view but are largely dark, gloomy, and not terribly eye-catching - about the only bright colours are the green glowy energy-cage things that encircle your space-bike. The controls take a lot of getting used to as well, but stick with it and it turns out to be a challenging but pretty enjoyable futuristic racer. The decent techno/trance soundtrack is noteworthy as well. 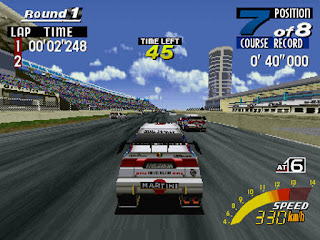 Sega Saturn Magazine hyped this game beyond belief leading up to its release. When it finally arrived, however, the magazine staff found themselves rather underwhelmed. Since playing the game myself, I'd say they were a little harsh. The main problem here lies with the handling of the cars, which is admittedly a little iffy, but it's far from an unplayable mess. The music is horrifyingly bad too (it's of the pop/dance style that Sega were so keen on around this time) but the graphics are particularly impressive - there's a good sensation of speed and the cars look fantastic. This is nearly ruined by the choppy framerate which lets the side down a bit, but it's possible to have some enjoyable and exciting races here. 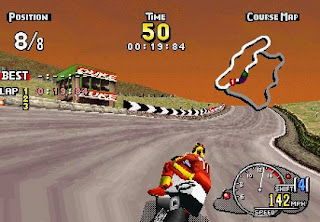 Another conversion of a Sega coin-op and it's a pretty accurate one. Based loosely on the Isle of Man TT race, it only features a mere one-and-a-half courses, but they're nicely-designed ones with undulating surfaces and some lovely countryside-ish landscapes. Manx TT also offers the option of a first-person viewpoint which increases the excitement and sensation of speed ten-fold! The soundtrack is good too, although I'll offer a cash prize for anyone who can tell me what that commentator is going on about (joking)! The handling here is a little sensitive and the small number of courses is disappointing, but this is still definitely one of the Saturn's better racing games. 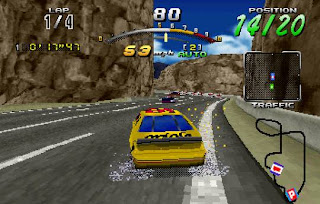 The big question here was whether to go for the original release or this souped-up version. As I'm sure you've gathered, I went for the latter version but it was a tough call. Which version better represents the immense arcade behemoth? As far as the car-handling is concerned, the original edges it, but CCE features much-improved graphics, a decent two-player mode, two extra courses, lots more cars, extra music tracks, and various new play modes including my favourite - the endurance race! I've actually spent a lot more time playing this than any other Saturn racing game, but I suppose I have to begrudgingly admit that number one should go to... 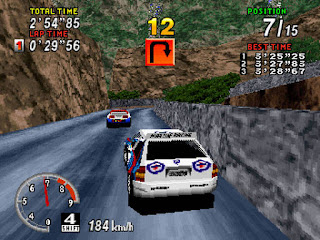 Yep, the classic Sega Rally! A revelation on its release and hailed as a saviour for the already-fading fortunes of Sega's 32-bit wonder. Far more faithful to the arcade game than anyone thought possible, this was the first 'killer app' for the Saturn, and remained one throughout the lifetime of the console. The graphics are smooth and virtually devoid of pop-up but the real reason for its greatness is the handling which is close to perfect, allowing for extremely precise driving. It would've helped if it had more courses, but it was still a great reason to be a Saturn owner. I generally prefer GT-type racing games to rally ones but even I had to concede that this one is damn good.


Okay, I'll admit it - as much as I love the Saturn, it's pretty sucky for racing games. This is one area where the PlayStation destroys Sega's console, and considering how popular the genre was at the time, it's probably a big part of the reason the Saturn didn't perform too impressively. Oh well... :(
Posted by RetroKingSimon at 19:58