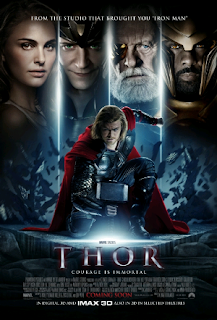 Marvel have got a hell of a lot of characters they can potentially promote to the silver screen but as they work their way through the roster, the characters will inevitably be more and more obscure. For example, how many non-comic fans knew anything about Thor before this film appeared? That's not to suggest that they will be any less entertaining, of course. It could even work in their favour. Fans and non-fans alike are bound to have certain amount of expectation of a Spider-Man or Hulk film, for instance. Thor is more of an unknown quantity, and on top of that - he's a God! The journey into his fantastical world is one that has near-infinite possibilities, and sure enough, we are first introduced to the character around 965 A.D. when he is a mere child, the first son of Odin.

It transpires here that the mighty Nordic Gods of old are in fact immortal beings from the Kingdom of Asgard who were, at that time, engaged in a war with the Frost Giants of Jotunheim, and their leader, Laufey (Feore), who are eventually defeated and weakened by the seizure of their power source, the Casket of Ancient Winters. In the present day, Thor (Hemsworth) is preparing to succeed his father (Hopkins) as King of Asgard when the proceedings are interrupted by a Frost Giant attack. Enraged, Thor, acting against the wishes of his father, leads his brother, Loki (Hiddleston), and friends, Sif (Alexander), Volstagg (Stevenson), Fandral (Dallas), and Hogun (Asano), to Jutenheim with the intention of ending the Frost Giant threat once and for all.

After Thor and his buddies return to Asgard, an angry Odin brands his son arrogant, immature, and irresponsible, and banishes him to Earth, stripped of his powers and separated from Mjolnir, his hammer and source of his power. Here, he's soon discovered by scientists, Dr. Selvig (Skargaard), Jane (Portman), and her assistant, Darcy (Dennings), who are fascinated by his strange arrival and behaviour, finding his every word and action rather strange. Of course, it isn't long before some more sinister types take an interest in them as well, and in particular, Mjolnir, which lies in the New Mexico desert, an area now swarming with SHIELD operatives including the slimy Agent Coulson (Gregg).

These films must be a wet dream for the comic-book fans! After two Iron Man films, The Incredible Hulk, and the forthcoming Captain America, Marvel are building up steam for the big one - The Avengers, coming in 2012. The other films all featured well-known actors in the leading roles so it's a little surprising to find Marvel have opted for a near unknown here. After impressing with very limited screentime in the most recent Star Trek film though, Chris Hemsworth could hardly have seemed the biggest risk. He certainly looks the part too, after piling on pounds of muscle for the role, and after proving more than adept at action, comedy, and romance-alike, emerges from the role a real star. The other standout performance is from Ms Portman. Amidala aside, it really does seem hard not to fall in love with her, no matter which character she's playing! It's also impossible not to mention the amazing special effects, from the glittering and majestic Asgard, to the dark and gloomy Jutenheim, it's all atmospheric and of fantastic quality.

As appealing as this and the other Marvel films must be for the fans, for those not already familiar with these characters, the premise behind Thor must seem laughable on paper. Indeed, it could've easily been very camp and unintentionally amusing, but fortunately the unexpected choice of Kenneth Branagh as director has proved to be a good one. The superb action scenes, mostly taking place off-Earth, are spectacular and befitting the stature of the participants, while the Earth-bound scenes, where the majority of the romance and humour take place, the latter mostly involving the mortal Thor's fish-out-of-water experiences, are just as enjoyable in another way. I was left with a nagging feeling at the end that not a whole lot had actually been achieved beyond a sibling spat, but it's damn entertaining while it lasts! The best Marvel film yet? A very close second behind Iron Man for me, but I'm off to watch it again to make sure!