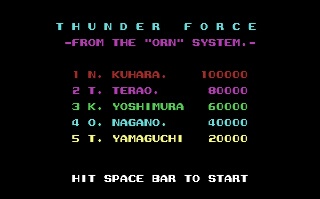 During the course of my long struggle to finally see and play the original Thunder Force game for the PC-88, I saw some screenshots of the PC-98 version, which appeared to have fancier graphics, so I decided it might be a good idea to include that version in this feature too. I soon regretted it, of course. This turned out to be even harder to get to play than the the PC-88 version! However, after a long and arduous struggle, fraught with many problems, and once again with the help of some splendid fellows from the Retro Gamer forum, I managed to get it running. 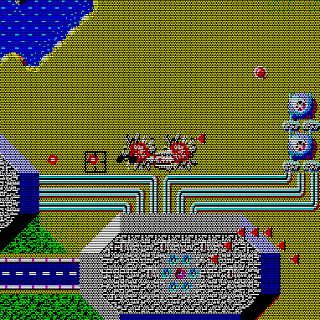 For some reason, the emulator I used to run this game won't work on my desktop PC, but will work on my laptop. This in itself caused a problem. The emulator, you see, uses the numeric keypad for in-game control, and my laptop obviously lacks one of these. I therefore had to try and play by pressing the 'Fn' key as well as the other keys the emulator uses for in-game control. This proved diificult. With perseverance, however, I was able to play the game to a reasonable degree. Degree enough to determine that this version of the game is at least as insanely difficult as the PC-88 version, perhaps even more so! Everything seems to be the same, such as the level layout, and the sound is identical (i.e. near enough non-existent!), but the graphics, as initially suspected, are indeed quite a bit nicer. Definition is more or less the same, but many more colours are used here. 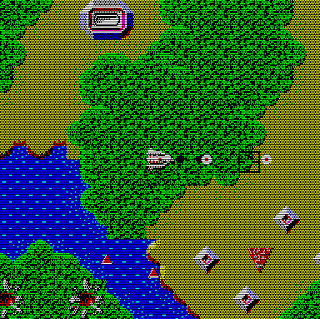 And that's pretty much it really. Aside from the graphics, the two versions are more or less the same. It's still really, really difficult, but is still playable and addictive too. The PC-98 must use a pretty interesting graphics chip though. The screenshots I managed to get of this game do not like to be resized or saved in any format other than png or they go all funny, so, as this blog automatically resizes pictures, the shots posted here don't look quite as nice as they should. Overall, I've been really happy to finally see what the original Thunder Force game is like, I just wish it was easier to emulate and play (the option of using a control pad would be nice, for example!). If at a later date, I'm able to have a more comprehensive look at this game, I'll definitely do so, but for now...