You know, when I decided to write this feature and ask for some recommendations, I immediately thought any NES fan I spoke to would say Super Mario something, Zelda, Mega Man something, Metroid, etc, etc. The only game I ended up playing that I actually expected to have recommended to me was Contra, but thanks to my Facebook friend and NES fanatic, Eric, I've now had a varied taster of NES-related tomfoolery anyway. However, since the console has such a huge number of games I thought it would be a good idea to ask someone else to recommend some more. Enter my fellow blog-writing friend, Sean (see his fantastic blog here), who had some suggestions even more obscure than Eric's! Here's how I got on with them: 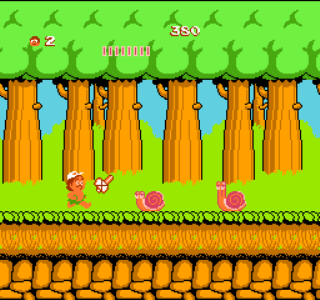 The Wonder Boy / Adventure Island games have a very convoluted lineage and indeed, I've actually already spent a fair bit of time playing this game, albeit under its 'correct' name on my Master System! It's been interesting to see another version of it though, and a direct comparison between a game on the two systems should help with my evaluation of the NES. This version certainly doesn't look as nice, but let's face it - the Wonder Boy sprite has never been very appealing, and this isn't really the flashiest game on any format either! The music is as catchy as ever though, and the game plays just as well as I remember, which is very well. It's a very simple game, requiring you to do little more than press 'right' and hit a button every now and then, but it's great fun and very addictive. I'd probably return to the MS version to be honest but both versions play as well as each other. 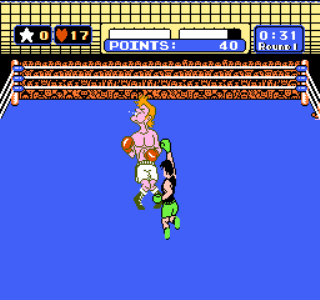 This is one of those games that I've seen screenshots of in magazines many times over the years but never played... until now! Given my lack of interest in the real sport, I've never really played any boxing games - not even Rocky on the Master System - and I didn't really expect this one to be much cop to be honest, but it's not bad! I found it pretty easy to pick up and play but was a little disappointed that I couldn't choose a character to play as. The default boxer has a limited repertoire of moves but it's still pretty good fun smacking up the amusing-looking opponents, and executing an uppercut is particularly satisfying! I don't know why stupid Mario is sticking his nose into the proceedings though. I still haven't spend a huge amount of time on Punch Out!! but it looks like being an enjoyable, if somewhat repetitive diversion from the usual platformers and shmups. 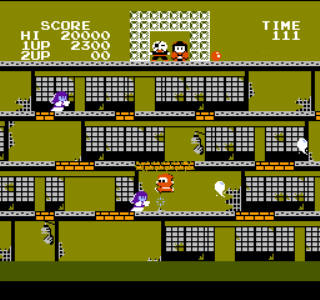 I don't think many gamers could blame me for having never heard of this one, it's probably a somewhat obscure release even for NES owners! It initially reminded me of a number of similarly early MS platformers but this one already has an advantage - everyone know ninjas are awesome and they are abundant in this quirky game! It's a spin-off of another NES game I've not heard or - Ninja Kid - and stars his younger brother who has been charged with rescuing Princess Sakura. This involves making his way through a series of stages, each of which has four floors and eight enemies which must be defeated before he can move on to the next. It's a very simple, no-frills game which I think I can safely say doesn't push the NES to its limits, but it's enormous fun and is one of those games where practise really does pay off, allowing for some lengthy and satisfying sessions. 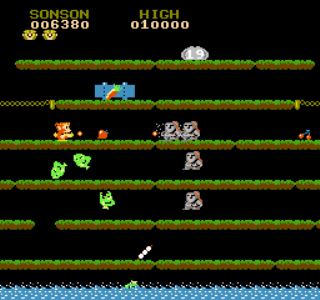 One of my favourite PC Engine games is SonSon II but I must admit, I've never played this original. It doesn't appear that it was released in Europe so I guess that's why but it seems like a fun little game. It takes the form of a side-viewed, multi-tiered platformer starring a monkey-like boy called SonSon who must traverse the auto-scrolling stages battling evil creatures with his magic staff. It's all pretty basic stuff, especially the graphics, but it's understandable given the age of the game which must've been among the first games released for the Famicom. The music is catchy and appealing though, and the game is fast-paced and addictive and offers a two-player game too. SonSon is a pretty decent game but it also shows me what a departure Capcom took with the sequel which is more akin to an arcade adventure. 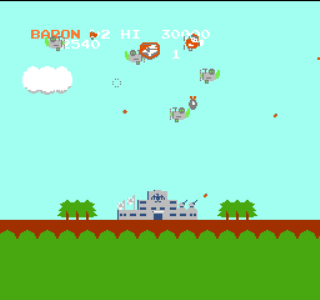 Yet another one I've never heard of! This early Namco release is a rather curious one too being a somewhat cartoony take on a WWI shoot 'em up! I didn't know what I was doing to start with but I soon learned that I had to actually direct my little (and hard-to-spot, initially) plane sprite to take off! Once airborne, you'll fly to the left for a change where you can take out enemy planes and ground targets with your puny little pea-shooter gun but the main object of a stage is to bomb a specific mission target. The bomb must first be picked up too, so keep your eyes open for it - I didn't even notice it the first couple of times! As well as being a game I didn't know about, Sky Kids is also another one featuring rather basic presentation but I guess all that tells me is what I already know - games don't need to be flashy to be enjoyable!

Verdict:
As long as it took me to finally get around to giving the NES a 'test drive', I suppose I've always known I'd enjoy many of its games and that's definitely proved to be the case. Every console has at least some good games though so arguments often descend to comparisons of tech-specs. Indeed, my own pro-Master System arguments often used to focus on the supposed technical superiority of Sega's machine and many of the games I've played for this feature are indeed less impressive to look at than similar examples on the MS. While the NES uses a similar resolution, it also has a less appealing pallette in my opinion (although that could be nostalgia talking) with its sprites often looking less crisp, and I'm pretty sure Sean wasn't trying to showcase the graphical abilities of his favourite console with his choice of games for me to try out, but I suppose that may well have been the whole point!

The trump card for the NES has always been its extensive back-catalogue though and I can imagine that proving very useful if I'd had one in my youth. There's literally something for everyone amongst the 1000-odd titles released during its long life, and many great examples of all the popular genres. That was probably my biggest problem as a Master System owner - if I wanted, for example, a vertical-scrolling shoot 'em up, I only had about five options whereas NES owners probably had about fifty to choose from! Then again, just as it was the case more recently with the PlayStation, the sheer number of titles available from software houses of varying reliability inevitably meant that NES owners had a lot of crap to sift through before they could find all the gems! There certainly are gems though - I've been introduced to some while writing this feature and I don't doubt that there's many more which remain unknown to me.

As great as the NES certainly is though, the fact remains that I didn't have one, so I don't share the immense sense of nostalgic and sentimental affection for the console as thousands of its previous owners understandably do. My trusty MS remains the console I have most affection for and I'll never forget my favourite games for it, but I'm very glad to have finally had a taster of 'The Enemy' too.

Special Note: A BIG thanks to Eric and Sean for their help and recommendations for this piece, and indeed further NES-related gaming. Cheers! :)