With the help of my NES-loving friends, Eric and Sean, I have now had a good taster of a wide variety of games for their favourite console. In the process, however, I also received numerous other recommendations from others. So despite the fact that the 'Exploring the NES' feature is now technically concluded, I figured I might as well take a look at the games recommended by others too! These five are the favourites of a splendid fellow you may know as Stiggy (check out his great blog here)... 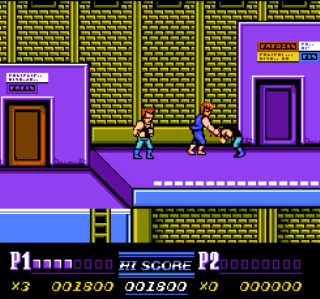 The entirety of my Double Dragon gaming has so far been done on the Master System's great but flickery port of the original arcade game so I was very interested to see how the sequel fared on the MS's great rival. To my dismay, it's even better! Although differing substantially from its arcade parent, the objective in this version remains the same which sees the Lee Brothers on a mission of revenge after their shared beyatch was killed by the wretched Black Warriors gang. Oh well, at least the game is great fun to play! The music is superb while the graphics, using the distinctive NES colour pallette, are are also great and feature far less flicker than they would on the MS. I was particularly impressed with the stage design which is creative for a game of this type. The first stage, for example, see you climbing up progressively higher rooftops of buildings via ladders until you meet the boss on the top floor! On first impressions, a superb fighting game that I'll definitely return to. 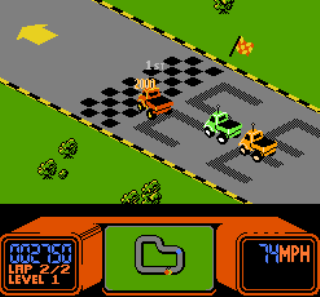 I've known for many years how popular this Rare release is but I had to settle for the rather mediocre RC Grand Prix on my MS. Is its reputation deserved? After my first few minutes playing it, I decided it was! Its distinctive graphics are very appealing and the sound isn't bad (except the tyre-screeching noise which soon grates) but games like this are made or broken by their handling. Happily, it's the former here - nipping around the surprisingly numerous courses is great fun with your little radio-controlled trucks and they have quite a few features packed into them too including power-ups for your vehicle (including weapons!). The lack of a multi-player option is mystifying but this is a highly entertaining little game which I would've spent a lot of time on in my youth. Perhaps I still will! 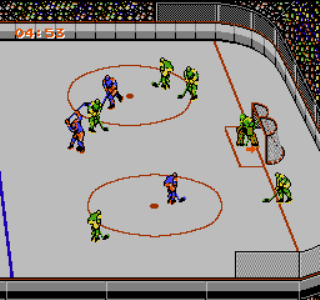 Up until now the extent of my ice-hockey gaming has been with EA's titles on the MegaDrive (remember when EA were good?). There were a couple on the MS which I never got around to playing but I wonder if they were as good as this one? The graphics here aren't especially inspiring and the sound is rather poor with especially awful speech (although you have to commend the attempt), but I picked things up quicker than I expected. The controls in sports games like this are usually a bit complicated but here, within ten seconds of starting I'd won my first fight and scored my first goal! I still ended up losing to my stupid Canadian opponents (who looked like a team of zombies), but I enjoyed the attempt anyway! Not as enjoyable as the NHL games on the MD, although I suppose that's a bit of an unfair comparison, but it's still an entertaining game which I'm sure is ever better when played with a friend. 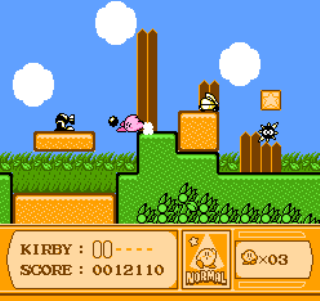 These cute, happy platformers are a guilty pleasure of mine but I must admit, I've never played a Kirby game before. Actually, I did have a quick bash at Kirby's Epic Yarn at the R3Play Expo if that counts, but that's all. Kirby's Adventure was one of his first games though, and it's a pleasant if unremarkable affair. Kirby himself is an endearing fellow though and has a decent amount of 'actions' including inflating himself so he can float around. Actually, I wonder if you could just float across the top of a stage without having to face any of the enemies? I'll have to try that later! It'd be a bit of a waste though, I suppose. The stages are fairly typical Mario-style ones from what I saw and are nicely presented with colourful graphics, appealing sprites, and some great music. I doubt it's a Psycho Fox-beater but I look forward to exploring Kirby's happy world further. 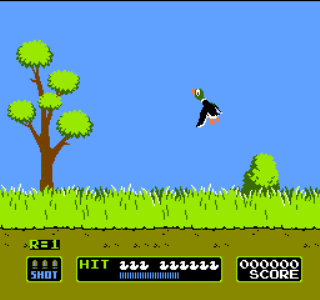 Hmmm, I'm guessing Stiggy wasn't suggesting I play this one without actually buying an NES but I gave it a go anyway. But alas, my slim hopes that it could be played with a control pad soon disappeared. Still, I did watch it play by itself for a little while and it doesn't look as good as Safari Hunt. Sega's offering includes a greater variety of poor, innocent creatures to blast away at, as well as three different scenarios, but I suppose considering that it was almost certainly a clone of Duck Hunt to start with I'm not sure it counts! I'm sure it was a great laugh though, and remains so today. That stupid dog better
watch himself though...