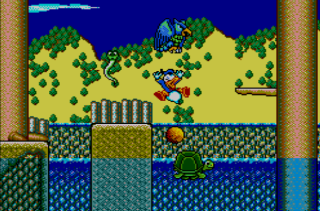 During my time as a Game Gear owner, this was probably my favourite game and having now spent some time playing the MS version I'm happy to see that it's pretty much identical. Starring you as Donald Duck who's charged with rescuing Huey, Dewey, and Louie as well as retrieving Uncle Scrooge's titular lucky dime, it's a pretty standard platformer but that shouldn't suggest it's not a good one. You can choose which nephew to rescue first, each of whom is being held in a different exotic location around the world of course, each of which is populated by various terrible creatures. It's a very enjoyable adventure though, filled with memorable moments and topped off with fantastic graphics and music. 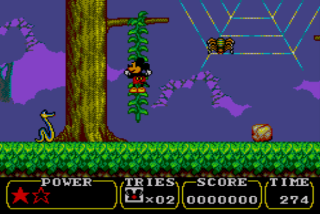 Platformers featuring Disney characters may have been popularised by the numerous top-quality releases on the MegaDrive but owners of Sega's 16-bit monster didn't get all the fun! This rather late MS release did get missed by a lot of gamers who'd already moved onto the unbridled power of the MegaDrive though, but they missed out on a top platformer! It's the sequel to the also-splendid Castle of Illusion and sees Mickey trying to recover a magic crystal stolen by an evil phantom or some such guff but that doesn't really matter too much. What does matter is that it's a creative, charming, and highly enjoyable game with superb graphics, music, and lots of entertaining stages. Arguably the best 'Illusion' game. 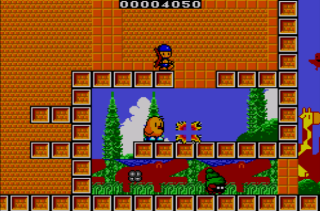 I generally try not to include arcade conversions in these lists unless it's a particularly awesome effort, but this port of Taito's classic definitely qualifies! Although it has its detractors, New Zealand Story has always been a top-notch cutesy platformer as far as I'm concerned and this version is amazingly faithful, surpassing the 16-bit home computer versions and even throwing down the gauntlet to the PC Engine and MegaDrive versions! All the splendid gameplay remains intact here but just look at those graphics! It's only the sprite-flicker and slightly inferior sound quality that stop this from being arcade-perfect! Still a fantastic game and among the best-looking games on the humble MS! 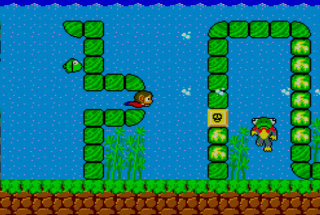 A fairly early MS release and easily the oldest game on this list, the splendour of Alex Kidd's most celebrated adventure hasn't been diminshed by age and is still one of the best platformers on Sega's trusty box of tricks. It can't just be me that thinks so either - the game came built in to the Master System II! I hadn't even played the game properly until a recent Red Parsley feature but I could immediately see why the game is so revered - it's a pretty challenging adventure but it's also great fun to play through, providing numerous treats and surprises througout its duration such as its vehicular diversions and aquatic tomfoolery. Great music, tidy, colourful graphics, and precise controls complement the addictive and balanced gameplay. 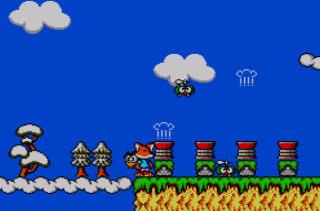 Unlike Alex Kidd's most popular game, Psycho Fox is one I've been familiar with since it was first released. At the time I had never experienced a game featuring multiple characters that you could switch between, nor a platform game with multiple routes through a stage, so it at least had my attention right away. It's not one of those games with some great ideas but an enjoyment-destroying flaw either - the endearing characters have unique abilities and control over them is about as good as you could ask. The graphics and music are superb and the stages are large, numerous, and varied too, and home to lots of creative and original features - they're an absolute joy to play though and thanks to their size and multiple routes, you can enjoy the game time and time again. Still one of my top-three favourite Master System games of any genre.