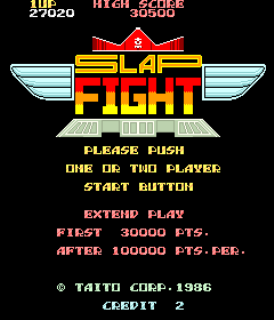 You could at first be forgiven for thinking that this early Toaplan release was a fighting game or perhaps something rather more bizarre, given its rather strange name, but it's actually an almost totally un-weird game! As I'm sure most of you now know, Slap Fight is actually a shoot 'em up, much like most of Toaplan's releases. This one is a fairly standard vertical-scroller set in 2059 which of course charges you with saving Humanity. It's not Earth this time though but a colony in another galaxy which has come under attack from those pesky aliens. As an 'Allied League of Cosmic Nations' pilot, it's your job to fly the catchily-named SW475 star fighter and take down the advancing fleets of alien attackers. 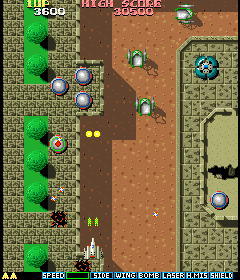 If we, as a species, somehow acquire the knowledge and/or skills to not only get to another galaxy but establish a colony there as well, all in less than 50 years, I'll be mightily impressed! Realistic story or not though, saving this colony is your task, and it's a tough one. The two most interesting things about Slap Fight is that it features no airborne enemies and that it has no stages. The game is instead divided into a hundred 'areas' but there's no way to know which you're in as progress through the game is without break - until you run out of lives that is! After you've cleared the hundredth area, the game loops back to the beginning which makes this a great game for high-score fans! 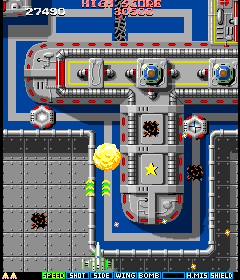 The alien forces you're up against are all ground-based and include moving tank-like craft and stationary gun-emplacements too and both seem quite happy to pump lots of bullets your way, and to begin with your attack craft is almost too slow to avoid them. It's armed with a reasonable, medium-range forward shot which is adequate to take out most enemies and some of them leave behind a yellow power-up star. There are eight upgrades your ship can be equipped with and they are acquired Gradius-style by collecting the stars - the more stars you collect, the better the power-up you can choose. At either end of the scale are essential speed-ups and a rather handy shield. 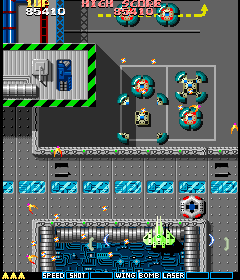 It's also possible to upgrade your shots to bombs (more powerful but shorter range), lasers (more powerful and longer range), or homing missiles. Each replaces your standard shot but can be accompanied by the side-shot and/or upgraded by adding power wings. These make your ship larger but also increase its firepower by some margin. They are just as easily damaged as the main ship though and will break off if hit. If your ship itself is hit, it will be destroyed and you'll lose all power-ups collected! Eeek! It's a tough game too. A hyper-skilled gamer would be able to play it from start to finish (and back to start again) in around fifteen minutes but it'll likely last most (normal) gamers a lot longer than that. 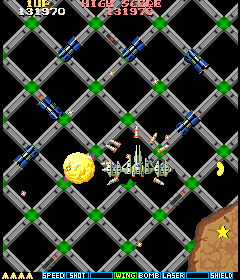 The giant single stage that comprises the game is pretty good-looking though. It presumably takes place over the colony you're struggling to protect which has apparently already been inundated with evil aliens. Your ship moves over it painfully slowly to start with but once you've nabbed a few stars to speed it up the going gets a bit easier. With the exception of the larger bosses you'll encounter every now and then, the enemies themselves aren't very large and don't vary much throughout the game, either in their appearance or movement, but they all pump out endless supplies of small, fast-moving bullets in your direction so your dodging skills will have to be at peak efficiency here! 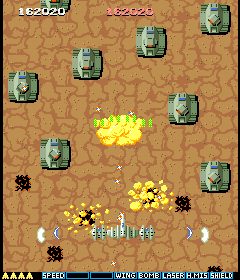 The landscape itself isn't particularly varied either. Much of it takes place over metallic, industrial-type areas packed with gun-emplacements but there are also areas that look like courtyards with pathways and small grassed areas with trees, and there's a curious desert-like region too. It's all nicely detailed though and the frenetic action is accompanied by a pretty decent soundtrack, but you may be too busy trying to evade the hails of bullets to really notice too much! Most of the enemies actually shoot at you and none of the weapons are so devastating that you'll destroy everything as soon as it scrolls onto the screen. Apart from the homing missiles none of them travel the whole length of the screen either, so you're always on the move. Which is good, of course. Yes, the game is pretty tough going but there's not really any particular parts that you'll get stuck on so you should gradually ease your way further into the game. Most of the conversions of Slap Fight are good too, but of particular note is the superb (and notoriously expensive) MegaDrive version which, as well as featuring a spot-on port of the arcade game, also includes a whole new game as well! This original has aged very well though and is still a great shooter. It's really enjoyable to play and is very addictive too - definitely a 'one more go' game! It's pretty basic, which is understandable considering its age, but it looks and sounds nice and has enough distinguishing features to stand out from the crowd.