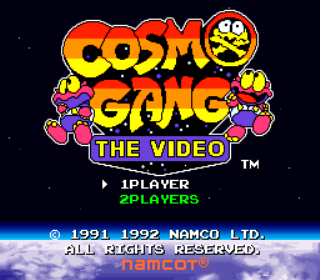 I think it's fair to say the first true smash-hit videogame that took over the world was Space Invaders. Its simple style and addictive gameplay has been copied and improved by many designers and companies over the years but my favourite of these has always been Galaga, specifically Galaga '88 for the PC Engine. However, that could be about to change. My appreciation of cute, crazy Japanese games is well known and here Namco have given their own classic series of Space Invaders-style games a cute 'n' crazy makeover! The basic premise behind Cosmo Gang varies little from that of Galaga as you might expect. It replaces the evil alien insects from Galaga with strange characters called Cosmo Gangers and the predictably simple objective of the game is to clear each stage of these peculiar creatures before they can clobber you!

In typical fashion you control a tiny little ship at the bottom of the screen which you must guide through all the stages unscathed. There are five worlds, each with five stages before you'll face the final stage which has three parts and ends with a fight against the evil boss, Don Cosmo. Each stage starts with an empty screen but almost immediately the Cosmo Gangers begin swooping onto it in formation before settling into position. After this, individuals will frequently break formation to attack before resuming their former position... if they survive! This may all sound familiar to Galaga fans and indeed, it's exactly what the terrible insects do in that game, but Cosmo Gang does have a few ways of distinguishing itself. Most noticeable are the graphics which don't really bear much of a similarity to Namco's previous game, but Cosmo Gang also features some pretty interesting power-ups too.

Although equipped with a basic shot which is perfectly adequate to start with, your yellow ship soon starts finding itself getting a bit swamped. It's therefore a good idea to seek out some of the collectible icons that some Cosmo Gangers carry. As well as 'P' icons for extra points, they include a fairly normal shield and mines, a slightly weird web, which spans much of the screen and slows the enemies down, and a whirlwind thing, which spins the enemies off the screen, but there's also a hilarious, not to mention rather obscure Jack-in-the-Box which scares all the enemies stiff, thereby freezing them for a short while! More useful than all of these, however, is a cannon upgrade which is carried by the Cosmo Ganger patrolling the top of the screen. Once collected, this bolts a big cannon to either side of your ship which makes a huge difference to the speed and efficiency of your Cosmo Ganger extermination!

In keeping with it's heritage, Cosmo Gang also features a 'Challenging Stage' between each world. This one sees Cosmo Gangers trying to steal blocks from you by pulling them up the screen. If you manage to repel their attempts for the required period of time you'll receive a bonus from a Wheel of Fortune style device. Perhaps the most notable addition this game has received over Galaga however, is the inclusion of a simultaneous two-player mode, and a superb one it is too. Not only does it make things a little easier, but if your friend's ship is destroyed you can nab his power-ups too! At first you might be forgiven for thinking that this is a rather easy game. Indeed, to start with, nary an enemy shot heads your way but that doesn't remain the case for long. It is during their frequent bombing runs that the Gangers are most dangerous as not only is this when a majority of their shots are fired but also because they may crash into you themselves. Some of the later ones even shoot big lasers at you or breath fire! As you advance through the game, enemy movements and bullet speeds both increase steadily and you'll need pretty fast reflexes to reach Don Cosmo and prevail once and for all!

For all its quirky little features though, Cosmo Gang is very much a Galaga game, much like Parodius is to Gradius - it looks and sounds nothing like the game it's based on but plays in a very similar way. The graphics here are ultra-appealing too (well, unless you don't like the whole cutesy look). I'm not sure what sort of creatures the Cosmo Gangers are but they are amusing and full of character but the gorgeous backgrounds are what impress the most here. Each is either a planetary landscape or space scene but all of them look fantastic and part of the urge to keep playing is to see what the next one will look like. The music and sound effects are suitably strange and upbeat too. I can imagine some won't like the style but I like it a lot and it suits the game perfectly. The Gangers often make strange noises, do funny little dances, there's some speech (in Japanese of course) - there's so many little touches that make this is a very humorous and enjoyable game. Like the MegaDrive, the SNES plays host to a huge stack of shmups. Many are technically better than this, most have more depth, but I'm not sure I can think of a single one that's more addictive or, quite simply, more fun!