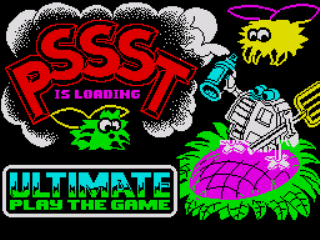 As one of the most popular and fondly-remembered early Spectrum games, Jetpac was a huge success for the Stamper Brothers and it didn't take them long to follow it up. Released later that same year, Pssst was a game that had a similar premise but its setting couldn't be much more different. The aim of both games is to shoot interlopers in order to protect a valued but stationary object, but whereas before it was your spaceman's rocket ship your efforts were concentrated on, this time it's... a flower! It's not just any flower though, but a prize Thyrgodian Megga Chrisanthodil, and its proud owner is Robbie the Robot! In order for this special plant to be nurtured into full bloom, you must help Robbie fend off the hordes of evil Interstellar Space Slugs, Scuttling Leeches, and Menacing Midges who want to eat it! 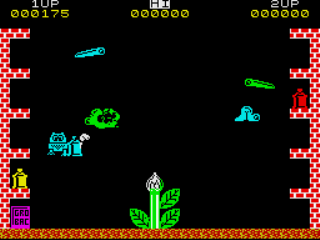 Much like Jetpac, the action here is presented on identical, single-screen stages. This time, however, there are small platforms along the left and right sides and a small flower shoot at the bottom. Robbie can be moved freely around the screen which starts filling with bugs almost immediately. These are dealt with by picking up one of the cans of insect repellent found on the small platforms and spraying them. There are three different cans and each is more effective against a certain kind of bug, and bags of compost also appear periodically which should be collected to speed plant growth. If you allow bugs to munch on the plant too much it will wilt and die and it's game over, but if you can keep it free of bugs for long enough it will may even blossom and reveal Robbie's ultimate dream! 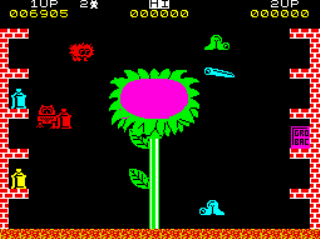 Pssst and Jetpac are pretty similar games to play. They both basically involve moving around the screen zapping enemies and collecting the odd item here and there, but despite the similarities their difference in setting does make each very enjoyable in its own right. The sound is pretty minimal once again with just a few effects while the graphics, which are of a similar style to Jetpac's, feature the same colour-clash but are nice and colourful and the bugs are nicely animated. It's great to see the plant gradually growing higher and getting more leaves - if you can nurture it to full bloom, it's a sight to behold! So, while the first two Ultimate games have both proved to be great fun and superbly playable, I think I marginally prefer this one. It's a bit easier than Jetpac, and at least as addictive, but what other game charges you with growing a flower?!