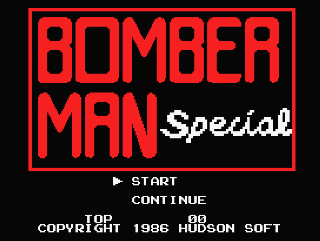 After the horror of my previous look at the Bomberman series (and a mentally-scarring first use of an MSX), I approached this next installment with great trepidation. Admittedly, the main reason for this is that it's once again hosted by the MSX. However, much to my relief it seems that Hudson have mercifully abandoned the brief foray the series took into the third dimension with this release. It was again exclusive to the multi-company micro but this game is much more akin to the first NES game of the series which was the first time many Westerners got a glimpse of the character we now know and love. Despite my reservations however, I couldn't help but be intrigued (and a little scared) by that 'Special' in the title. 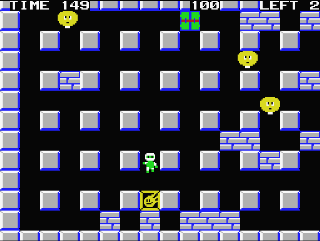 The first thing that struck me about this game was the rather strange way in which Mr Bomberman runs. Granted, the cute and endearing, not to mention nicely-animated character(s) we know today had yet to reach fruition but why is this guy so jittery? He runs very slowly too, at least until you manage to find a speed-up or two, and looks like he should be more nimble judging by his animations. Anyway, slightly odd movement aside, it didn't take me long to realise that this game is near enough identical to the NES version released the year before, and without the conspicuous 'Special' in its title too. After the travesty of 3-D Bomberman though, such similarities are a blessing and there are many of them here. In fact, just about the only major difference between this game and the NES release is the one the eagle-eyed among you have probably already noticed - the graphics. 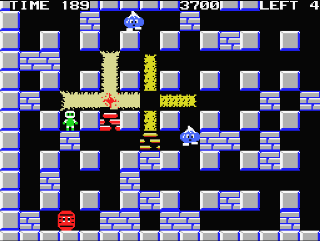 I'm not yet familiar enough with the MSX to know if this game is good looking for that system but it doesn't look as good as the NES game. Gone are the distinctive green backgrounds, replaced by a soulless black void, the enemy sprites are blockier and less detailed, the larger-than-one-screen mazes scroll horribly (it's actually more flick-screen than scrolling), and the explosions are far less impressive too, looking more similar to those in Eric and the Floaters on the Speccy, but these are more or less the only things that have changed. Both games play pretty much the same, fundamentally (once you've got a speed-up here), but control over our hero is somewhat more sluggish here. It's pretty good fun though which, considering the unbridled horror of the last Bomberman game on this system, is more than welcome! It was an MSX exclusive though, and due to this, the game did little more to bring the series to the attention of American and European games where the system was barely known of. That would have to wait until the next title in the series which also introduced something that would soon go on to define the series...