Special Disclaimer: In case anyone says anything - yes I know Retro Gamer magazine has just done a isometric games feature but I've actually been planning this post for a while, I didn't copy them (despite the opposite seemingly happening now and then!) 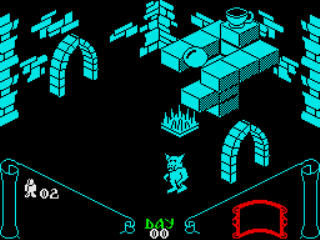 Probably the automatic choice for Number One for most gamers but I became a Speccy owner fairly late and missed out on most of Ultimate's games including this one. I have since discovered it and played it of course, and it's a fantastic game, but it was never going to have as big an impression on me as it would someone who was around when it was first released. The graphics are still impressive though with neatly laid-out rooms, and the game is superbly designed with a great atmosphere. The only thing I don't like about it really is the 'transformation' between normal and werewulf states every few minutes which can get pretty annoying. Knight Lore is still unquestionably a superb arcade adventure though, and one of the Speccy's best. 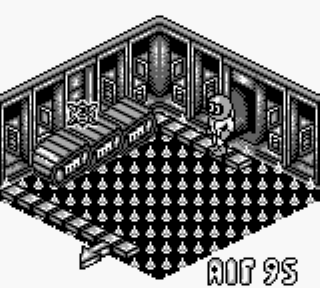 I was introduced to this one by my good friend, Stu, and his brother, and I'm glad I was or I may never have discovered it! Exclusive to the Game Boy and apparently unknown to most gamers, Altered Space stars Humphrey the astronaut and his attempts to find his way out of the alien space-craft he's been abducted by. As you may have guessed, this is done by collecting items and solving puzzles before Humphrey's oxygen reserves expire. The ship has various floors, with each one having oxygen refill points, and there is often more than one way off a floor. The graphics and music here are great and the game is very enjoyable, if a little tough. I've no idea why so few gamers seem to know about this one - I guess it's either secret or universally reviled - but I love playing it! 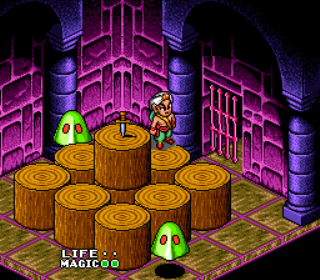 Admittedly I didn't have a huge number of SNES games, but this sequel to the NES's Solstice, programmed by the splendid Pickford Bros, was one of my favourites. It features a sizeable game world spanning multiple areas and each has numerous entrances/exits, puzzles, enemies, and items to collect. All of it is presented beautifully in bold, colourful, well-defined graphics and accompanied by atmospheric music too. The gameplay is pretty tricky at first but once you've armed yourself and gotten used to the controls, you'll start making steady progress. Things can get very tough later on and some rooms require a bit of trial and error to clear but it's a game that's satisfying to do well at. Plus, with those lovely graphics, there's always the urge to see what's in the next room! 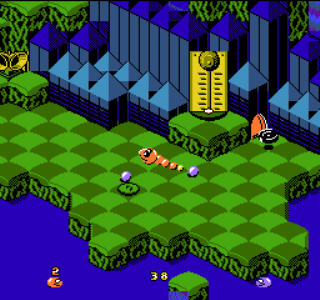 As recent readers will probably know, I never owned an NES so this game is a recent discovery of mine, but what a discovery! I didn't really know what I was doing to start with but I still enjoyed it anyway, and who wouldn't? Featuring really nice, colourful graphics, catchy, jolly music and an appealing main character who's little more than a bobbling head to start with, I soon learned that the object of this unusual game is to eat the little jellybean creatures dotted about the place to increase the snake's number of segments so he can gain enough weight to ring the bell at the end of the stage! Peculiar? Yes! Nonsensical? Sure is, but this is exactly the sort of game I love on the 8-bit consoles - simple, addictive, innocent, fun! Plus, it has a two-player mode too. Just need to find someone else who wants to play it now! 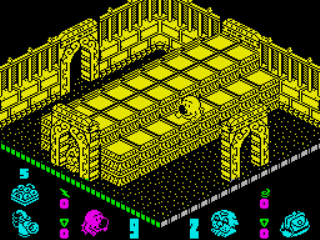 Yes, this classic possibly earned its lofty place at the top of this list for nostlgic reasons as much as anything else, and yes, it may be a clone of a game further down the list, but I don't care, it's still one of the best arcade adventures I've played, and probably my favourite Speccy game of any genre. There are few game characters more endearing than Head or Heels and the superbly designed rooms, many of which require the unique talents of both of the curious creatures, will keep you playing for years. They certainly have with me! The timelessly cute graphics and amusing sound effects certainly don't hurt either. I've never been much cop at this great game though and I've still not finished it, but I'll keep playing it regardless!
Posted by RetroKingSimon at 17:50