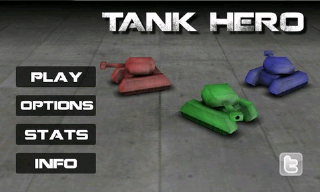 Considering how awesome many of them are, it's strange that tank-based shoot 'em ups are so seldom encountered. The last one I really enjoyed was Mass Destruction for the Saturn but this new Android release drew its inspiration from a much earlier source. Whilst the tanks it uses may bear more of a visual resemblance to those found in the Saturn game, the game itself plays more like an update of Tank, Atari's popular arcade game from 1974! It's set in a series of enclosed arenas but there's no story or detailed instructions of any kind. All you need to know is - you're in control of a green tank, and every other tank is the enemy. 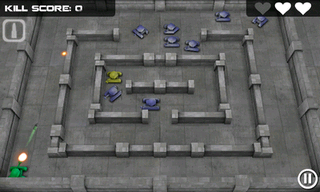 There are two modes of play available - Campaign and Survival. The former consists of forty stages, each viewed from an angled overhead perspective and having different, mostly rather maze-like layouts. Dotted strategically around these stages are various enemy tanks. To begin with you'll just face off against blue tanks. These aren't very tough to beat but as you progress through the stages you'll start to encounter other coloured tanks, with the colour determining their strength, intelligence, or attack method. The Survival mode, meanwhile, is pretty much the same sort of thing except you'll be taking on wave after wave of enemy tanks in the same arena. 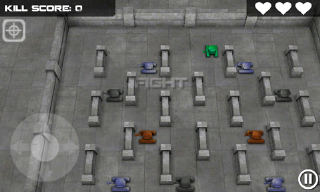 Unlike their Campaign mode counterparts, the tanks in Survival mode appear in random positions each time, but tanks in both modes are dealt with in the same, rather unscientific way - kabooom! Your tank is equipped with a 'Stock Cannon' which fires basic, explosive shells from an unlimited supply. These can be bounced off walls (just the once) to enable you to literally shoot round corners! This cannon is the extent of your armaments in Campaign mode despite the ever-increasing weaponry of your opponents, but in the Survival Mode you can buy additional weapons. Credits earned from tank destruction can be spent on a Spread Cannon, a Homing Cannon, and most impressively, a Howitzer. The first two are fairly self-explanatory but the Howitzer, besides causing substantially more damage, also has the ability to shoot over walls! This is great when it's you who has it, but not so great when the enemy's snagged one. 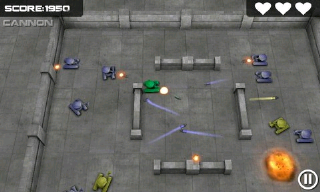 In fact, that's the only thing I don't like about this game. It's fine in Survival mode where you can blow the crap out of everyone on equal terms (besides being dramatically outnumbered of course) but in the Campaign mode it can get pretty annoying! The red enemy tanks are the ones you have to watch out for. Their arrival pretty much heralds the end of the careful, strategic approach and instead sees you rushing around avoiding the aerial bombardment while trying to fire off the odd shot yourself. It's great fun taking out the normal tanks though and aiming a perfect shot around a corner to take out a hiding tank is very satisfying! 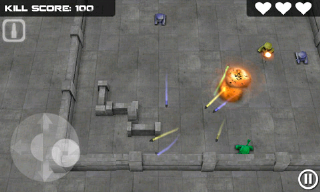 It's a very polished game too. The graphics lack variety but look superb, especially the explosions which also sound great, and the atmospheric music reminds me of Return Fire. The gameplay is aided by several possible control methods, including 'swipe' and virtual d-pad (although sadly no motion-sensitive movement) so you're likely to find something you're comfortable with, and you'll probably be sticking with it a fair while too. It's possible to unlock new arenas for the Survival mode and new features will be released via download regularly, apparently. Oh, did I mention that it's free? That's right! It's hard to complain about anything here when it doesn't even cost you anything but with a few tweaks it could've been one of the best Android games around.

Special Note: For the first time here at Red Parsley, I've decided to revise a review score. After writing this piece I continued to play Tank Hero but those f*cking red tanks just ruin my enjoyment of it. They are annoying and unfair, even if the game is free, so I'm knocking some points off, sorry!
Posted by RetroKingSimon at 19:32