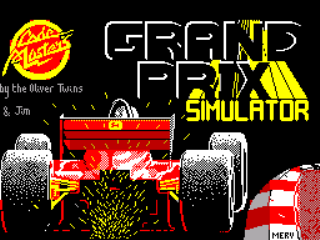 Although they'd been around for quite some time before-hand, the popularity of overhead racing games can be largely attributed to Atari's Super Sprint, but despite the fact that it received good quality official conversions to most home systems of the time, lots of other companies still tried their hand at making similar games. Enter Code Masters who around this time were making a good name for themselves with their mostly decent range of budget games including their trademark 'Simulator' series. It didn't take them long to realise that Super Sprint and the 'Simulator' series were a perfect combination and so Grand Prix Simulator was soon born, courtesy of the splendid Oliver Twins. But how could a mere budget game stand up to a well-established arcade behemoth? Very well as it turned out! 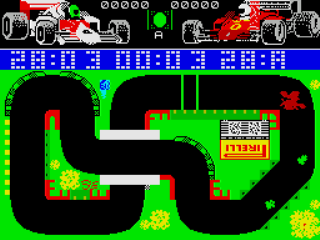 As with most Codies games, the presentation here is of a high standard. The title screen allows you to redefine the keys, which is handy, but also features a decent bit o' Speccy music and there's even some digitised speech too! In-game, things are also of a good quality. The game does indeed look and play like the classic Super Sprint with races contested over a series of circuits viewed from directly overhead. There are just two cars in each race this time - yours, obviously, and another which can either be controlled by the computer or a second player. The only problem here is that both cars look identical, even their colour, so it can get a little confusing when they are close together. The "cunningly designed" circuits are pretty creative for the most part though and feature lots of hairpins and chicanes as you might expect. 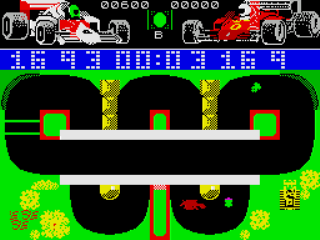 Perhaps the most surprising thing about this game is that it features more circuits than Super Sprint itself - fourteen to a mere eight in Atari's older effort. Graphically the game is very neat and tidy. The courses look nice and are very colourful, although this inevitably leads to some colour-clash, but with just the two little cars moving around here it doesn't cause any problems. Control over the cars is great and even features some un-F1-like powersliding around corners! It is possible to get stuck on track-side objects and, even more annoyingly, under bridges, which can take some time to correct as you can't see your car, and can often ruin your chances of winning. If it happens on the last corner of the last lap, it's especially frustrating! That's pretty much the only negative here though, and considering this was a budget release, that's pretty damn impressive!