In my time as a gamer I've owned, or at least used, most of the major computers and consoles, but of the ones I haven't, I think the NES was the most seriously neglected. I'd like to think over the course of the last couple of months I've gone some way to making amends for that here at Red Parsley. With the help of some of my fellow bloggers I've tried and enjoyed many games for the system (although surprisingly still not some of the biggest names), with each instalment featuring the recommendations of one of them. This is the final part of the series and it features the games recommended by Bryan Ochalla (check out his great blog here). So, thanks, Bryan, here's how I got on with your recommendations! :) 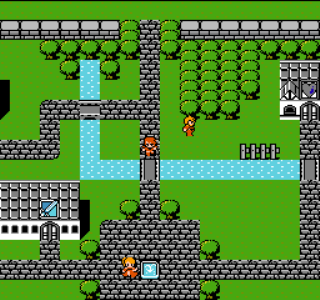 Of course, I've heard this one mentioned infinity times over the years but, and this is a bit of an embarrassing admission actually - this is the first time I've played any Final Fantasy game! I did nearly get caught up in the hysteria surrounding the seventh game but the one that started it all off is a very different game, as you might expect. I've heard that it's not aged well and, although I haven't spent a huge amount of time with it yet, I think I've got a pretty good feel for the game and have to agree with that assessment. The graphics and music are quite nice but it's very basic as RPG's go. Of course, it was one of the first ones so it's nothing to hold against the game but to be brutally honest I just don't often have the time for games like this these days, as much as I'd like to. Still, it saved Square and was a smash-hit so I'll persevere for a while more out of respect... 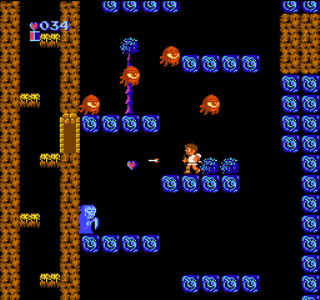 I really didn't know what to expect from this one. I've heard of it, of course, but that's about it. It was developed alongside the great Metroid and has never really emerged from the sizeable shadow cast by Samus' first adventure but, as I've recently discovered, that shouldn't suggest it's any less deserving of attention. It's much more of a 'proper' platformer than Metroid but is noteworthy for other reasons. The stages, for example, are vertical and charge you with climbing to the top of each to escape the Underworld and defeat Medusa. It's a very difficult challenge, notoriously so in fact, but it's an enjoyable one too. The graphics are pretty nice and it has perhaps the catchiest music since Bubble Bobble, but the thing I liked the most about it is the intricate stage design. A little frustrating but playable and very addictive. In fact... hold on, I'm having another go! 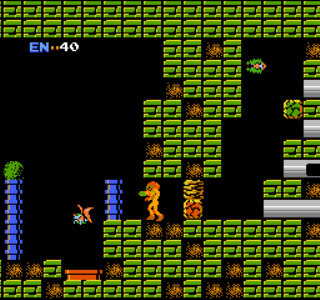 Talking of Metroid! It's notable for being one of Nintendo's first games that was aimed at an older audience, and I was particularly looking forward to giving it a try, so I'm glad someone recommended it - thanks Bryan! I bought Super Metroid for my SNES on a whim many years ago, not knowing much about the game, and was soon blown away by its sheer brilliance. This game was obviously less of a surprise but I was still impressed by how similar it is to its bigger brother. It looks and sounds atmospheric and (probably) involves a very lengthy challenge. Like Final Fantasy, it'll take a lot longer than I've given so far to see everything this one has to offer (I still haven't even finished Super Metroid!) but I love to get stuck into a good arcade adventure like this so I'll make sure I give it a few... weeks! Blimey, this one's a toughie, isn't it?! I remember its great reviews in magazines of the day so I knew it was good but as far as Disney games are concerned, I was brought up on a diet of flashy but not especially challenging offerings on Sega's consoles so I naturally expected this to be similar. However, whilst its basic gameplay and audio/visual style may resemble those games, I found it quite a bit more difficult. It did help when I worked out how to defeat the enemies though! The object here is simply to help Scrooge McDuck collect lots of treasures and these are found both in treasure chests and hidden in scenery throughout the game's five stages which can be tackled in any order you want. I think I prefer Lucky Dime Caper on the MS but this is still an entertaining platform adventure which should keep me occupied for a good while. It did seem to be blighted by some rather serious slow-down though, or is that just my PC? 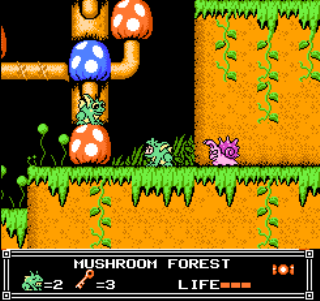 I didn't know anything about this one, or even the comic series that inspired it, but the presence of 'Nemo' in its title suggested to me that it might be a water-based adventure of some description. Clearly I was very wrong, for it seems that the comic and this game follow the dreams of Nemo, a young boy who's on a quest to reach Slumberland and the princess that dwells therein. The stages are large and laid out in a non-linear way and, being dreams, are also rather surreal at times! To finish each, Nemo must find several keys and unlock the exit. Each stage includes lots of scary animals but some can also help him - by feeding them candy, he can assume their characteristics! It's a great idea and adds some variety to an already enjoyable game. It looks nice too and has some catchy music which help prolong the appeal of this interesting game further.

So, that's the NES explored! My thanks to Eric, Sean, Stiggy, and Bryan for their recommendations for this feature. Next, I'll be moving on to a very popular but older console that was a little before my time. Let the exploration commence!