It takes a special kind of actress to convincingly pull off the role of a 'tough-chick'. Some, such as Michelle Rodriguez (one of my favourite actresses), are almost exclusively cast in such roles, and whilst it's clear she could beat the living crap out of any woman, and probably most men too, she doesn't actually do a great deal of arse-kicking in her films (not even in Girlfight). Others, such as Sigourney Weaver, particularly in her Ripley guise, prove themselves to be more than the helpless girly they initially appear and can rise to the occasion when needed.

However, the kind of female heroine that can not only take care of themselves but also lay waste to scores of bad guys whilst still looking good? That takes a special talent which goes beyond merely learning a martial art, sword-handling, or gun-play. They have to be good actresses, of course, but it's also an attitude or aura they project. You just know, even if they're only talking, that they could take out an entire room of sneering, gun-wielding goons in the blink of an eye and then continue chatting away as if nothing had happened. Some actresses look ridiculous trying to act tough, but for others it comes naturally. Here's my personal Top Five toughest:

Possible Spoiler Alert: this feature obviously assumes that you've seen the films in question so don't come whining to me if they ruin a film that you haven't seen yet!

The only lady on the list whose repertoire doesn't include a blade of some description, Trinity (Carrie-Anne Moss) makes up for it by being more than proficient at pretty much everything else! Okay, she has the rather sizeable advantage of being able to upload new skills and combat techniques directly into her brain almost instantly which is probably the only reason she's not higher on the list. That's far from the only thing that makes her a genuine tough chick though. She's an efficient and very creative arse-kicker and I can't see anyone but Morpheus or Neo standing toe-to-toe with her for more than a second, but all that aside, she'd be worth including simply for "Dodge This!"... 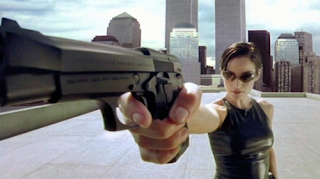 She's arguably the least well-known character in the list but Lady Snowblood (Meiko Kaji) is also perhaps the one with the most conviction. She was raised from birth by a priest for one, single, express purpose - to exact revenge on a group of criminals who murdered her father and brother and raped and abused her mother. It's a just cause, that's for sure, and it's one she carries out with ruthless determination and a complete lack of mercy. The film itself is getting on for 40 years old now but has come to more prominence recently as one of the (many) films that influenced Kill Bill. Its influence is clear to see but it's well worth watching in its own right. 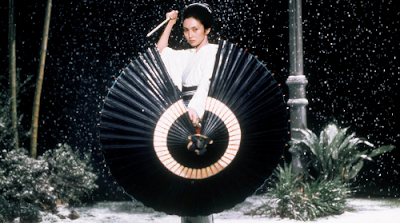 Anyone who told me beforehand that an 11 year-old girl could pull-off this kind of performance in anything remotely approaching a convincing fashion, I'd have thought they were joking, but believe it or not, she does! At time of filming, Chloe Moretz (Hit Girl) was indeed a mere pre-teen and must've only been about four feet tall, but she still managed to get most of the good lines and most of the action scenes! She's a dab-hand with a sword, knives, guns, even her fists. Put it this way - if you see her enter a room full of armed, six foot, muscley henchmen and immediately think "you guys are going down!", then she's done her job! The pint-sized Moretz executes the role (pun intended!) in a thoroughly convincing manner and manages to outshine most actresses several times her age. Like a cross between The Bride and Yoda at the end of Attack of the Clones. 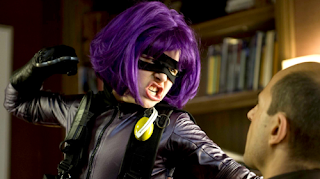 Talking of The Bride... Yes, QT's epic borrowed from a few older films (as most of his films do) but does that make it bad film? Definitely not for me! Like Lady Snowblood, The Bride's "roaring rampage of revenge" sees her cutting open "a helluva lot of people" en route to former mentor, Bill, but there's never a minute's doubt that she'll get there. Ms. Thurman must've trained hard at the swordplay but she definitely possesses the athletic abilities required for the role and she genuinely gives off a menacing air, even when surrounded by dozens of katana-wielding Crazy 88 gangsters. The Bride's trail of bloody retribution leaves severed limbs and corpses across numerous countries but you'll never stop believing in her, or cheering her on! 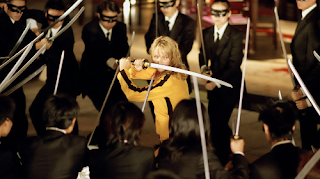 Generally speaking, female ninjas are perhaps not as revered or as feared as their male counterparts but when you see one like Azumi (Aya Ueto) in action, it makes you wonder why! Played by a young and petite J-Pop singer of all people, Azumi's story is not dissimilar to Lady Snowblood's. She is the only female amongst ten orphaned children who were raised from a young age (although not from birth, as in Ms. Snowblood's case) by a wise old man who works for a Japanese warlord. Their task is to assassinate their master's rival warlords which naturally involves a lot of travelling around, slicing and dicing various goons. I'm not sure how well known the two Azumi films are but little Aya Ueto is one of the cutest deadly killers you'll ever see! When she's 'working' she's ruthless and without compassion and her swordplay is unrivalled. 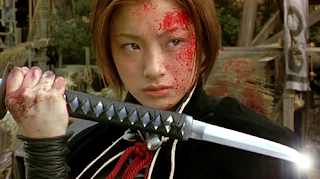