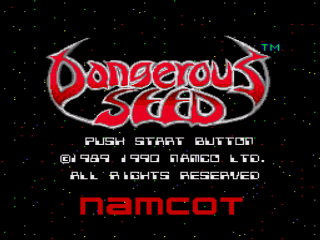 It's not unheard of for a developer to release a seemingly unique game which actually turns out to be part of an existing, popular game series, but it is quite rare. So imagine my surprise when I discovered this interesting-looking shmup is in fact a quasi-sequel to the great Galaga! Indeed, the story follows on from that of Galaga and sees the evil bugs, on the brink of defeat, launching pods at Earth and all the other planets in our solar system before fleeing. These pods contain 'Danger Seeds' which turn the planets into Galaga breeding grounds! Luckily, before the infestation began, three prototype star fighters were captured by the aliens. Unknown to them, the fighters were manned. Now the pilots have awaken, it's up to you to help them wipe out the evil insectoid scum for good.

Sounds like a promising set-up, and with Namco and most specifically the Galaga heritage behind it, how can it possibly fail? Like the arcade original, Dangerous Seed was a Japanese exclusive. I'm not sure why since shoot 'em ups were very popular over here at the time but never mind. As you can see, it's a vertically-scrolling affair (as a Galaga game it couldn't really not be, could it?) set over twelve stages which start off in the base the aliens have built on our poor little moon. From here you must battle through 'tubes' which comprise the first four stages. I'm not sure I want an explanation as to what sort of tubes they are! The remaining stages take place over the planets, from Mars to Jupiter to Uranus (snigger), before moving onto the Danger Seeds themselves.

As hinted at earlier, there are actually three ships available to the player, known as Alpha, Beta, and Delta. You start off in Alpha with the other two becoming available as you progress through the game. Each holds more firepower than the previous one and when they become available they are combined into one to create an even more powerful craft known collectively as the Moon Diver. You can switch around the 'formation' of the three ships which basically changes its shape, putting more emphasis on one of them than the others. Each ship has a shield which is equivalent to a three-hit energy bar. If one is destroyed it's removed from the combined ship, reducing its power in the process. This basically equates to a nine-hit energy bar once you've accessed the third ship. Not bad.

The ships are all equipped with the same weapons as well as a limited supply of bombs. The weapons come in three colours - green, blue, and orange. You'll start with the green forward-firing shot which has average range and power. The blue laser is more powerful but has a poor range, while the orange wide shot obviously covers more of the screen but is less powerful. The three ships use the same weapons but each deploys them slightly differently and as they are gradually powered-up by collecting the appropriately-coloured 'P' icons, you'll also gain access to things like drones and missiles. The bombs are very handy too. They unleash a swirling mass of green rings which home in on any enemies unfortunate enough to be in the vicinity and even these can be powered-up slightly. You only start the game with three bombs but more can be collected during play. You can also collect speed-ups and energy to top up your shield.

The enemies are quite varied and come in airborne and ground-based varieties. A majority of the former are small and fast attackers which are downed with a single shot but there are some larger and tougher craft now and then too. The ground-based enemies are a mixture of stationary guns and crawling creatures which perform pretty much the same function. Each stage does of course culminate in a boss fight. These are larger, tougher, and scarier aliens and they come with some funny names too like Strike Ant, Roller Snail, and Hunter Moth. Chortle! They can take some punishment too. When fighting the first boss, I was pumping him full of green laser death for quite some time without apparently doing any damage. I thought I was simply failing to find a weak-point or something but then - it just blew up! They get a lot tougher though, naturally.

That kind of thing actually says a lot about this game. It's a bit rough around the edges and could do with a coat of polish, but I still really like it. The few faults are not hugely damaging and I really enjoyed playing it through. It takes a while before it gets really tough. For my high-score run (at the top of the review) I got to stage seven without dying, but once I lost the first life the rest soon tumbled as well. I guess this tells you all you need to know about the difficulty curve! It certainly starts out nice and easy though. For example, if you go on a 'suicide run' on the first stage (in other words, fly along in the middle of the screen without moving the ship or firing the weapons), it will be a surprisingly long time before you actually get hit! The enemies soon brush up on their aiming skills though and the screen is quickly awash with lots of fast-moving aliens and their bullets. Luckily, the power-ups are fairly plentiful so it rarely gets too tough.

One reason for a slight grumble is the graphics. They look really nice in screenshots - the choice of colours is good, everything is well drawn, the mostly small sprites are nicely detailed, and slow-down is extremely rare. It's the stages themselves that are slightly disappointing. This is mostly down to the reasonable but not particularly distinctive backgrounds. With most shmups you'd be able to tell straight away what stage a particular screenshot is from but here it's not so easy. The first two stages look quite similar, for example, as do the third and fourth. The planet-based stages are set against an identical-looking space backdrop too. There's some lovely parallax towards the end of the game though, the kind that Gemini Wing could've used! It's certainly not a bad-looking game but it could've used some brushing-up.

The music is better. Each stage has its own tune and they're mostly of good quality but the sound effects let the side down a bit. They're unspectacular anyway but the effect for destroying the aliens is very similar to the one made when your own ship is hit which can cause some confusion when things are busy. As I said though, these are all minor gripes and Dangerous Seed remains a pretty damn enjoyable shmup if you ask me. I've seen it get some good reviews and some utterly damning ones but I'm definitely on the side of the former. Perhaps its association with Galaga unconsciously earns it some cool points but it's not nearly as bad as I was expecting considering its obscurity and poor reputation. It's not a perfect game but it is one I would happily recommend it to any MD shooter fan.