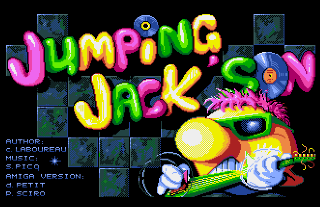 Detailed backstories for games are a given these days, but are often rather justified too. Most of the games of my youth didn't really require one though, especially puzzle games, but that didn't stop some creative programmers from trying. Take this Infogrames effort, for example. It stars the son of Jumping Jack who's on a quest to find the only known copy of Elvis Presley's first ever record which will free the spirit of rock 'n' roll and save the world from the gloom and despair of classical music! To achieve this he must conquer sixteen levels fraught with dangers and save all the great rock records of history from being destroyed by the evil classical instruments who have scattered them around the levels. No, I'm not making this up. 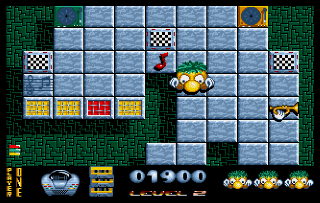 The levels are viewed from above and feature a tiled floor not unlike that of the classic Skweek. You don't have to change the colour of all of the tiles here though. There are certain rows or groups of tiles, often near the edges of the level, and there are also coloured record turntables. Your job is to change the colour of a group of tiles to match one of the turntables. Doing this causes a record to appear which must be collected and taken to the corresponding turntable. Placing records on every turntable on the level opens the exit to the next. The aforementioned classical instruments are out in force to stop you though and include evil trumpets, cymbals, and double basses. Jack can temporarily halt their progress by blocking them in with cassette tapes but they are crafty and unpredictable! 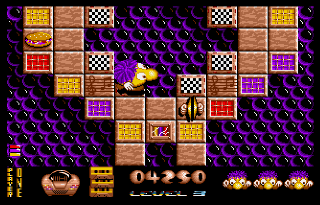 This all makes for a simple but quirky and entertaining game. Jack himself reminds me of the guy from Back Track on the Dragon 32 (except with variable-coloured dreads!) but he, and everything else here, is fairly appealing. The graphics don't feature any fancy effects but are colourful and well-defined, and the sound is even more noteworthy. As you might expect given the game's theme, music plays its own part in the proceedings. Jack's band perform a self-titled track on the title screen while the in-game music is dependent on the records you've collected - each one placed on its turntable adds to the overall tune. The first starts a bassline, the next adds a guitar track, for example. It's a great idea and adds to the enjoyment of the game a lot as there's always an interest to see what the next record will do to the music. 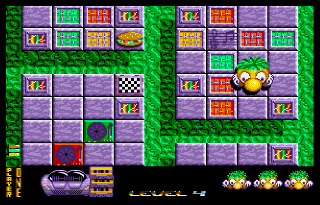 And enjoyable it is too. At first. While it's true that a game as basic in premise as this one could've offered a few more levels, the ones that are here are quite a challenge. The layout of later ones can prove extremely testing and there's also two difficulty levels with the latter featuring a second, harder set of sixteen levels. There's also a bonus level every four levels and some levels feature things like teleporters and conveyor belts to help you move around. The only real problem with the game is that it's rather unfair. The enemies, you see, travel at the same speed as Jack, and can also use the teleporters too, so will consequently sometimes suddenly appear right on top of him giving you no chance of avoiding them, meaning lots of frustrating deaths. Still, at least that means it should last most players a good while. Give Jumping Jack'Son a try if you like games of this type - it's addictive and great fun, but prepare for some teeth-gnashing and swearing too!