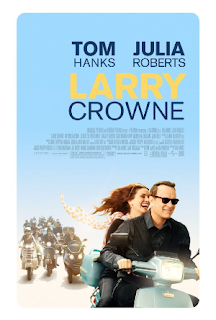 You know, now that I stop to think about it, it's been a long time since I watched a Tom Hanks film. I had forgotten about Charlie Wilson's War until I just had a quick look at his filmography but until then I thought The Terminal was the last time I saw him in what you would call a 'Tom Hanks film'. Maybe it's just me but they don't seem to be the 'events' they once were. This is also true of Larry Crowne. It's Mr. Hanks' second directorial effort after That Thing You Do, which is a remarkable 15 years old now, and sees him returning to the kind of territory in which he first made his mark. That was a long time ago though. He's both older and wiser now, perhaps more distinguished too, but does he still have the charm? The title character in a film like this requires it and it's in this role that he's cast himself. 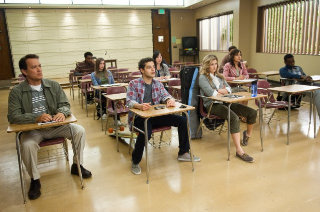 Larry is a divorced US Navy veteran and we first meet him as he's arriving at the big-box store where he works as a team leader. He's a happy and popular fellow and seems to enjoy his job a great deal. Until, that is, he unexpectedly gets the boot. His redundancy is put down to his lack of a college education, so after some time trying to find another job in a similar line of work, he eventually decides to give community college a try where he meets a number of interesting characters including 'free spirit', Talia (Mbatha-Raw), who insists on renaming him 'Lance Corona', her jealous boyfriend, Dell (Valderrama), and the rest of their scooter gang which he is soon invited to join when he ditches his gas-guzzling SUV for some cheaper transport. He also meets the professor of his speech class, Mercedes Tainot (Roberts). 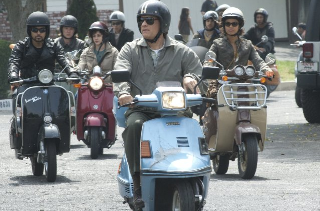 Mercedes is not without problems herself. She's stuck in an unhappy marriage to boob-obsessed blogger, Dean (Cranston), she doesn't care about her job, always hoping that few enough students have enrolled that she can cancel the class, and she spends her evenings drinking and arguing with her husband. Despite all this, neither of them are exactly stretched by their roles where some lesser talents might be. Hanks is consistently appealing in the way he has perfected so well over the years while Roberts is a little annoying at first but is played in such a way that you know it's only a matter of time before her icy exterior is melted and you get to see that foot-wide smile, which is helped by the chemistry the two leads have. 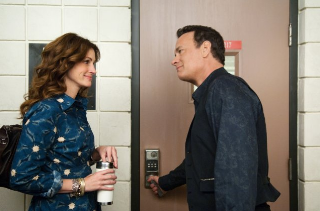 Most of their support is great and includes some memorable characters. Larry's classmates are the usual mix, Cranston is suitably roguish while Mbatha-Raw is radiant as Larry's assertive and quirky new friend while her ever-watchful boyfriend raises a few laughs too. Most of the humour, though, comes from Larry's next-door neighbour, Lamar, who has a permanent yard sale in progress, and also George Takei who makes superb use of his limited screen time as Larry's other college professor, Dr Matsutani. Overall then, Larry Crowne won't be remembered as one of Hanks greatest films or characters, but the film is still great fun and very enjoyable. This is partly down to the universal charm of Hanks himself, which is still alive and well by the way, but there's enough quirky and interesting goings-on here to keep most viewers watching. It's gotten some very average reviews but my wife and I liked it a lot and I'd happily sit through it again.