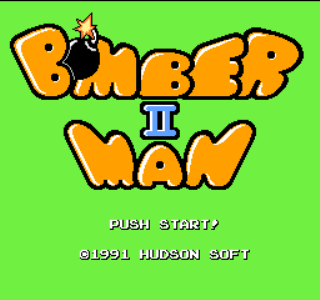 The original Bomberman was a big success and, once Hudson had finished porting it to most systems of the time, the next release in the series was this one. It's the first numbered sequel in the series and was surprisingly only released on the NES this time, although it did make an appearance on the GBA much later. It's of the same style as many of the previous (and indeed, subsequent) games in the series and again sees Black Bomberman up to his tricks. This time he's robbed a bank and framed White Bomberman for the crime! Poor old White Bomberman is swiftly arrested and thrown in jail and it's from here that he must use his bombing skills so he can escape and bring Black Bomberman to justice. To do this he must make his way through 48 stages which are divided equally over six different areas. 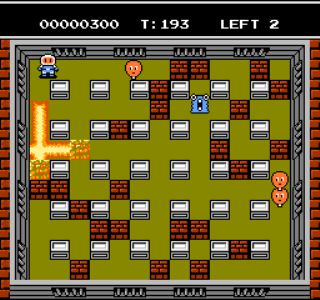 Each of the many stages is filled with a roughly equal number of soft (destructible) and hard (indestructible) blocks. Hidden beneath a random soft block is the exit which will only open once all the enemies on the stage have been destroyed. There's no bosses yet but the cast of regular enemies is the same as the previous NES outing. There's a few new ones though and the power-ups are also the same with the exception of a dollar sign which gives you bonus points (which is presumably swag from the bank robbery!). It's all pretty familiar stuff by now. One of the biggest changes as far as the NES is concerned though, is the graphical improvements. The first game is certainly easily recognisable as a Bomberman game but it was very repetitive, visually. Here, everything is much better drawn and defined, especially the Bombermen themselves, and more importantly the backgrounds are now far more varied. Each 'area' has a different theme and, while they're not as creative as some later games in the series, they're still a big improvement and go a long to increasing the long-term appeal. 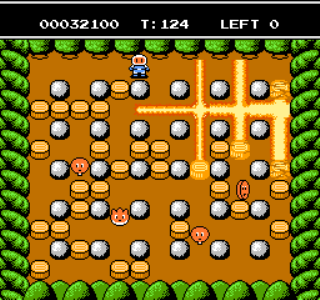 The other big change from the first game is something that it was sorely lacking - a multi-player mode. The single-player mode is great and highly enjoyable, but there is now a 'Vs Mode' for two-player battles and, even better, a 'Battle Mode' in which three players can participate. Both modes are fantastic fun and combined with the tarted-up presentation (there's even an intro and cut-scenes!), they really are the cherry on the cake of a superbly addictive and entertaining game. All the best stuff from the first game returns, including all the classic tunes, but the additions are exactly what was needed to turn a good game into a great one. I suppose it's to be expected considering the six-odd years between releases but it's very welcome all the same. The only bad thing really is that Bomberman II was, aside from a spin-off which I'll look at later, the last game in the series to see an NES release. The series would go on to greater things on other consoles, but for NES fans this is as good as it got, and that's very good.