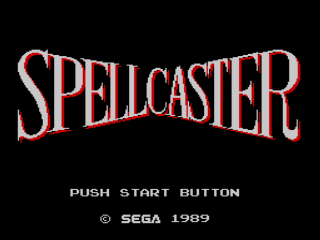 If there's one criticism you could level at the Master System, it's the rather meagre size of its software library. Many of its games were arcade conversions, others could also be found on systems such as the MSX, NES, and PC Engine, but one thing it also had was a few exclusive titles, and Spellcaster is a good one. It's not as unique as I once believed though. As with many Japanese games, it's based on a manga (and later, anime) series called Kujaku Ou (Peacock King) which stars Kujaku, a demon-hunting Buddhist monk. In this Western version he's called Kane and he has been summoned by Daikak, the leader of the great Summit Temple, to investigate mysterious attacks on neighbouring temples, perhaps a prelude to war between rival warlords. His first stop is Enriku Temple where ten guards have gone missing. There are two main styles of play here. The first is similar to a run 'n' gun game which sees Kane moving backwards and forwards between locations, guided by the wise and powerful Daikak, or any information he recovers from other characters. These sections are invariably populated by lots of enemies which include ninjas, samurai, beasts, and even spirits and demons. Kane can fight them using his Ki power which he can shoot from his hands. He can fire weak shots rapidly or charge a more powerful shot, although he's more vulnerable to attacks whilst charging. These sections include various hazards and obstacles and there's also an occasional boss fight. To help you overcome both, Kane can use a variety of magic spells (hence the imaginative title!). 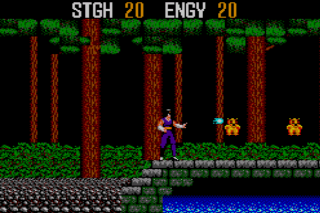 The top of the screen shows two numbers which denote Kane's strength and energy. The former is his life-meter which obviously decreases as he's struck by enemies or their projectiles whilst the latter is needed to cast spells, with the amount of energy required depending on the spell. The first spell you'll learn, and the only one which requires no energy, gives you a password so you can continue another time. The others are all available from the start of the game and are mostly used for destructive purposes, making use of the elements to do so (lightning, fire, wind, etc). Non-offensive spells can restore Kane's strength, provide him with temporary protection from attack, and even allow him thirty seconds of flight. Linking together all these action scenes are RPG-style dialogue and point-and-click sections. 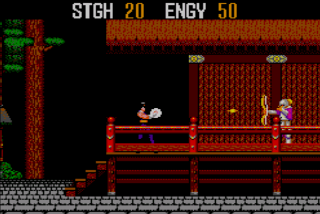 It is here that the story is laid out. Talking with other characters will gradually reveal clues and new leads but there's nothing especially complex involved. A menu with six simple commands (move, use, look, etc) occupies the top-right part of the screen with Kane's image appearing below it. The left of the screen is filled with an image of the current location or character being spoken to, with the dialogue below it. These sections also provide most of the items you'll need to advance in your quest. There's more than a dozen strange objects to be found and they all have a use somewhere. Some examples include a necklace, a fake sword, a lute, a sacred mirror... I won't spoil it by revealing where they are used or what they do though, you can figure that out for yourselves if you play the game! 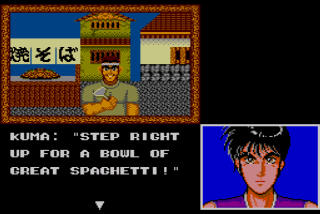 It's well worth playing too. Spellcaster was one of the first games I got for my Master System and I never did trade or sell it. It's not enormously long for an adventure game - a skilled gamer could probably best it in under two hours - but it will last most players way longer than that. Kane's strength and energy can be topped up by collecting the blue and orange spheres respectively that some destroyed enemies drop, and he effectively has infinite lives (if you die, Daikak will resurrect you and you can start the section again), but the game still gets pretty tough pretty quickly. There are some unfair deaths - you can be knocked down a gap by an enemy, for example, which equals instant death, and some trial-and-error is involved now and then too. On the plus side, the enemies constantly respawn so if you get really desperate you can spend a while killing them over and over, building up your strength and energy! 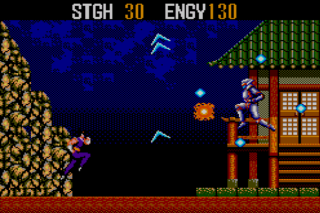 Overall though, Spellcaster is a fairly well-balanced game. It's not among the Master System's best looking titles but it's far from the worst as well. The various static screens (as found in the 'adventure mode') are pretty nice and feature some memorable characters. The action scenes seem repetitive to start with, mostly consisting of backgrounds full of trees and the same few enemies, but later on there's a bit more variety with the game reaching the sea, a pyramid, and eventually the Underworld where the most evil creatures dwell! Speaking of whom, the enemies are fairly well designed for the most part. Some, such as the hovering fireball that spits out smaller flames, are particularly memorable, and the bosses are all pretty mean (and harder to beat, obviously!). The foreground graphics are a bit of a mixed bag - some are lovely whist others are rather plain, even ugly in one or two places. 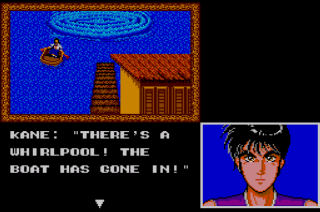 The graphics do create a good atmosphere for the most part though, and this is added to significantly by the fantastic music and sound effects, the former in particular. There's quite a few tunes in the game and they're very moody, adding greatly to the sense of mystery and adventure. Oddly, however, the game sounds different, rather distorted perhaps, when running under emulation. Another reason to play the real thing I suppose! Luckily, I can do that, and do so regularly. I think it's fair to say the game has aged a little now though. Control over Kane seems a little 'clunky' at times, which isn't helped by the meagre animation. Neither does he seem the most agile character ever, but the collision-detection is generally fair and despite the mentioned frustrations, Spellcaster is still a very enjoyable game. Some of the puzzles can seem a little obscure and it's not always obvious what to do next but the story is interesting enough to keep you plugging away until you've finished it. 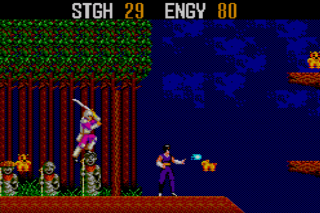 Of course, as with most adventure games, how often you'll return to it after you've seen all it has to offer is debatable, but if you're like me, that'll take quite a while! Spellcaster certainly isn't perfect - games like Shinobi do the action parts better and games like Phantasy Star do the RPG-like elements better, but that doesn't mean you should play those games and give this one a miss. It's an intriguing, atmospheric and playable game, and the combination of styles has been implemented well. There are a couple of other games based on the Kujaku Ou series (on the NES, of course). I haven't played them yet, maybe I won't be able to given their Japanese text content, but they'd be hard-pushed to be better than this great game. One of the trusty Master System's best exclusive titles.