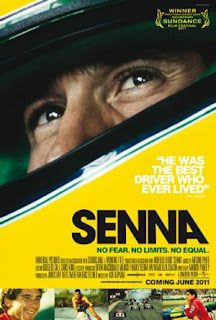 Tagline: "The legend of the greatest driver who ever lived"

Formula One has always been a popular sport here in the UK. We've produced a good number of skilled drivers and won lots of world titles. Also, unlike many sports that we've created or helped to pioneer, we've actually remained successful at it until the present day. However, I don't think the sport has ever been more popular than it was in Brazil during Ayrton Senna's rise. He was a naturally gifted driver and a born competitor who, with his parents help, pursued his passion from an early age, and soon rose to prominence in his homeland. This documentary by Brit, Asif Kapadia, who is more normally found directing arty dramas, follows the career of the Brazilian legend from his promising arrival in Formula One in 1984, through his most successful years, right up until his untimely demise ten years later. 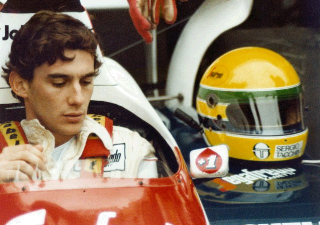 Quite a bit of the compiled footage here obviously includes highlights of some of Senna's more notable races. This has been gathered from a mixture of on-car cameras as well as the more common aerial views. After quickly readjusting to the inferior image quality of the day, the screen is practically throbbing with the loud, energetic racing action, and never more so than thrilling car-cam shots. Shaky and flickery they may be but never has racing action seemed so intense and visceral, to me at least. Of course, the action isn't all car-based. Kapadia himself doesn't speak or appear on camera but there's interviews and narration from fellow professionals, both drivers and pit-crew, family and friends, including Sid Watkins who was F1 safety chief, on track medic, and Senna's friend. 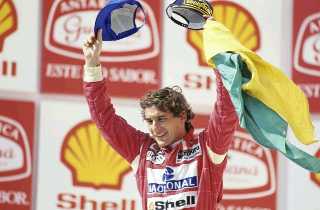 If you followed F1 closely around the time documented here, there's probably not too many major revelations but that's not really what it's about either. It's very enlightening to see pre-race drivers meetings, press conferences and the like, and there's a lot of footage that even the biggest fans won't have seen. They show another side of Senna which I for one wasn't fully aware of and reveal a man who disliked the internal politics that were developing in the sport at that time. Also covered extensively, of course, is Senna's epic rivalry with French driver, Alain Prost who is not portrayed in a particularly flattering light here. Despite also being a supremely talented driver, the fact remains that Prost was just a different kind of competitor to Senna, and the personality clash, both on track and off, is there for all to see. 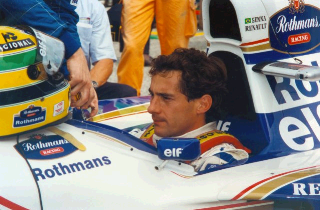 The Brazilian people are very selective about who they idolise. It takes a lot more than mere talent or positive results (unlike here in the UK!). Was Senna the greatest driver of all-time? Statistically, no, but he was without question one of the purest racers there has ever been. He was extremely passionate (in defence of his aggressive driving style: "If you no longer go for a gap, you're no longer a racing driver") and yet he was also very humble. He was very patriotic too, as most Brazilians are (I should know - I'm married to one!). He grew up with a reasonably well-off family for Brazilian standards, his story is certainly not a rags-to-riches one, but unlike some, he never turned his back on his heritage and instead embraced his culture and in so doing, helped to share it with others and quickly became a genuine idol in his homeland. 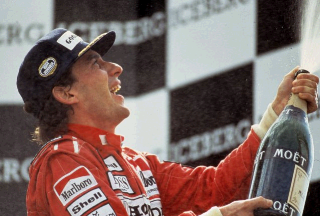 It's always sad when someone dies before their time. Is it sadder if that person is famous? I'm not sure about that. It certainly affects more people. However you look at it, there's no doubt that Senna was an amazing talent and an amazing man. He wasn't perfect, and this film does neglect to mention some of his less-than-stellar moments, but it also shows superbly just the kind of person he was, on track and off, and contains a lot of prophetic and reflective moments (Prost: "Ayrton has a small problem. He thinks that he can’t kill himself, and that’s very dangerous"). He was already a living legend around the world and worshipped in Brazil long before his death. He was exactly what his people needed at the time they needed it, and that's reflected in the reaction to his passing in his homeland - his funeral was attended by more people than any other in Brazilian history and the date of his death is now a national holiday there, for example. 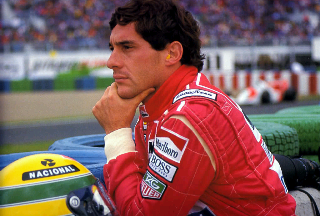 I personally didn't know a great deal about Senna before watching this film. I'd seen some of his races when I was young, of course, and I remember the tragic weekend of his death (which also claimed another life and nearly a third). I must confess, I've sometimes wondered if his legend has been exaggerated because of his death. After watching this engrossing documentary, however, I find myself filled with the utmost respect and reverence for a great man. The film is profound and very moving and I'm not the only one that thinks so. While watching films at the cinema, people usually flood out of their seats the second the credits start rolling. When my wife and I watched this, not a single person moved. Even when the credits had finished and the lights came back on, the theatre was still half full. Oddly, I can't think of a better way to stress the effect this film had on us or the respect that Aryton Senna commands.