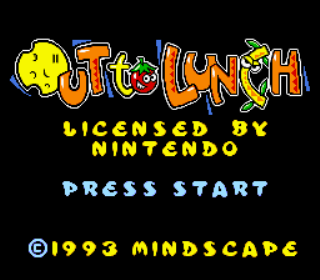 Food's involvement with video games can be traced back as far as Pac-Man and similar games with their collectible cherries and other fruit bonuses, but how many games are there whose central theme is food-related? The first one I can think of is Data East's Burger Time, released more than a decade before this game, but whichever was the first and however many there have been, Out To Lunch must surely rank as one of the 'foodiest' games yet (okay, not counting modern games like Cooking Mama)! The star of the show is Pierre le Chef who is touring the globe to show off his famous dishes. Unfortunately, his ingredients have staged a revolt and all escaped from the fridge! The resulting adventure sees Pierre chasing his various foodstuffs around the world over forty-eight themed stages, trying to recapture them all in time. 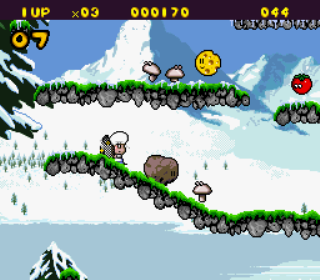 At first glance, Out To Lunch seems like a fairly bog-standard side-viewed platformer, and it is for the most part. The stages are spread over six countries - Switzerland, Greece, West Indies, Mexico, China, France - and each features the kind of foods you might associate with it. Switzerland, for example, includes cheeses, the West Indies has pineapples, Mexico has jalapeños, etc, while some other 'stock' foods like tomatoes and mushrooms appear in several countries. The stages are large, sprawling affairs, usually about two screens wide and several screens tall, and consist of lots of platforms of varying sizes. The foods are scattered all around each stage and must be captured and taken to a cage. There are springers strategically positioned here and there to enable Pierre's rapid exploration and there are a few other items too. 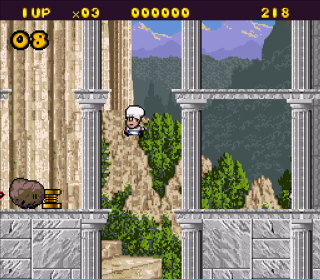 To begin with, Pierre must locate the net. This is necessary before he can capture any of the rogue foods but it's not easy. When you get within a certain distance of each piece of food, it will run (or hop) away from you! Jumping on their head will stun them for a short time, enabling easier capture, and there are some items which will help you do the same from further away. Bags of flour can be thrown at the foods and you can also hit them with the wooden spoon or scorch them with the hot sauce which has the same effect. Being a platform game, there are of course also icy parts here and there which cause Pierre to slip around. Collecting the cleats gives him a break from this and there's also a golden apron which gives him temporary invincibility as well as some dessert foods which are just for points. When available, these items all make your food collecting exploits a little easier but there is of course a few enemies to spoil it. 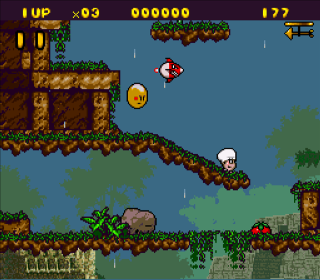 These take the form of bacteria and bees which start appearing as you advance through the game. They can be dealt with by jumping on them but if you leave them hanging around long enough, they'll infect any foods they touch with their evilness! These 'evil foods', as well as the enemies themselves, will cause Pierre to lose a life if they touch him. They can be turned back toward the light by stunning them but if you jump on any evil foods they will be destroyed forever. There are a set number of foods on each stage that you must collect before the exit appears, and each stage initially features more than enough food, but if too many of them are turned evil and eliminated, there may not be enough left to finish the stage. On top of all this, Pierre's rival and enemy, Le Chef Noire, will appear on some stages and try to sabotage his competitor's efforts! A strange noise heralds his arrival and he will immediately make his way towards the cage. If you've dropped any captured foods into it, he will open the door, allowing them to escape! Luckily you can see him off by jumping on his head but he can cause real problems as the stages get larger and more difficult. 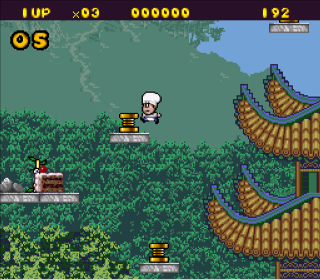 Out To Lunch is a big game too. Some stages have teleporters to help you move around them quicker but it still took me a good while just to reach the second country nevermind the last! Easy progression is hampered a little by the various enemies but they're rarely more than an inconvenience. The real challenge comes from the rather strict time-limit which means that quite often, particularly later in the game, you'll run out of time on your first attempt at a stage. The need to practise and explore the stages certainly increases the longevity of the game though, and it rarely feels like a chore. This is partly due to the superb presentation. The graphics are a little Amiga-esque so it may come as a surprise to find that, whilst it did appear on the Amiga, it did not originate there. The sprites and foreground graphics are small but cute (especially the amusing foods) and well-detailed, and the backgrounds are really nicely drawn. There's great attention to detail too. For example, as you climb higher up the Switzerland stages, it starts snowing and the platforms start getting icy! 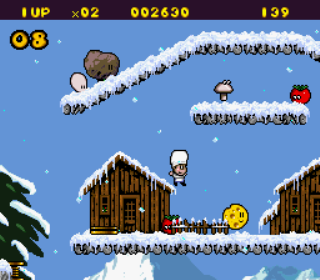 Each country has two tunes which it alternates between and for the most part they are superb. The first Switzerland tune is one of the catchiest pieces of game music ever! The sound effects aren't bad either and there's also a few more short tunes and jingles too so your ears are in for a treat as well as your eyes! As for the gameplay - I mentioned earlier that this is a bog-standard platformer, and it is in principal. It's not particularly original or innovative in how you play it, but its premise is certainly very unusual. How many games charge you with running around after animate foodstuffs with a butterfly net?! As well as its very characteristic look, Mindscape have thrown in a good few features and quirks to keep it feeling relatively fresh. It's a game where you have to be quite precise with your jumping. To start with you'll probably be falling off platforms a lot, or missing them altogether, but it's definitely a game where practise pays off. It can also be frustrating but that's far outweighed by how enjoyable, amusing, and addictive it is. It's possible you haven't heard of Out To Lunch but this unique game is among the SNES's best platformers if you ask me. Hunt it down today!