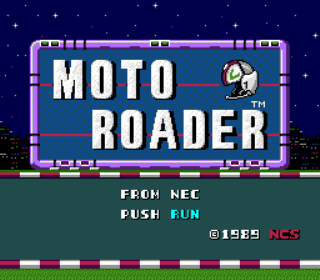 I think it's safe to assume that overhead racing games, as one of the very earliest videogame genres, were fairly well-established by the time this offering was made at the tail-end of the 80's, so in order to be noticed it would have to have something special in store for gamers, wouldn't it? Well, it certainly wouldn't hurt either way and Hudson had just such a trick up their sleeve with Motoroader - a simultaneous five player mode! That's right, up to five whole players can take part in the racing action at one time here and it's for this reason that the game swiftly gained an enthusiastic following. This is another of those games I distinctly remember reading about in magazines of the time, and most of the reviews in question were full of glowing superlatives too so I'm sure I have nothing to worry about here. I can instead relax and enjoy the discovery of another Engine classic! Can't I? 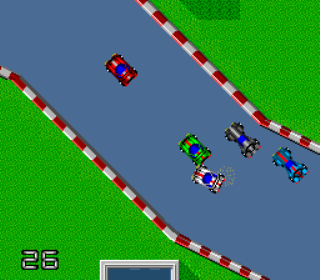 Although you probably wouldn't guess it from the screenshots, Motoroader is actually a game set in the future - 2015 to be precise - but judging by the backstory you could be forgiven for thinking it was quite a bit more distant than that. Mankind, you see, has apparently advanced to such a degree that hunger, war, and crime are a thing of the past and the people of Earth now enjoy a golden age of peace and prosperity. Everything has a downside though, and this 'Paradise on Earth' has left its people rather bored. Until, and I quote, "A sound of thunder! A breath of fire! A thousand horsepower rumbles onto the starting line. A new game is born." I'll be very impressed if we manage to eliminate hunger, war, and crime in the next four years but anyway, this 'new game' they excitedly speak of is in fact, unsurprisingly, the one of the title which sees you and up to four friends or computer-controlled racers tearing around a sizeable number of rather un-futuristic-looking courses. There are seven groups of courses altogether - normal, world 1, world 2, technical, corridor, strange, trap - and any can be selected from the start of the game. Each consists of eight heats in various countries around the world such as USA, Austria, Brazil, etc, although this doesn't seem to make a lot of difference to their appearance or features. The races are contested by the same five cars regardless of how many human players there are so there are no 'drone' cars getting in the way. Each player starts the game with $5,000 and this can be used to modify and improve your car in the shop which appears before each race. Here you can choose between several kinds of increasingly expensive items in various categories such as tyre, body, brake, handle, engine, turbo, and special (which includes bombs and grenades!). More money is of course obtained by racing well and finishing in the highest position possible before your 'gas' (time) runs out, which also earns you points with the obvious aim of winning the championship! 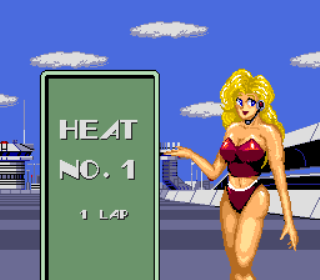 The courses are all viewed from a directly overhead, zoomed-in perspective which means, beyond a few flashing arrows and similar icons now and then, you'll get little warning of approaching turns or hazards. To help combat this, each course is previewed before the race by a little helicopter thing which flies around it, which is very handy and also an example of the great presentation here which also includes nice title and menu screens. The graphics and sound are both a little more disappointing though. The music, for example, is nice and upbeat but there are few different tunes. Likewise, the in-game graphics feature well-drawn cars and courses but aside from the actual layout of the tracks, they all look very similar and are hard to tell apart, and the scrolling is really slow too. I haven't seen every course admittedly, but a few more backgrounds and road-side objects wouldn't go amiss! These don't effect the gameplay too much though of course, but there are a couple of issues that do. 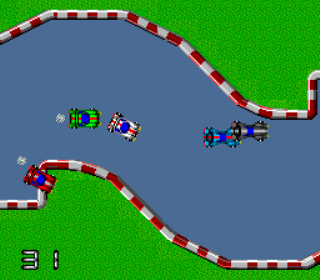 The first thing I noticed when playing this game was the highly annoying and confusing control method where you have to simply press the direction that you want the car to go in. It may sound very sensible but it means that if you're travelling from left-to-right, you press up to turn the car to the left. If you're travelling from right-to-left, however, you have to press down to turn the car left. Considering how frequently the courses can change directions, this, for me at least, resulted in many, many wrong turns! Much to my relief though, I later discovered this is merely the default control method, and some fiddling around on the shop screen can give you the more familiar controls for this kind of game - press left to turn the car left, press right to turn the car right, regardless of which direction its facing. With this super-annoying problem fixed (and Hudson are to be commended for giving the option of changing), however, another reared its head. 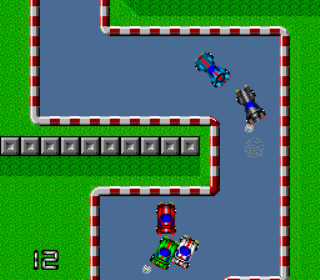 As mentioned, the courses are viewed from a zoomed-in perspective which means the action is shown rather close-up. In multi-player games, if a player's car is about to be left behind and disappear off the edge of the screen, it's automatically 'warped' back into the thick of the action. I suppose this is necessary when one player is faster than another so it's understandable. What isn't understandable, however, is why exactly the same thing happens in single-player games. If your car (the white one, incidentally) or any of the computer-controlled ones fall behind the lead car, it too is warped back. This might sound like a good thing but it really isn't. The main reason for this is that your car is facing the same direction post-warp as it was pre-warp which means that you're often left facing completely the wrong direction which means you immediately fall off the edge of the screen again, and then again, etc, etc, until you've managed to build your speed back up and pointed the damn thing the right way again! This, for me at least, proved infuriating. 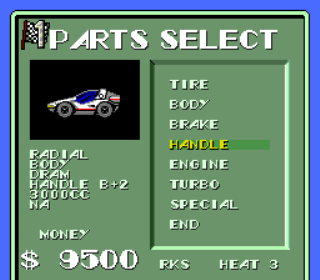 It's even stranger when you think that the PC Engine only has one controller port so, unless you have a multi-tap and additional controllers, you'll mostly be playing the game in single-player mode anyway. I really have no idea why Hudson insisted on retaining this feature for one-player games, it just doesn't make any sense to me. Not only does it frequently interrupt your race but it also usually does more harm than good and also means you're not rewarded for driving well as all five cars are constantly kept very close to each other. It's understandable for the multi-player mode but why in single-player too? At least Hudson had the good sense to prevent the cars from being able to touch each other (they just overlap as if ghost cars), but the courses contain various hazards such as pools of oil and ramps, and various obstructions and split-tracks. The effect of these, or even just running onto the grass, will often then cause the terrible catch-up system to be employed over and over again. 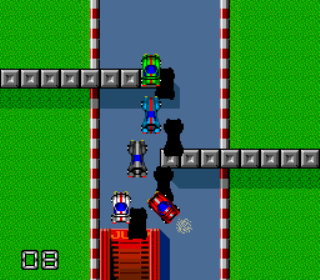 It's a real shame too. After the glowing reviews I've seen, I was really looking forward to exploring another supposed classic that I missed the first time around. There's certainly a lot of potential here - the courses, although repetitive in appearance, can get really big, and there's a lot of them too. They're also well-enough designed to provide a decent challenge, and the car-modifying options add a bit of depth and strategy as well, but I remain rather confused as to why Motoroader is so well regarded to be honest. I can only assume that the reviewers, equipped with multi-taps and lots of controllers, simply disregarded the single-player mode as they had so much fun playing the game with their friends/co-workers, and I'm sure it is great fun. Many gamers will also want to play this on their own though and, while I did have some fun playing it myself, that constant bloody warping ruined it for me. If you have the controllers (and friends) available, give Motoroader a try - at the very least, each player is equally inconvenienced, but in my opinion a solo player will find it a flawed and frustrating experience. But hey - maybe it's just me!