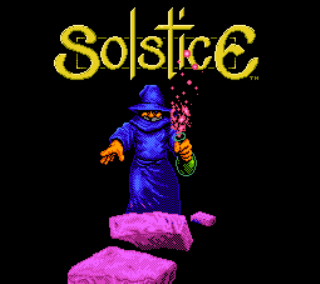 Pesky wizards, sometimes I think they're more trouble than they're worth. It seems that for every good and helpful beardy, there's another who's cruel and evil and generally troublesome. In the case of this splendid British game, released for the NES exclusively, the culprit is an unpleasant fellow who goes by the rather tell-tale name of Morbius the Malevolent who's kidnapped the probably-buxom Princess Eleanor amongst other things. Luckily for all us princess lovers there's a more helpful wizard in the area with the slightly more mysterious name of Shadax who has volunteered to get her back. In order to do this, however, he must find his way through the treacherous fortress of Kastlerock to find the six pieces of the Staff of Demnos, the only weapon capable of defeating Morbius.

As you may or may not have guessed, this is where you come in. The fortress is spread over more than 250 rooms which includes its main floor, the towers, and the gardens. Regardless of their locations though, the areas are all viewed from the isometric perspective that fans of games like this should be used to by now. The gameplay is approached from a non-violent standpoint with most rooms requiring brains from you rather than brawn from Shadax to progress. Having said that, he is a wizard so surely he can bring about some sort of horrific end to any adversaries he may face? Well, I can't vouch for his abilities but progression through the fortress is mainly achieved through collecting the various items that are scattered through it and by solving the many puzzles.

Of course, there are numerous henchmen of Morbius roaming about the place such as orcs, skeletons, even small blobs, but these are to be avoided when possible. They usually move around following a set pattern but some zero straight in on you and there can be a good few of them too, so it's not always possible to avoid them. In these situations, Shadax can use just about the only 'weapons' he has - magic potions, of which there are are four kinds - Blue (invincibility for as long as you're in the room you use it in), Purple (destroys all monsters in a room), Yellow (freezes all monsters and moving blocks in a room), and Green (reveals any hidden platforms in a room). You start the game with two of each kind of potion but luckily more can be picked up through the game.

As you might imagine, these can be at least very helpful and on occasion essential if you're to rescue whatever-her-name-is, so they should be used sparingly and only in the utmost hour of need, particularly the purple one as in some rooms you need the unwitting help of the monsters to solve a puzzle! Of course, the rooms contain more than just monsters, as you can see. There are moving platforms, stairways, conveyor belts, and things of that nature, but nearly all the rooms feature various arrangements of blocks, whether fixed 'concrete' ones or 'loose' moveable ones which Shadax can pick up and reposition. The blocks often create stairways themselves but however they're positioned, navigating your way around them often forms the basis of the puzzles.

Shadax can only jump the height of one block and he can only carry one moveable block at a time, and even then he can't take it into another room, so conquering some of the rooms can require some fairly intricate movements and daring strategies! To that end, there's several special jumping techniques that should be learnt and it's also worth experimenting with where you can and can't place the moveable blocks. For example, they can be used as stepping-stones to get across one kind of spikey floor but not another. There's a few items dotted around to make things a little easier too. The first one I found, which proved to be a very useful one, was Magic Boots which doubles the height Shadax can jump. There's also keys, extra lives (in the form of hats), credits (which act as both continue and restart points), and extra potions.

Something that can really help the enjoyment a game like this is a sense of atmosphere. The soundtrack here includes a great title screen tune, which actually reminds me of Speccy music (don't let that put you off though!), and a single in-game tune which is a nice, moody number but it does grate after a while, especially considering the lengthy sessions this game might command! The graphics aren't bad either. There's not much variety through the game, admittedly, but everything is quite small and nicely-defined. The sprites almost look super-deformed (which is odd since this isn't a Japanese game!). The colour-scheme is pretty appealing too, I like the style here a lot which does indeed create a great atmosphere. The only real problem is that there are no shadows so depth perception can be a problem and does cause a few otherwise unnecessary deaths.

Solstice presents a pretty tough challenge overall but it's also one of those games that you can't help but try one more time if you get stuck. Thankfully you shouldn't get stuck as often as you otherwise might - control of Shadax is good and the items and enemies in a room are reset if you leave and re-enter it. The fortress is laid out in a non-linear way but there's an approximate routine that you'll need to follow to achieve your goals so it will take a good while to finish, particularly as there's no password or save feature! You do get a count of your total rooms visited as well as a game completion percentage at the game over screen though so at least you'll know how close you were! You'll rarely get too frustrated though and playing it takes me back to the wonders of playing Head Over Heels on my Speccy. Every time I played I was sure I could get just a little further, see one more room, and it's the same thing here which is surely the mark of a very well-designed game. Another superb NES exclusive which is rightly considered a classic!