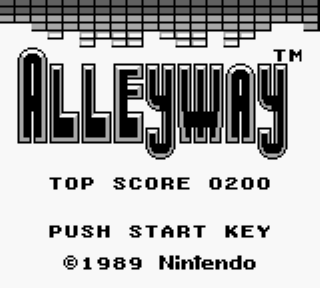 For some reason the Game Boy's launch is one that I still have very clear memories of. Maybe it's because it was one of the few console launches that enticed me enough to buy the system in question. Actually, I think it was the unanimous praise being heaped on Tetris that most persuaded me, but what of the other launch titles? I didn't get around to playing many of them but I do remember they all looked ideally suited to the little grey handheld including this Breakout clone developed by the Game Boy designer himself, Gunpei Yokoi. It literally is a Breakout clone too, with everything being kept very simple by Nintendo's legendary designer. Games have come a long way since Atari's classic though, even ones of this type. Could he work the same magic on games as he could on the system that hosted them? 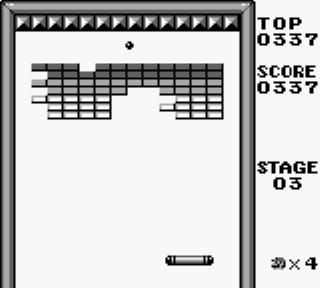 Well, things certainly look suitably Breakout-ish to begin with. You're presented with a group of bricks, twelve wide by seven high, pressing fire releases the ball, and you must continually deflect it with your bat at the bottom of the screen, which is apparently piloted by Mario (sigh), until all the bricks are gone. That's it. Despite waiting for something to happen, nothing did. So, taking the little bricks out, one-by-one, is your sole job. The next stage sees a similar arrangement of bricks continuously scrolling across the top of the screen. Other than that it's the same routine as before. The next stage initially appears the same as the first but then the ceiling starts to slowly descend. Then, something did happen - a bonus round! These occur between every three normal stages and actually see the blocks collectively form more interesting shapes such as Mario and other characters from his games. 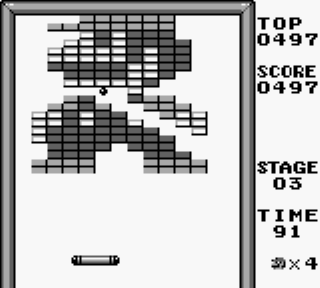 These bonus stages are timed and increase the power of your ball significantly. It's now capable of ploughing through all bricks in its path until it's rebounded by the wall as usual and you can't lose a life on these stages either. There are twenty-four numbered stages in all as well as eight bonus stages and later stages sprinkle a few indestructible bricks amongst the normal ones, but this is pretty much the extent of the variety between stages. After the twenty-fourth stage the game will loop back to the beginning. The graphics are very limited and rather lacking in detail as you might expect. One of the differences between Alleyway and Breakout gives the thumbs-up to Atari's game which does of course have colour graphics! Okay, maybe not the very first version but still! The shades of bricks here have different points values but this is pretty meaningless considering you have always have to destroy all of them anyway. The audio is also far from ground-breaking with minimal effects and infrequent music. 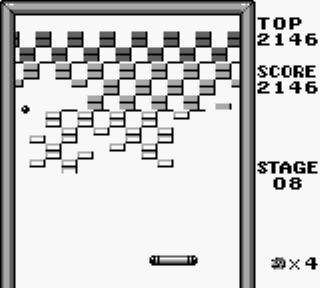 Overall then, to answer the question I asked earlier - regrettably it appears that the great (and, sadly, late) Yokoi-san did not have a limitless talent. He's made some great games of course, in addition to the superb hardware he developed, but this isn't really one of them. It's perfectly playable as a five or ten minute time-killer on a train journey or something like that but it's far too repetitive a game to play for any extended period. Taito set a new benchmark for the genre two years prior to this game with their superb Arkanoid but, far from picking up where they left off, Alleyway is actually a regression. There's no power-ups, no interfering aliens, no creatively designed stages. Nintendo did, however, go to the effort of forcibly injecting Mario into a game that really didn't need or benefit from his presence. He wasn't even featured in the marketing for the game as far as I know either so it's not like it was just done to sell a few more copies. Oh well, I'd stick to Arkanoid if I were you, or if you really need a portable game of this type, go for Sega's Woody Pop instead.