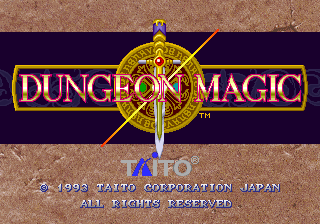 You know, it's pretty amazing when I stop to think about it, just how many games pass by going completely unnoticed by some, and this one is a great example. I like scrolling fighting games and I like nearly anything released by Taito, and yet, somehow, I had absolutely no idea this game existed until a couple of weeks ago! Of course, sometimes games are ignored on purpose as they suck arse, but surely a scrolling fighting game by Taito won't suck arse? It's a fantasy game with a medieval setting meaning there's a good helping of swords and sorcery, and, fittingly, there is also apparently an evil magician on the loose plotting to take over the Kingdom and generally spreading ill-will. He's even kidnapped a big-boobed princess for good measure and it's up to you to get her back!

Before you set off on your quest you must choose between four characters who are all slouching about in the local tavern, apparently in no hurry to avert the danger that lies ahead. They are Ash the Knight, Gren the Fighter, Cisty the Archer, and Vold the Wizard. They each have their strengths and weaknesses but since this game supports up to four players at once, you and your friends can of course choose all of them. Regardless of the size of your team, your goal is to travel the four corners of the kingdom, rescue the buxom maiden, and bring the evil forces to justice. There are four 'scenarios' to be vanquished in all, each of which is divided into thirty short stages. Splendidly, however, you won't slog through them all of the stages in one go as there are various routes through each scenario.

The four playable characters in Dungeon Magic may have different appearances and styles but they all share the same basic moves and abilities. The attack button is used to perform lots of fairly weak attacks such as punches and kicks. Pressing it rapidly will unleash a combo ending with a more powerful strike, and if you're close enough to an enemy you'll also be able to throw them. The jump button allows you to execute flying kicks and the like and you can charge an enemy or group of enemies with the attack button along with a double-tap of the joystick in either direction. You can also perform some special moves by holding down the attack button - hold it for a few seconds to perform a Power Attack, hold it a little longer to unleash a Super Attack, and each character can call forth the power of a magic attack by pressing both buttons at once.

Of course, the specifics of each attack are unique to the characters. Each fighter has their own style and some are more effective with one type of attack than with another. For example, one may be better at long range attacks than close-quarters combat, another may have better throwing or charging attacks, while one (guess who) may have the stronger magic. They can all use weapons - Ash has a sword, Gren a gauntlet, Cisty a bow, and Vold a 'rod' - which can all by upgraded several times over. Some of these weapons bring with them the force of the elements, such as ice, fire, and lightning for increased enemy destruction, and some enemies are more vulnerable to one element than another. Other weapons can be collected along the way, such as axes, spears, etc, which can be thrown just the once and there are five types of shield which protect your precious energy meter from depletion for a few hits.

As well as all the monster-smacking action Dungeon Magic has to offer, there's also a few RPG-lite features here and there. For instance, the characters can 'level up' by collecting the many treasure items you'll find around each stage. These are sometimes left behind by defeated enemies but are also found in treasure chests or by breaking open certain things like crates and barrels. Collecting them gives you bonus points which is turned into experience points and when you pass certain scores your character will advance a level. Your character will also regain some energy when this happens and collecting the food items does the same. Some of the magic items are in hidden or hard to reach areas too, and require sneaky tactics to reach.

You can pick up barrels and crates which may at first seem like handy weapons. They can be used in this fashion, but they can also be stacked up and climbed to reach secret areas with bonuses. There's even a few limited platforming sections too - Taito have certainly done their best to keep things interesting here, and it works! The action begins as soon as you select a character, with your peaceful drink being interrupted by some vicious werewolves invading the White Deer Tavern. From here the game takes in small villages, forests, mountain passes, castles, and dungeons which are riddled with traps like spikes, moving floors, and falling spears, as well as many evil monsters like orcs, lizardmen, goblins, slimes, and beasts like dogs, bats, and serpents. Even some of the treasure chests attack later on! The end of scenarios are home to large boss monsters too.

Taking them all on is very satisfying whichever of the characters you use. None of them destroy all-comers and none are hopelessly out of their depth either, so it's really just down to your own preference. Gren is probably the easiest character to use to start with and its with him that I first played through the game. It's not an unreasonably tough game to play through but is very testing at times. Some of the standard enemies can take quite a beating but if you take too long to move on to the next area some annoying ghosts begin swarming around too! Obviously it helps to clear areas quickly if you have any friends fighting beside you, and this game does indeed offer a rare opportunity for four-player fighting, but the screen can get very crowded if all four players are used. Luckily, the fighters can't hurt each other though, and it's great fun with any number of players.

The audio and visual style used by Taito is also a big attraction. Scrolling fighting games are usually viewed from an angled side perspective but they've gone for a full-on isometric viewpoint here. It's a perspective that works well with adventure games, but a fighting game? I imagine it might cause some problems if the fight mechanics here required greater accuracy but fortunately it's a fairly generous game with regards to that and the viewpoint works well, particularly with the alternate routes through the game. The backgrounds are excellently detailed and superbly drawn too, and the sprites are also nicely detailed and reasonably animated. Each character has a decent selection of moves and some of the special attacks and magics are a joy to watch. I suppose the backgrounds and enemy designs could be a little more varied but this is still a real good-looking game with superb attention to detail and the atmospheric soundtrack and solid effects only add to the wonderful presentation throughout.

Aside from that disappointingly unimaginative story, everything about Dungeon Magic is of a very high quality. This is to be expected from Taito of course, but it's a release that was something of an oddity. It's a kind of game that was rather popular around the time it was released and it bears a few similarities to some of them such as Golden Axe, but it has plenty of its own ideas and is a pretty damn enjoyable example itself. It has four playable characters, a few secrets, and several paths through to its conclusion which means it has great replay value, and the controls, stage design, and presentation are all top-notch so you'll greatly enjoy doing so. Perhaps it's a freak that I hadn't heard of it until recently but I know it's far from a well-known game. Why was it never converted to any home systems? Whatever Taito's reasons are they caused a good few gamers, including myself, to miss out on an enjoyable and addictive brawler which would've gone down a treat.