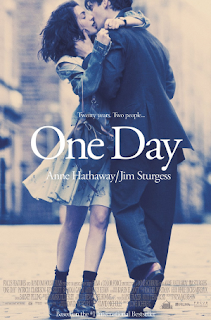 After a sizeable break since my last visit to the cinema I was fully expecting to return this month, swiftly followed by a review of Captain America, a film I remain eager to see. However, circumstances have dictated that I have instead been to see this romantic drama with my wife. This kind of film often scares me but having seen a trailer for it beforehand it didn't look too bad. And I suppose Anne Hathaway's not too bad to look at either, is she? For the ladies there's Englishman, Jim Sturgess, and together or separately they share the vast majority of the screentime as Emma and Dexter whose story has been taken from the pages of the popular novel by David Nicholls (who also wrote the perfectly reasonable Starter For Ten). The film begins on July 15th 1988 (St. Swithin’s Day), the day of their graduation. 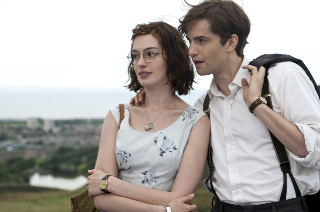 Seeing their respective best friends cop off with each other after their last day at Edinburgh University, the newly acquainted Emma and Dexter decide they may as well do the same. The film then catches up with the two of them, who have become close friends, every year on the same day for the next twenty years. Some years they're together, others not. Some years are eventful, others less so, with each having differing fortunes in their careers as well as their personal lives. They have a strong bond though, which is rarely tested and never broken. It's clear throughout that there are stronger feelings lurking just beneath the surface but it's less clear if either of them will ever do anything about it and, if they do, whether they'll have left it too late. 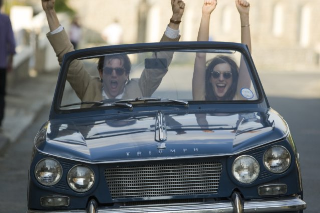 It's a reasonably interesting take on an often rather mundane genre and it's an example which is well acted. Some have a problem with Hathaway's English accent but it's okay for me. Her Emma is a slightly nerdish and lacking in the confidence to pursue her dreams while Sturgess's Dex is pretty much the opposite - a rather roguish ladies man who takes his initial success for granted. At times they seem to make a more convincing best friend couple than they do a romantic couple but they certainly have great chemistry in either case. Support comes in the form of Patricia Clarkson as Dex's ill mum and Ken Stott as his disapproving dad, while Em's side is represented by Rafe Spall who is superb as her failed comedian boyfriend, Ian. 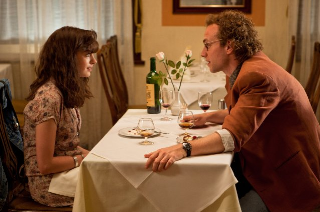 Overall, I found One Day to be a nice enough, if unremarkable tale. It has some appealing characters who are flawed, like most people I guess, but who also remain likeable regardless. The script, adapted by Nicholls from his own book (which is probably why the story wasn't shifted across the Atlantic for once!) includes some witty dialogue and there's a good few memorable scenes, both of a humorous and poignant nature. As a film it doesn't carry the emotional heft of the book. This is often the case with adaptions I suppose, especially 'dramatic' ones, but both book and film unfortunately also suffer from one fairly sizeable flaw which ruined it for me somewhat. Worth a look though, particularly if you're a fan of either star.