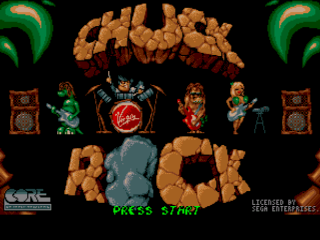 It's not the kind of thing that's easy to check but I believe Hudson's PC Kid was the first major platform game to immerse itself in a pre-historic setting. Since that game was not particularly well known here in the UK however, it's influence is hard to gauge, but it can't be a coincidence that a few more games of that type started appearing soon after, and one of the most well known, at least over here, was Chuck Rock by Core Design. Like many platform games, and indeed PC Kid, the setting is approached in a completely non-serious way. It stars the pot-bellied caveman of the title who is the frontman for a rock band also featuring his wife. One day, however, she is kidnapped by the jealous Gary Gritter and it's up to Chuck to get her back before Gary has his way with her. 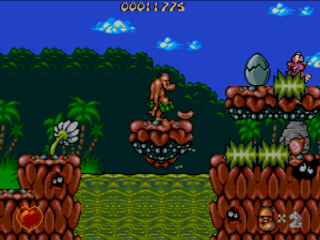 This predictably means an arduous, not to mention dangerous trek over all sorts of testing terrain. The game begins as many platformers do - in a lush, grassy area with trees and watery bits. This example is somewhat more primeval than similar efforts though, and comprises the first of the five levels which also take in underground caverns, jungles, underwater sections, and an icy/snowy level which, as clichéd as it may be, is actually pretty realistic here since the world was likely in the grip of an ice-age at the time! If you manage to slog your way through all of these, the game culminates in the eerie Dinosaur Cemetery. Each of the five levels is split into between three and five stages - some normal platformy ones followed by a fight against one of the five bosses who are, you may be surprised to hear, big lumbering dinosaurs. 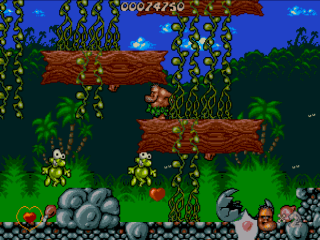 The enemies consist of lots of small dinosaurs, both ground-based and airborne, as well as various other dangerous creatures and hazards like spiky plants. Chuck may be something of a dimwit but he does have two means of attack to see them off. Firstly, the portly fellow can 'belly-bounce' them (or kick if he's in mid-jump). This is enough to see off most non-bosses easily enough but Chuck also has the ability to pick up and 'chuck' the many rocks that litter the stages. These come in two sizes and can be very useful. Carrying them around affects Chuck's walking speed and jumping height but since he holds them above his head, they protect him from airborne hazards such as pterodactyl-like flying creatures as well as falling boulders and things of that nature. He can also stand on them to reach otherwise inaccessible areas and, of course, he can throw them at enemies including the bosses! 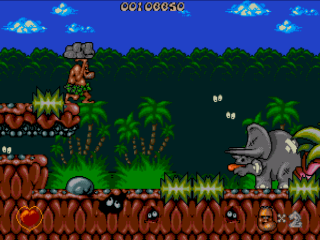 Surprisingly there are no power-ups to improve Chuck's abilities but there are plenty of food items to collect for bonus points, as well as hearts to top up his energy meter. Not all the creatures are malevolent either. There are some helpful beasts such as birds, dinosaurs, and whales that carry him around while others such as frogs, crocodiles, and mammoths act as springers, bouncing Chuck up to higher platforms. Some of the less sizeable creatures can also be helpful such as the small dinosaurs running in wheels to move platforms and lifts up and down. This is a great example of the many amusing touches that fill the game and it's from here that much of its appeal comes. Some of the comedy sound effects grate after a while but some of them are great and there's a lot of humour to be found in the graphics, particularly the many sprites themselves. 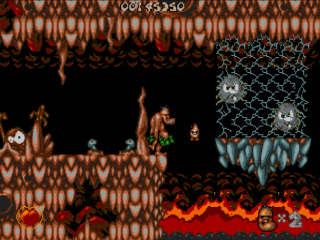 The cartoony enemies are well drawn and animated and most of them are quite memorable. There's all sorts of characters to be found amongst the varied stages too - some of them are relevant to the stage they appear in (sharks and octopuses in the underwater sections, etc) while others are more generic but most of them have a distinctive, goofy look to them. Chuck himself looks and behaves as a typical 'caveman', aside perhaps from his main weapon - his big belly! However, amusing or not, I actually prefer the lovely scenery graphics to the sprites. Most of the backgrounds look really nice and the foreground graphics are very detailed, and both suit the theme of the game superbly. The various tunes are quite good too, although probably not quite as impressive as the graphics. They are more background themes than actual music but are more than pleasant enough. 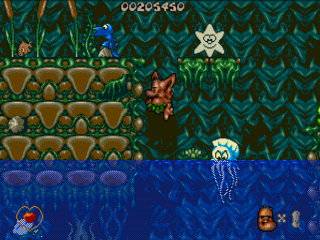 There is, however, little to distinguish Chuck Rock from the masses of generic platformers on the MD, at least at first glance, but it soon becomes apparent that it does have at least one trick up its sleeve - the 'rock chucking', which has been implemented very well. It could've easily been a pointless addition just to allow the use of the catchy name but it's not - not only can the many rocks laying around the stages be used as weapons but you can use them as shields, as mentioned earlier, and they can help you to avoid danger or reach otherwise inaccessible areas as well. It's a good idea which works well and helps to prolong interest in the game which is a fairly sizeable one too. It's not a perfect game of course - it's pretty slow paced, and without passwords reaching the later stages takes a good while, but Chuck's adventure is still an appealing and enjoyable one with lots of memorable moments.