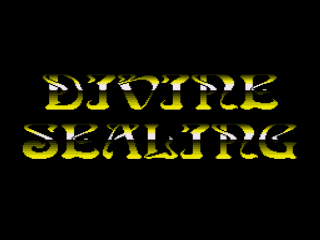 Unsurprisingly, the first entry in this series of features proved to be rather popular so I think another entry is in order! This time, the game in question is a shoot 'em up, which isn't a genre you might think of as a potentially adult one (not even the superb Sexy Parodius!) but this unlicensed release manages to achieve it with ease. Studio Fazzy have somehow housed the promiscuous girlies in a vertically-scrolling shmup, but since it's a Japanese-only game I have no idea why. There seems to be a fairly lengthy story which is detailed before play begins and between each stage where you'll see a scantily-clad young lady before many pages of Kanji text. Luckily it's possible to speed them up, and doing so will finally reveal a game! 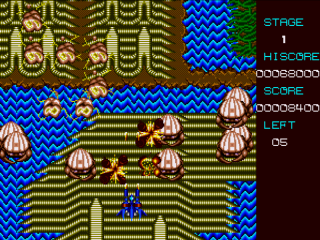 Unfortunately, it's immediately apparent that this is not a game of great quality, and it soon becomes clear that this extends to its design as well as its poor presentation. There are five pretty short stages filled with several types of enemies - small fast things that whizz around the screen, larger formation-flying creatures, similar-sized kamikaze ships which fly straight down the screen at you, the odd few ground-based attackers, and of course a much bigger boss at the end of each stage. All of them seem to take the form of insects or parasitic bugs of some sort, and most of them are pretty tough, nippy little things. If you manage to defeat the boss you'll be rewarded by a girlie who, for some reason, removes her outer garments and poses in various suggestive positions! 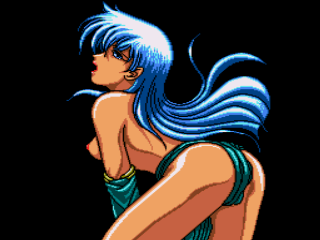 I'm sure you'll know for yourself if these screens sound like they're worth the effort to see but the shmup action that links them certainly hasn't really had an awful lot of effort put into it. For example, the game uses one solitary button on the MD's controller which should tell you all you need to know about its armaments. Indeed, there are no smart-bombs and no different weapons to collect. In fact, there's no power-up icons of any kind to collect. Your ship's weedy forward-firing shot is powered-up based on your score with an extra shot added every 10,000 points - first a rear shot, then diagonal forward shots, then diagonal rear shots, then swirly side things - and you lose them all when you die and they're lost thick and fast once you get past the first couple of stages too. Grrr! 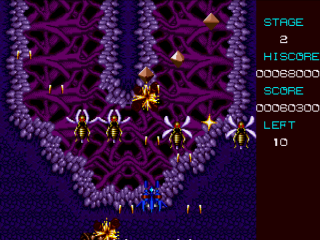 The difficulty curve is far from the most perfectly graded one ever and some of the enemies move too quickly to take down. As mentioned earlier, the presentation is also rather poor and the graphics and sound on offer here would scarcely push a Master System. The sprites are not very appealing and their animation almost non-existent, the weapons and explosions are weedy, and the backgrounds, while quite varied, do little to inspire further play. The same is true of the music really - it's not particularly horrible, it's just rather anonymous. At least it has some though I suppose! So, is there anything good about Divine Sealing? No, not really. As a shmup it's poor in all departments and the worst one I've played on the MD, and if looking at anime hoes is your bag, there's quicker and easier ways of doing it than this!